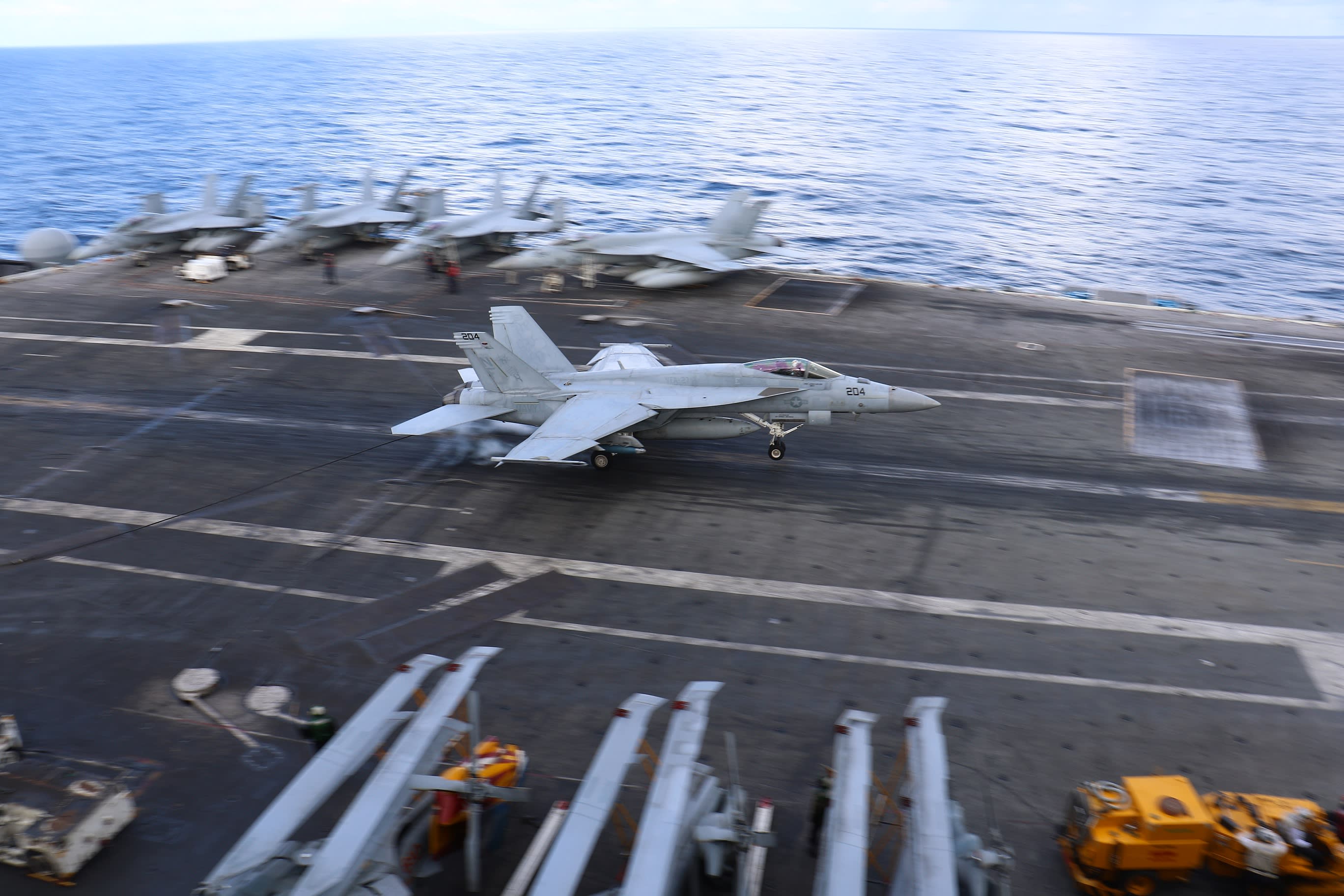 An F/A-18 jet fighter lands on the aircraft carrier USS Ronald Reagan in the Sea of Japan. (Photo by Ken Moriyasu)
Politics

Two US carriers could soon train together in Asia: Admiral

Forces ready to use 'all capabilities' to counter North Korean threats

ABOARD THE USS RONALD REAGAN -- The U.S. aircraft carrier Ronald Reagan, currently conducting a four-day joint exercise with the South Korean navy off the Korean Peninsula, could be joined by another carrier in the coming weeks. Japan, US, South Korea agree to add pressure on Pyongyang

Rear Adm. Marc Dalton, the Carrier Strike Group 5 commander in charge of the Reagan and its supporting ships, told reporters on Thursday that the USS Theodore Roosevelt "may very well" train with the Reagan as it passes through Asian waters on its way to an assignment in the Middle East. The Roosevelt left its home port of San Diego, California, on Oct. 6.

"The U.S. is prepared to meet its commitment to protect South Korea," Dalton said when asked about the possibility of multiple carriers operating in the region amid heightened tensions with North Korea. "We will use all capabilities to do so." "The purpose of these operations are to send signals that we know how to operate together in the defense of South Korea and to make it clear that aggressive actions that violate the sovereignty of our allies [will not be tolerated]. We will stand fast with them," Dalton said.

The annual exercises the U.S. and South Korean navies conduct in the spring and summer are usually held in the Sea of Japan, east of the peninsula. Sending ships to the west as well is a clear show of resolve ahead of U.S. President Donald Trump's tour of Asia next month, which will start with his scheduled arrival in Japan on Nov. 5.

North Korea has blasted the joint drills as a "rehearsal for war."

"North Korea's nuclear test site and missile launching sites are based on the east side of the country, which is why the U.S. and South Korea have focused their training there so far," explained Tetsuo Kotani, chief researcher at the Japan Institute of International Affairs, a think tank. "The west is home to more than 100,000 heavy guns aimed at the South Korean capital, Seoul. Sending ships to the west side is a signal that the U.S. is ready to take out those weapons in a contingency."