JAKARTA/DUBAI -- The United Arab Emirates last week marked two events that reflect its new international pivot -- a historic visit by senior officials to Israel, and the renaming of a prominent street in Abu Dhabi after Indonesian President Joko Widodo.

On Tuesday, Israeli Prime Minister Benjamin Netanyahu welcomed Emirati economy and finance ministers, among others, who were part of the first Gulf Arab delegation ever to visit Tel Aviv. The two countries signed four agreements -- one on visa exemption, making the UAE the first Arab nation to lift visa restrictions on Israeli nationals, as well as on aviation, investment, science and innovation.

The visit came just a day after an inauguration ceremony to rename a major street near the Abu Dhabi National Exhibition Center -- the largest exhibition venue in the Middle East -- as "President Joko Widodo St." The renaming was at the behest of Abu Dhabi Crown Prince Mohammed bin Zayed, the de facto leader of the UAE.

"Mohammed bin Zayed has given directions to build and name a mosque in the diplomatic area and rename Al Ma'arid Street after Indonesia's President Joko Widodo, in recognition of the president's close friendship with the UAE and his role in strengthening the bilateral relationship," the Abu Dhabi government media office said on Oct. 20.

Bin Zayed, dubbed the most powerful man in the Middle East, is also seen behind the deal to normalize UAE-Israel relations, which was signed at the White House last month. Bahrain is another signatory of the document called the Abraham Accords that make the countries the third and fourth Arab nations to establish full ties with Israel, after Egypt in 1979 and Jordan in 1994.

The curious timing prompted some politicians in Jakarta to immediately connect the two separate events.

Sukamta, a lawmaker from the Prosperous Justice Party, a conservative Islamic party, speculated that the street renaming might have even been suggested by Israel to get the leaders of Indonesia, the world's most populous Muslim-majority country, on the side of the deal.

"The motives could range from trying persuade Indonesia not to protest [the normalization pact] or even to persuade the Indonesian president to join in," Sukamta told Nikkei Asia. "Such a persuasion would be childish on the UAE's part."

Jakarta so far has not spoken directly against the UAE-Israeli deal, unlike Turkey, which is considering suspending diplomatic ties with the Arab nation.

"The normalization of UAE-Israeli and Bahrain-Israeli relations will not change Indonesia's stance on Palestine," Indonesian foreign ministry spokesperson Teuku Faizasyah said last month. "To Indonesia, the settlement of the Palestine issue requires a respect to the relevant U.N. Security Council resolution ... including on the two-state solution. We must ensure that all initiatives for peace will not fail [that]."

Abdulla Ahmed Al Saleh, the UAE's undersecretary of the ministry of economy, has stressed the strategic importance of the economic ties between the UAE and Indonesia, indicating that they would continue to evolve at a rapid pace.

"For over 40 years of shared values and solidarity, the bilateral relations between the United Arab Emirates and the Republic of Indonesia have witnessed a remarkable stature, notably by virtue of the exchange of official visits between the two countries," Al Saleh told Nikkei Asia. 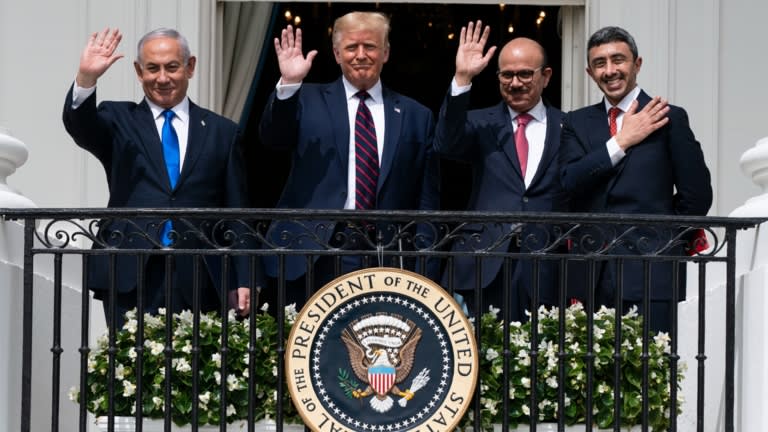 Some observers see the UAE and Bahrain's deals with Israel as a move to counter Iran's aggressiveness in the region.

Indonesia, meanwhile, is not just a staunch supporter of Palestine, but also has been on fairly good terms with Iran.

Despite rising sentiment against Shiites in the archipelago nation in recent years, most Indonesians -- predominantly Sunnis -- "know very little about Shi'ism and therefore harbor no wariness about Iran," O'Rourke said.

"Indonesia, as the world's largest Muslim country, the largest ASEAN country and a respected democracy, can wield considerable 'soft power' in international relations," O'Rourke added. "Therefore... the UAE's outreach to Israel requires corresponding efforts to retain the goodwill of Indonesia."

On the economic front, partnership talks also have intensified between Indonesia and the UAE in the past year -- something that observers said was necessary for Abu Dhabi to appease Jakarta, which would also need to welcome the gesture.

Yon Machmudi, head of a postgraduate program in Middle Eastern and Islamic studies at the University of Indonesia, said in the same way as Saudi Arabia, the UAE under bin Zayed has been trying to develop its economy beyond its dependence on oil.

"They're also trying to find new markets. And Indonesia is a potential big market for them in broad economic sectors," Machmudi said. "And while Indonesia's [economic] talks with Saudi Arabia have not shown happy signs [of advance], the deals with the UAE seem more promising given the speed."

Indonesia and the UAE signed $22.89 billion worth of investment and business deals, spanning sectors such as energy, petrochemicals, port developments and telecommunications, during Widodo's visit to Abu Dhabi in January. The same month, Jakarta named bin Zayed, as well as SoftBank CEO Masayoshi Son and former British Prime Minister Tony Blair as advisers for Indonesia's $33 billion new capital city project, which is now on hold due to the coronavirus pandemic. Palestinian demonstrators carry the Algerian flag as they step on portraits of U.S. President Donald Trump and Israeli Prime Minister Benjamin Netanyahu during a protest on the Gaza Strip on September 23, to denounce the Israeli normalisation deals with the United Arab Emirates and Bahrain.

In July, the UAE became the first country with which Indonesia created a travel corridor for essential business trips during the pandemic. And Indonesia has entered into a three-way agreement with the UAE's G42 Healthcare and Chinese state-owned pharmaceutical company Sinopharm for the procurement of a coronavirus vaccine produced by the latter.

"We have discussions with ADIA ... [which is] helping us as our discussion partner to set up this sovereign wealth fund," Septian Hario Seto, deputy coordinating minister for maritime affairs and investment, said on Friday. "We are having discussion with them as well on potential investment."

Other discussion partners for the fund include the U.S. International Finance Corp. and Singapore's GIC, he added.

The changing dynamics will likely benefit Indonesia, the UAE, Bahrain and Israel, but not Palestine.

"The two-state solution will become unpopular, taken over by the United States and Israel with the Abraham Accords project that is trying to normalize while abandoning solutions through organizations such as the United Nations," Machmudi said. "Palestine's independence will become farther from reality."