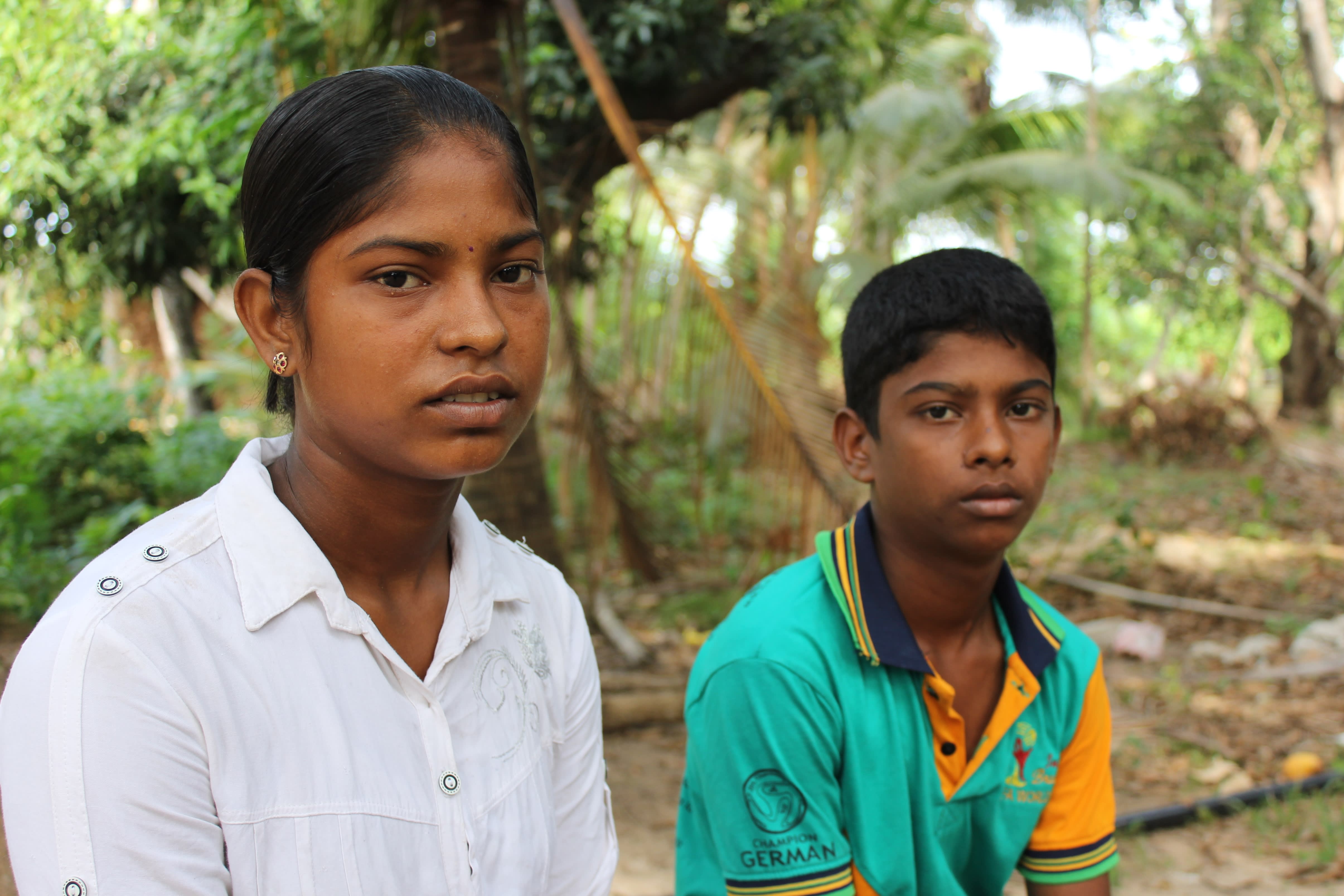 MULLIVAIKAL, Sri Lanka -- Across a flat, barren strip of land in Mullivaikal, on Sri Lanka's northeastern coast, a cluster of newly painted two-roomed concrete houses glows brightly under a scorching afternoon sun. But this evidence of renewal cannot whitewash the grim history of this 2 sq km sandy spit, the site of the final battle in the island state's 26-year civil war.

From the doorway of her new house, Nahulan Tharsana has a clear view of homes destroyed in the fighting. Many are still pockmarked with bullet holes; some have lost their roofs in explosions. But it was far worse in mid-April 2009, when more than 100,000 civilians were packed into this village by the separatist Tamil Tigers as they fought approaching Sri Lankan government troops. "Shells came from three sides; there were explosions everywhere," said 30-year-old Tharsana. "People were trying to stay alive by hiding from the bombs; 10 families in our compound."

For many Tamil civilians such evasive measures proved futile. Mallarajan Rajiba and her younger brother Kanagan -- then aged only 10 and seven -- were hiding with a relative in a bunker on the night of May 15 as shells rained down. They survived, but their parents and four brothers, huddled in a nearby bunker, were killed. "The shell exploded just where we all had dinner that night," said Rajiba, tugging at the left sleeve of her white shirt as she recounted the moment her family was killed.

After a long investigation, a broad account of what happened in the final weeks of the civil war has now been published by the Office of the United Nations High Commissioner for Human Rights, Zeid Ra'ad Al Hussein. The report, released on Sept. 16, paints a disturbing picture of the bloody showdown in Mullivaikal, which the Sri Lankan government had designated a "No Fire Zone."

"Multiple witnesses described scenes of devastation, with hundreds of bodies of people killed by shelling scattered across areas within the NFZ," the report says. "Entire families had been killed as bombs landed in bunkers they were sheltering in."

Mullivaikal was the third NFZ designated by the government of President Mahinda Rajapaksa as five divisions closed in on the Tigers, formally known as the Liberation Tigers of Tamil Eelam. The Tigers were notorious for suicide attacks on both civilian and military targets as they pursued their objective of an independent Tamil state. They ended the war surrounded by civilians, corralled at gunpoint, firing on the advancing soldiers from fortifications near civilian institutions, including hospitals. Their actions "contributed to civilian casualties by drawing fire," the 262-page report says.

The battle at Mullivaikal was the last act in the final phase of fighting, from January to May 2009, during which the Tigers forced some 300,000 civilians in northern Sri Lanka to retreat with them. The fates of thousands remain unknown. A U.N. panel of experts estimated in a 2011 report that the death toll may have been as high as 40,000 during those four months -- nearly half of the 100,000 deaths caused by the conflict.

The estimate was dismissed by the Rajapaksa regime, which said the military had pursued a "zero civilian casualty" policy. Other regime hardliners called the military's actions a "humanitarian operation" to rescue the trapped civilians.

That argument has now run its course. The U.N. report suggests that "serious violations of international humanitarian law," tantamount to "war crimes," were committed by both sides. The Sri Lankan security forces are accused of widespread torture, sexual violence, and extrajudicial killings, including the execution of prisoners during and after the war. The Tigers are charged with indiscriminate suicide bombings and mine attacks, assassinations of civilians, and abuse of Tamil children, many of whom were forcibly conscripted to swell their ranks.

Some of these child Tigers were among hundreds of fighters who reportedly surrendered to the military soon after the war ended but have "disappeared," human rights groups say. The number of such "disappearances" since early 1990 has reached 16,000, according to a Sri Lankan presidential commission. Kaladevi Ramjayam holds a photo of her daughter, Mehala, whom she has been searching for since the war ended in May 2009.   © Marwaan Macan-Markar

Many parents are still searching for news of their children. Kaladevi Ramjayam said her daughter, Mehala, 15, was taken by the Tigers near a village close to Mullivaikal just weeks before the war ended. "I was beaten by them when they came in a jeep and took her," said Ramjayam, her eyes moistened with tears.

A subsequent sighting of her daughter in military custody at an army checkpoint at the end of the war raised her hopes, but six years later she still has no firm news of her daughter's fate. The military has dismissed her queries, together with those of other families searching for their kin.

Hopes of greater openness from the government have been slightly raised by the results of two elections this year. In January, the authoritarian Rajapaksa suffered a shock defeat at a presidential poll. In August, the electorate's verdict was consolidated in a parliamentary election, depriving Rajapaksa's party of sufficient seats to allow him to attain his objective of becoming prime minister.

Maithripala Sirisena, his successor as president, and Ranil Wickremesinghe, the new prime minister, have sounded more conciliatory than Rajapaksa toward calls for justice for civilian victims of the war. Mangala Samaraweera, the foreign minister, said just before the release of the U.N. report that the government "acknowledges the suffering of victims across Sri Lanka's communities" and is aware of past mistakes and the "weakness of our institutions."

However, a political challenge looms for the new administration. International human rights groups are calling for an international tribunal on the war, with foreign jurists ensuring its independence from official pressure. Zeid has also called for foreign jurists, but thinks they should sit alongside Sri Lankan judges in a "hybrid" court of inquiry.

Both ideas are opposed by the government, which argues that a wholly domestic tribunal would suffice. Even for that to take place, however, Sri Lanka would need to introduce enabling legislation that "retroactively prosecutes perpetrators of war crimes," said Ruki Fernando of the Human Rights Documentation Center, a local campaigning organization. Pushing through such a law would test the level of support for the government in the majority Sinhalese community, in which Rajapaksa retains a deep following.

Skepticism about a domestic remedy also runs high among lawyers who act for victims from the Tamil minority. Civil society activists in Jaffna, the Tamil heartland in the north, have launched a signature campaign calling for an international tribunal. The campaign is partly fuelled by a record of political interference with the judiciary during the Rajapaksa years.

"Even a hybrid system with local and international jurists will not do," said Kanagasabai Ratnavale, a lawyer who has appeared for Tamil victims of the war. "We have no faith in the police, judges and the attorney general to be impartial in prosecuting soldiers who fought for the state."

The likely outcome will be clearer in late September, when the 47 member countries of the Human Rights Council, an intergovernmental body within the U.N. system, are expected to vote on a resolution on Sri Lanka. The wording of that resolution is not yet known, but the Sirisena administration is pushing for a text that that would call for a domestic tribunal. It is not alone: the United States has abandoned its former support for an international inquiry -- volubly expressed during the Rajapaksa administration -- and is now campaigning alongside Colombo for a domestic tribunal.

"We fundamentally support efforts to create a credible domestic process for accountability and reconciliation," Nisha Biswal, the assistant secretary of state for South and Central Asia, said in Colombo after the August elections.

Washington's shift of policy was foreshadowed in January, when Sirisena's moderate pro-Western administration succeeded the ultra-nationalist, pro-Chinese Rajapaksa regime. But Sri Lanka's change of political orientation offers little comfort to those who witnessed the siege of Mullivaikal. They want neutral ears to share their loss.