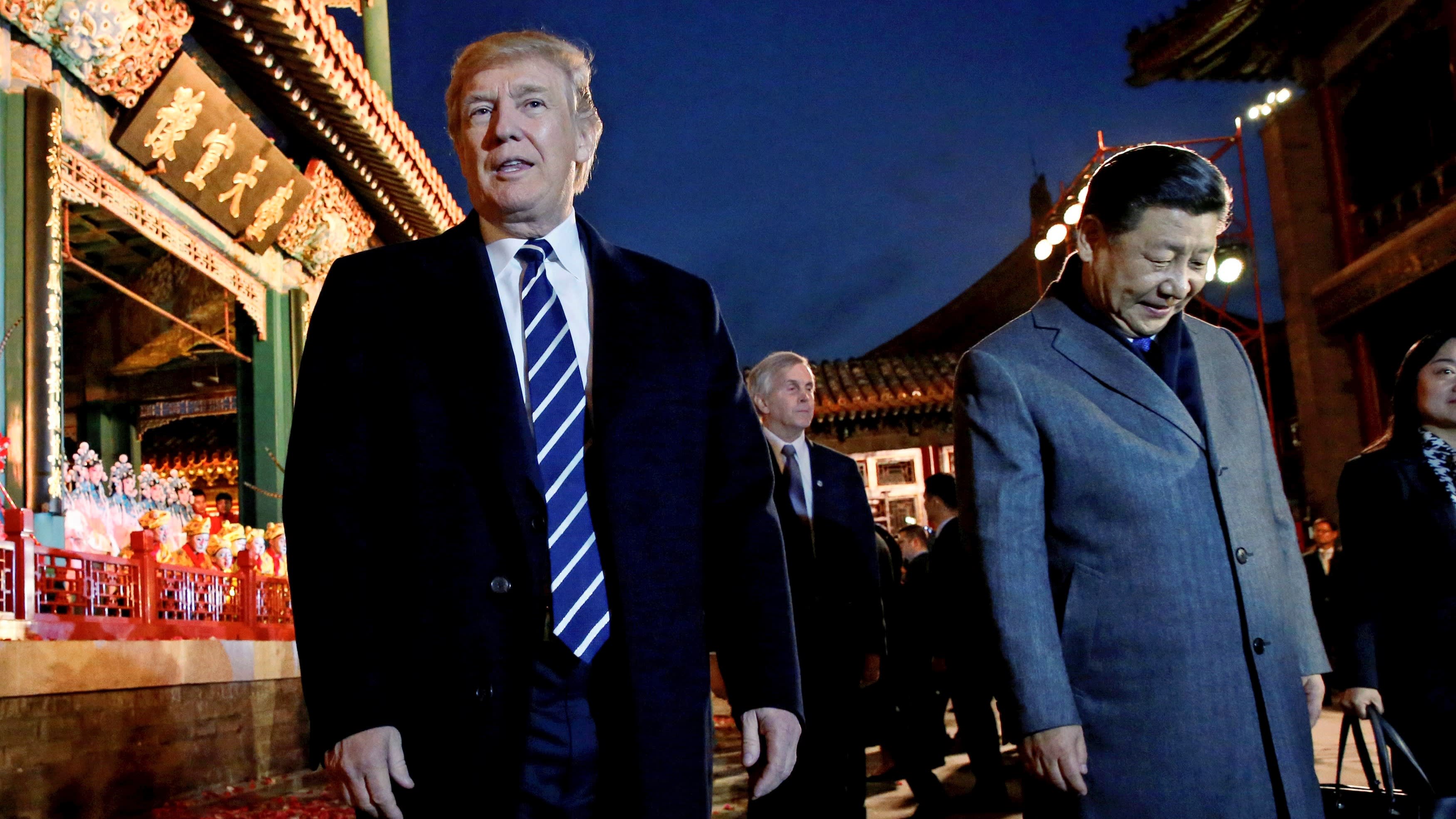 US, China stack up bargaining chips for Trump-Xi summit

BEIJING -- The U.S. and China have gathered diplomatic ammunition for meetings here Thursday between Presidents Donald Trump and Xi Jinping, with the American leader expected to press hard over the countries' trade imbalance and Pyongyang's nuclear threat.

In days leading up to the meeting, Washington has taken measures including sanctioning a Chinese bank for doing business with North Korea and raising tariffs on China-made aluminum foil. Beijing has fended off criticism of its approach to Pyongyang through official statements and shown commitment to shrinking its trade surplus by announcing an international import exhibition for next year.

Trump, on a tour of Asia, is here Wednesday through Friday on his first state visit to China. The stop follows meetings with Japanese Prime Minister Shinzo Abe and South Korean President Moon Jae-in on their home turf. Trade and North Korea have dominated discussions, a pattern that looks set to continue.

Washington on the offensive

On Nov. 2, the U.S. Treasury Department locked China's Bank of Dandong out of its financial system, leaving the institution hard-pressed to carry out dollar transactions. The bank, headquartered close to the North Korean border, was deemed to have helped launder money connected to the reclusive state's missile development. The U.S. had warned of the action at the end of June, but waited until the eve of Trump's departure to follow through.

The U.S. Justice Department in September 2016 declared they had seized assets from 25 bank accounts belonging to Chinese businesses seen as involved with the money laundering scheme. Just four of those accounts were with Bank of Dandong, with the rest tied to state lenders like China Construction Bank and Industrial and Commercial Bank of China. This month's crackdown seemed to suggest the major players would be next.

Washington has also been turning up the heat on trade. China's trade surplus with the U.S. for January-October grew 7% on the year to a record $223 billion.

At a Monday press conference in Tokyo, Trump claimed America had been in a "very unfair trade situation" with China for some time. In late October, the U.S. also slapped high anti-dumping tariffs on Chinese aluminum foil, having repeatedly called on the country to cut back on what was deemed excessive output of the material.

China has some flexible responses in its quiver, and some firm. On the North Korean issue, it tends toward the latter. When Trump and Abe agreed this week that China should play a larger role in resolving the North Korean problem, a spokesperson for China's foreign ministry swiftly countered that "for many years, the Chinese side has made relentless efforts to facilitate the peaceful settlement of the Korean Peninsula nuclear issue through political and diplomatic means."

Chinese leaders are "likely cautious about imposing additional sanctions such as cutting off exports of crude oil" to North Korea, said a Chinese expert.

China also mounted a defense on the trade issue with its Nov. 2 announcement that Shanghai, the country's economic heart, would in November 2018 host a trade fair for countries to show off goods they want to export to China.

Also on Nov. 2, China's vice minister of commerce, Fu Ziying, expressed confidence in a press conference that Trump's visit would bring successes on the economic and trade fronts. Some expect major business deals to be struck in energy-related fields.

How do you feel about Trump visiting the region? Share your thoughts