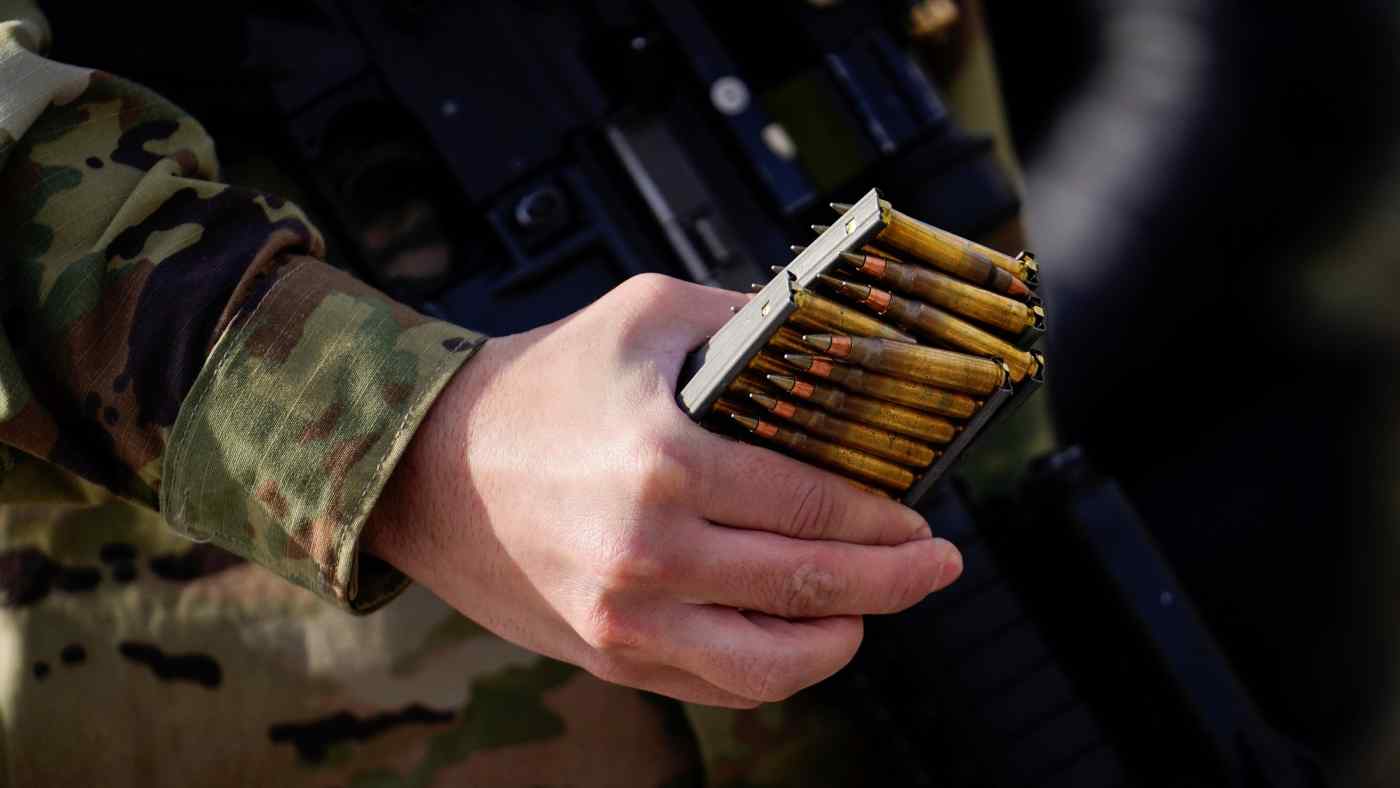 WASHINGTON -- An unprecedented security presence leaves the U.S. capital isolated and paralyzed ahead of Wednesday's inauguration of Joe Biden as president, even as the Senate holds confirmation hearings Tuesday for five of his cabinet nominees.

The Pentagon confirmed that 12 members of the National Guard had been removed from duty, including two for "inappropriate comments or texts" they had made, following vetting and "an abundance of caution" ahead of Democrat Biden's inauguration on Wednesday, according to General Dan Hokanson, the chief of the National Guard Bureau.

Two U.S. officials told the Associated Press that all 12 were found to have ties with right-wing militia groups or posted extremist views online.

No plot against Biden was found.

The National Mall, normally thronged by thousands on any given day -- and hundreds of thousands during a presidential inauguration -- has been closed off, with 200,000 flags set up to represent those Americans who will be unable to visit the capital for Wednesday's historic event.

Pedestrians and drivers are being checked at random for identification. Most restaurants and bars are closed around the White House, and several Metro transit stations are blocked off. The National Mall is filled with a display of U.S. flags during a dress rehearsal for U.S. President-elect Joe Biden's Presidential Inauguration at the U.S. Capitol in Washington on Jan. 18.   © Reuters

According to the U.S. Secret Service, the inauguration was designated a "National Special Security Event" -- a potential target for terrorism or other criminal activity -- from a week prior to the ceremony.

With the Secret Service as the lead agency, local law enforcement, the National Guard, the Federal Bureau of Investigation, Federal Emergency Management Agency, Transportation Security Administration and the Department of Homeland Security are among the agencies involved.

During a briefing last week, FBI Director Christopher Wray discussed the agency's efforts regarding inauguration security in the wake of the Jan. 6 assault on the Capitol building.

"We are seeing an extensive amount of concerning online chatter -- that's the best way I would describe it -- about a number of events surrounding the inauguration," he said. "Right now, we're tracking calls for potential armed protests and activity leading up to the inauguration. Our posture is aggressive; it's going to stay that way through the inauguration."

The Capitol Police, whose chief resigned after the Jan. 6 riot, has been making arrests. These include a man accused of carrying an unlicensed handgun with ammunition and a woman alleged to have impersonated a law enforcement official.

Drivers and pedestrians face a strict list of items they are prohibited from having on their person including weapons, toy guns, selfie sticks and even bicycles and balloons. The Capitol complex is closed to the public, and the Capitol grounds will not be accessible to the public on the day of the inauguration.

"Anyone attempting to unlawfully gain access to the Capitol Grounds by climbing a fence or any other unlawful means will be subject to an appropriate use of force and arrest," the Capitol Police said.

Yet the most remarkable presence on the ground has been of the U.S. military's National Guard, which is patrolling the streets in tactical gear, armed with automatic weapons and deployed in armored vehicles.

A statement from the guard notes that "25,000 National Guard men and women were on the ground in Washington, authorized to conduct security, communication and logistical missions in support of federal and D.C. authorities through the Jan. 20 inauguration."

But the guard has made no official statement regarding reports, including one by The Washington Post, of the FBI warning law enforcement agencies privately that far-right extremists have discussed posing as National Guard members in Washington while others have reviewed maps of the city -- indications of an attempt to disrupt Wednesday's inauguration.

According to the Post, the threats identified by the FBI suggest that followers of the American right-wing QAnon ideology as well as "lone wolves" -- some of whom participated in the Capitol riot -- plan to come to Washington for the inauguration. 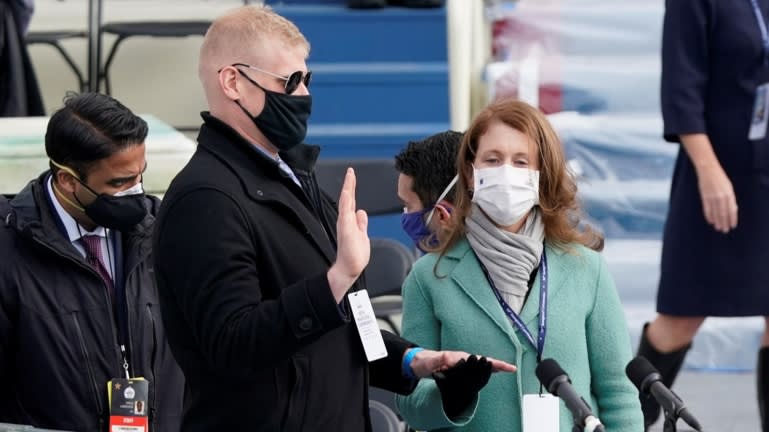 A stand-in for U.S. President-elect Joe Biden is sworn in on the podium, as a stand-in for Jill Biden looks on during a dress rehearsal for Presidential Inauguration at the U.S. Capitol in Washington on Jan. 18.   © Reuters

The report also cited the FBI observing downloads and sharing of maps covering sensitive areas in Washington and discussing how those areas could be used to interfere with security during the inauguration.

Yet the American transition of power continues. Hearings for major cabinet positions typically conclude by mid-January, letting new presidents hit the ground running with many top posts filled on their first day.

But the process this time has been bogged down by deep political divisions in Congress, exacerbated by outgoing President Donald Trump's claims of election fraud, along with runoff elections in Georgia to determine control of a narrowly divided Senate.

Though the Senate held confirmation hearings Tuesday on cabinet nominees -- including Janet Yellen for treasury secretary, Antony Blinken for secretary of state and Lloyd Austin for defense secretary -- speculation persists that Biden may become the first president in three decades to enter office with no cabinet members approved at the start of his term.

Transportation Secretary Elaine Chao and Education Secretary Betsy DeVos announced their resignations after the Jan. 6 invasion of the Capitol. That brought the number of departures by Senate-confirmed cabinet members over the past four years to 14, the highest total in data going back four decades, according to the Brookings Institution.

National security adviser Robert O'Brien, a key White House player in diplomatic and security policy, reportedly considered stepping down as well. But he was persuaded to stay on by colleagues who expressed concern about the potential security impact of such a move, according to U.S. media.

The strange nature of this transition is reflected in policy moves as well. The Trump administration said Monday that a ban on travelers from European countries and Brazil, aimed at curbing the spread of the coronavirus, would be lifted Jan. 26. The change would take effect the same day as a new rule requiring all travelers entering the country by air to provide proof of a negative coronavirus test.

The incoming Biden administration quickly signaled that it plans to block the changes and extend the ban.

"With the pandemic worsening, and more contagious variants emerging around the world, this is not the time to be lifting restrictions on international travel," incoming White House press secretary Jennifer Psaki tweeted.

Outgoing administrations usually refrain from making such major policy changes during a transition period without consulting with the incoming team.

Trump's upcoming impeachment trial in the Senate risks becoming a thorn in Biden's side as well. The chamber is required to make the proceedings a priority, but the incoming president wants lawmakers to handle other urgent tasks at the same time, including approving top appointments and debating coronavirus response and economic relief measures.

If the process leads to Biden -- who won the election while calling for reconciliation and unity -- being seen as putting political interests first from the outset, his administration could face an even tougher road ahead.