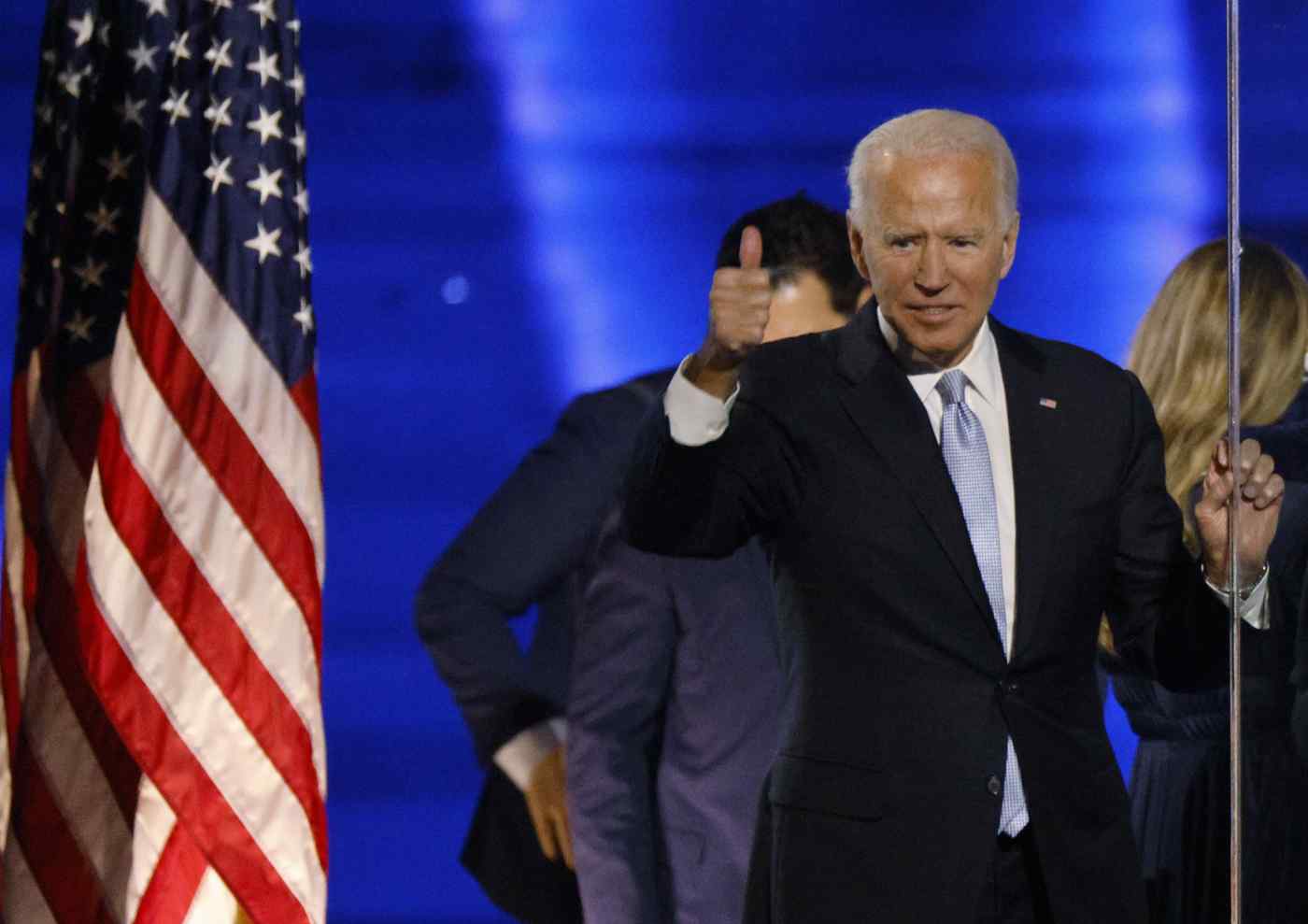 "Tonight, the whole world is watching America, and I believe at our best, America is a beacon for the globe," Biden said in a victory speech Saturday night in Wilmington, Delaware, before a mask-wearing crowd watching from their cars and trucks, honking in support and waving American flags.

"We will lead not only by the example of our power, but by the power of our example," said the Democratic president-elect, who vowed to "make America respected around the world again."

Biden, who turns 78 on Nov. 20, will be the oldest president to enter the White House. His running mate, Kamala Harris, will be the first woman, as well as the first Black and Asian American, to be vice president.

"You ushered in a new day for America," Harris said shortly before she introduced Biden, applauding American voters for choosing "hope and unity, decency, science, and yes, truth."

A narrow victory in the key battleground of Pennsylvania pushed the former vice president across the finish line earlier Saturday, following days of vote counting and a bitter campaign set against a backdrop of protests over racial injustice and the raging coronavirus pandemic. Trump, who eschewed precautions like face masks and forged ahead with campaign rallies, was himself infected just weeks before election day.

Refusing to concede, Trump issued a statement through his campaign page after the media projected his opponent as the winner, saying, "The simple fact is this election is far from over."

"Beginning Monday, our campaign will start prosecuting our case in court to ensure election laws are fully upheld and the rightful winner is seated," he said.

Trump also tweeted on Saturday, "I WON THIS ELECTION, BY A LOT!"

Even before Biden hit the magic number of 270, the Trump team was already demanding a recount in Wisconsin and had filed lawsuits over the counting process in multiple states. The incumbent's refusal to bow out could portend a tense showdown in the courts -- and potentially between protesters and police in the streets -- but the Biden campaign is moving forward with its transition plans.

In Asia, analysts said a Biden victory would mark a return to a more predictable relationship with the U.S., though Trump's term would likely leave an indelible mark -- particularly when it comes to China.

"I think there will be some return to normalcy -- a less blatantly disrespectful attitude to the allies, and less open hostility to rivals," said Koichi Nakano, a professor at Japan's Sophia University. "But, significantly, not a full return to the status quo ante. Trump has opened Pandora's box, and everyone knows now that the U.S. is not the seemingly stable, reliable mainstay of the region."

Biden, Nakano said, will not be able to simply undo Trump's "isolationism and unilateralism," and nor will he want to appear "soft" on China.

Although Biden secured the numbers, the election was not an outright repudiation of Trumpism. Despite the president's controversial handling of COVID-19, which has killed over 235,000 Americans and severely damaged the U.S. economy, the race was far closer than national polls had suggested. Biden received a record number of 74.5 million popular votes as of Saturday noon, versus Trump's 70.3 million, according to The New York Times' tally. The nationwide turnout was estimated at 160 million, or 67% of all eligible voters -- the highest in 120 years. A supporter of incumbent President Donald Trump, left, argues with a man holding a Democratic Party banner during a "Stop the Steal" protest against late counting in Las Vegas on Nov. 5.   © Reuters

In several key battlegrounds, initial results showed Trump ahead, only for those leads to evaporate as more of the estimated 65 million mail-in ballots were counted. Ultimately, Trump failed to hold the Midwestern states that handed him victory over Hillary Clinton in 2016 -- Michigan and Wisconsin.

On the campaign trail, Biden vowed to restore the U.S. global leadership that Trump shunned under his "America First" nationalism. Nowhere was the impact felt more acutely than in Asia.

Early in his term, Trump withdrew from the Trans-Pacific Partnership trade deal that had been championed by the Barack Obama administration as a counterweight to rising Chinese economic power. The former reality TV star went on to slap tariffs on a wide range of goods made in China, igniting a trade war that has widened into a campaign against Chinese tech companies such as Huawei, TikTok and the partially state-owned Semiconductor Manufacturing International Corp. (SMIC).

"Biden would bring welcome predictability back to U.S. foreign policy in Asia, something our allies and partners will welcome, and even China," observed Ankit Panda, senior fellow at the Carnegie Endowment for International Peace in Washington. "There'll be a return to multilateralism and a focus on buttressing fraying alliances."

Regarding China specifically, Panda said we can still expect a "hard line" because "Democrats have updated their views on China in the last four years." He thinks there might be "an easing of the tariffs, but a continuation of nontariff measures and a particular focus on supply chain integrity and intellectual property."

Most election watchers Nikkei Asia spoke with agreed Biden will not go easy on Beijing.

"It's unlikely that Biden would reverse some of Trump's hostile policies toward China," said Willy Lam, an adjunct professor at the Chinese University of Hong Kong, though he thinks Biden will be more inclined to engage with China on issues like trade and climate change.

Likewise on the tech front, Wayne Shiong, a partner at the venture capital firm China Growth Capital, sees little chance of the U.S. becoming more hospitable to Chinese companies. "The U.S. sanction against Huawei is a bipartisan consensus," he said.

Jonathan Choi, chairman of the Chinese General Chamber of Commerce Hong Kong -- the largest pro-Beijing business organization in the territory -- expressed similar sentiments. He told Nikkei Asia that while Trump "may be more serious" about containing Beijing and Biden might be more "gentle," American policy on this front "is quite clear, no matter who the president is."

An exception was Oh Ei Sun, senior fellow at the Singapore Institute of International Affairs, who sounded much more optimistic about a U.S.-China thaw. He predicted that the "trade war is likely to end soon," and that Asia-Pacific countries will "no longer have to choose" between the superpowers. "Biden will almost certainly be much more friendly to China than Trump, especially when it comes to economic matters," Oh said.

On other pressing Asian security issues -- from Taiwan to the Korean Peninsula -- analysts anticipate subtle changes that would bring U.S. policy more in line with past norms.

"I can't imagine a President Biden being bad for Taiwan," said Sean King, a scholar with the University of Notre Dame Liu Institute for Asia & Asian Affairs. He noted Biden's track record of supporting the self-ruled democratic island claimed by China, including arms sales, and that Biden himself tweeted Taiwan President Tsai Ing-wen his congratulations upon her January 2020 reelection.

"But," King added, "I also can't imagine Biden being as strong on Taiwan as President Trump has been, as the Trump administration has, for example, lobbied other governments not to recognize Beijing in favor of Taipei, treated President Tsai as an effective head of state on her U.S. visits and sold Taiwan more weapons than ever thought attainable."

Under Biden, he said, "we might see U.S.-Taiwan relations go from great to good. But still good."

Overall, King predicted a less transactional approach to dealing with allies. "Specifically, this means not harassing Seoul and Tokyo over defense burden-sharing costs and/or trade, and not even entertaining the idea of withdrawing any U.S. troops from South Korea."

Offering a perspective from South Korea, Citi Research economist Marie Kim agreed that a Biden administration would focus more on allies rather than "personal relationships with country leaders" -- like Trump's courtship of North Korean leader Kim Jong Un. On the Korean Peninsula, she said, "we expect no easy way out," but said it would be nice to see "concrete progress on denuclearization."

Back home, Biden will face a slew of challenges, starting with a resurgent virus that is infecting over 100,000 Americans daily. The U.S. also awaits at least one more round of broad economic stimulus -- on which Congress has dragged its feet -- while the ratio of federal debt to gross domestic product has ballooned to levels last seen in the 1940s. The massive Black Lives Matter protests this summer and the counterprotests that ensued, sometimes taking a violent turn, have also brought the nation's political divide into sharp relief.

For this reason, Aleksius Jemadu, international politics professor at Indonesia's Pelita Harapan University, is not expecting much from Biden in the short term. "I think to us, the U.S. credibility as the leader of the democratic world is now being questioned ... because its own democracy is problematic."

Looming over it all is the Trump campaign's fight to overturn the results. The incumbent has threatened to take the battle all the way to the Supreme Court, which now has a six-to-three conservative majority. His newest appointee, Amy Coney Barrett, was just pushed through at the end of October.

Still, "there is no obvious path in the abstract" for a challenge to go to the Supreme Court, said Rebecca Green, co-director of the Election Law Program at William & Mary Law School. "The Supreme Court doesn't have jurisdiction to hear cases of regular recount or contests of state election results," she explained. "There would have to be a federal question implicated."

States with contested results will have until Dec. 8 -- or the "safe harbor" deadline -- to resolve disputes, or the state legislature can step in to appoint electors. Electors will formally cast their votes on Dec. 14.