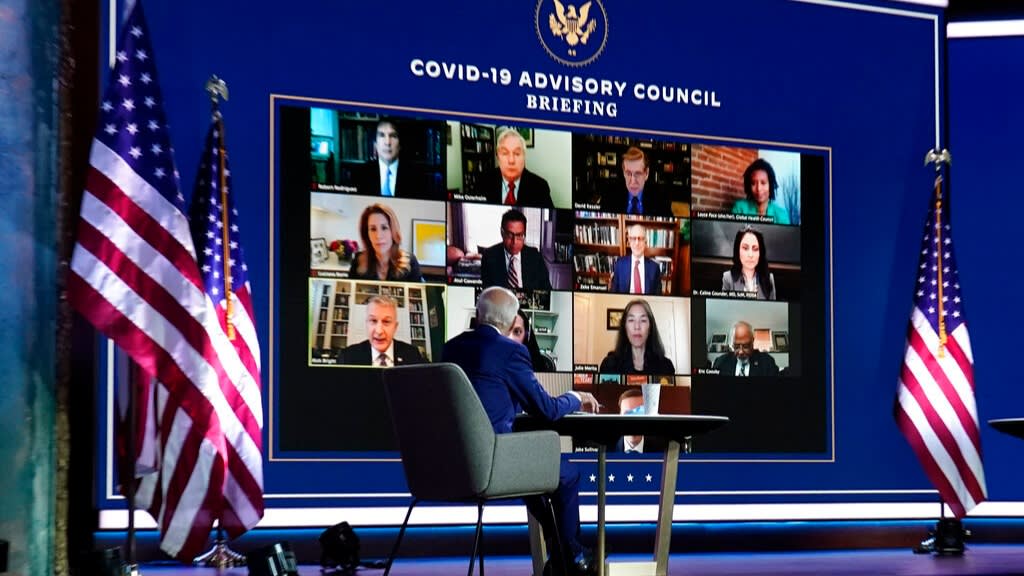 NEW YORK -- U.S. President-elect Joe Biden on Monday urged Americans to wear a mask after the first meeting of his coronavirus task force, even as the nation rejoiced in the news of progress on vaccine development.

"We're still facing a very dark winter," the former vice president said in a livestreamed briefing, warning that administering vaccines can take time and that mask-wearing remains essential for the foreseeable future.

"I won't be president until Jan. 20, but my message today is to everyone is this: It doesn't matter who you voted for. ... We can save tens of thousands of lives if everyone would just wear a mask for the next few months," Biden said in his address, imploring the nation to put politics aside in the face of the pandemic. "Not Democrat or Republican lives, American lives."

His remarks came hours after Pfizer and German partner BioNTech said that their COVID-19 vaccine candidate was found to be more than 90% effective in its Phase 3 clinical trial, and that they plan to seek emergency-use authorization from the U.S. Food and Drug Administration as early as this month. The nation also passed the grim milestone of 10 million cumulative confirmed infections.

The vaccine study, which involved over 43,000 participants, is still pending a final analysis of safety and additional efficacy data, expected to conclude in the third week of November, the company said.

"With today's news, we are a significant step closer to providing people around the world with a much-needed breakthrough to help bring an end to this global health crisis," Pfizer Chairman and CEO Albert Bourla said in a news release.

But in his address, Biden warned that "it's clear that this vaccine, even if approved, will not be widely available for many months yet to come."

The Democratic former vice president had spent Monday morning meeting with his transition team's COVID-19 advisory board, which was unveiled earlier that day and consists of 13 public health experts.

"Dealing with the coronavirus pandemic is one of the most important battles our administration will face, and I will be informed by science and by experts," Biden said in a statement accompanying the announcement of the team, committing to providing vaccination and treatment free of charge to Americans.

The president-elect listed expanding rapid testing and contact tracing, allocating resources to help schools and businesses reopen safely, and protecting vulnerable populations as efforts he would prioritize once sworn in and hope can be done between now and then. He also vowed to restore U.S. leadership in fighting the pandemic.

Biden, who moved quickly to start transition efforts after his election victory Saturday, revealed in a separate statement Monday that his team were informed of Pfizer's positive trial results Sunday night ahead of its public announcement.

The vaccine update, combined with election results projected over the weekend placing Biden on track to become the next U.S. president, sent the Dow Jones Industrial Average surging over 834 points on Monday.

President Donald Trump, who is yet to concede and has launched a number of legal battles in hopes of contesting the election outcome, also tweeted about the vaccine progress Monday.

The Trump administration's Operation Warp Speed vaccine program has pledged $1.95 billion to support manufacturing and distribution of 100 million doses once Pfizer has an approved vaccine.

But Pfizer's development efforts were not part of the program, unlike those of such other players as Johnson & Johnson, AstraZeneca and GlaxoSmithKline.

Some of Trump's allies, including his eldest son, Donald Jr., and Republican Sen. Ted Cruz, expressed skepticism over the timing of Pfizer's announcement.

But the drug company's CEO maintained that it had nothing to do with politics.

"We announced it the moment we learned about it," Bourla said on CNN. "And I said multiple times that the election for us is an artificial timeline."

News on the vaccine -- which could be approved in the coming weeks -- and the issue of its distribution have further intensified the tension between the incumbent administration and the next as well as their allies.

Andrew Cuomo, the Democratic governor of New York state, warned Monday that if the Trump administration distributes the vaccine through large private providers, key vulnerable groups will be left out, much as they lacked access to treatment as infections spread.

"We can't let this vaccination plan go forward the way the Trump administration is designing it, because Biden can't undo it," Cuomo said on ABC.

He also said he has been talking to other governors on how to "shape the Trump administration's vaccine plan" or even "stop it" before it "does damage," drawing the ire of Trump's fellow Republicans, who criticized the statement as partisan.