Biden speeds efforts to bring US back into global fold WASHINGTON -- U.S. President-elect Joe Biden has hit the ground running in his push to mend ties with key allies and embrace international frameworks snubbed by the current administration.

The U.S. has veered sharply toward isolationism under President Donald Trump, abandoning such agreements as the Paris climate accord. Biden is placing a greater focus on international cooperation.

Biden has repeatedly pledged to rejoin the Paris Agreement on his first day in office, which would be Jan. 20. He is also preparing to rejoin the Iran nuclear deal and halt the American withdrawal from the World Health Organization, now scheduled for July 2021.

Biden has also said he will speak with international leaders from day one to rebuild relations between the U.S. and its allies. Trump had threatened and moved to impose tariffs affecting traditional partners, like South Korea and such NATO members as Germany and France. 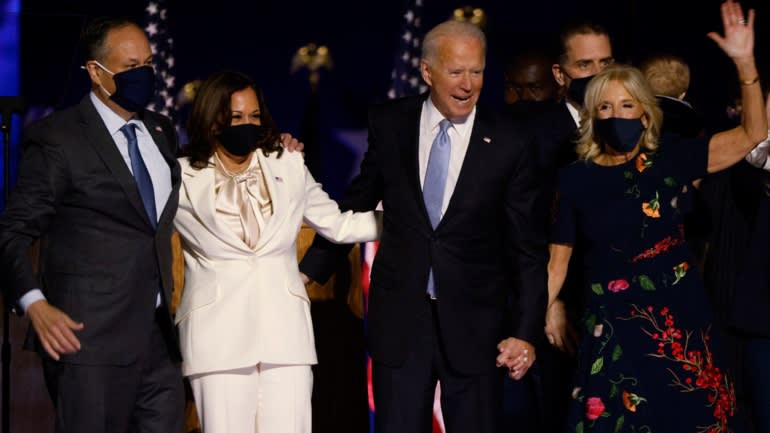 The Bidens and Harrises celebrate. President-elect Joe Biden has reportedly pledged to "energize the community of democracies" to counter growing authoritarianism.   © Reuters

Though Trump caused tensions with such countries, greater international cooperation would allow the U.S. to better curb China, which Washington considers an existential threat.

Biden has pledged to "energize the community of democracies" to counter growing authoritarianism. He proposes a summit of democratic countries in his first year. He could be seeking a new framework centering on Group of Seven nations -- like the U.K., France and Japan -- and such other countries as India.

In response to attempts by China to reshape the international order in its favor, Biden has signaled that he will take a tough stance on the country with a focus on trade, security and human rights -- contrasting sharply with the Trump administration on the third.

Though Biden is exploring avenues for bilateral cooperation on climate change and on North Korea's nuclear development, he has slammed mass detentions of Uighur Muslims in China's Xinjiang region, as well as the intensifying crackdown in Hong Kong.

Biden is also pursuing a shift in immigration policy, preparing an executive order to scrap Trump's ban on travelers from multiple Muslim-majority nations.

Still, he is expected to follow Trump in pulling away from the Middle East. Biden, too, wants to swiftly withdraw American troops from Afghanistan and Iraq. He also said he will not move back the U.S. Embassy in Israel, which Trump relocated to Jerusalem from Tel Aviv, though he could recalibrate Washington's heavily pro-Israel stance under Trump.

Trump's actions will be key to how smoothly the transition goes.

Typically, the outgoing president invites his successor to the White House after the election to be briefed on key issues. Barack Obama -- under whom Biden served as vice president -- discussed North Korea and other topics with Trump before the latter's inauguration.

But Trump has yet to concede, and it is unclear whether he will meet with Biden or when.