China seeks to work with next US president, but mocks poll 'farce'

Trump's claim of fraud reminds Indonesians of elections at home

SHANGHAI/JAKARTA -- Beijing is publicly calling for the next U.S. administration to work with China to put bilateral relations back on track -- whether Donald Trump or Joe Biden winds up as president.

At a news briefing in Shanghai on Thursday, Chinese Vice Foreign Minister Le Yucheng said he hoped the new administration will uphold the spirit of nonconflict, nonconfrontation, and win-win cooperation.

In comments published by The Global Times, a Communist Party mouthpiece, Le said that China and the U.S. have differences, but also common interests and broad scope for cooperation. Maintaining and promoting the sound and steady development of bilateral relations conforms to the fundamental interests of the Chinese and American people, and serves the common aspiration of the international community, he added.

The comments come as the election result remains unknown. Biden appears to be closing in on victory, but Trump's campaign is calling on the U.S. Supreme Court to halt vote-counting in Pennsylvania and is asking for a recount in Wisconsin. 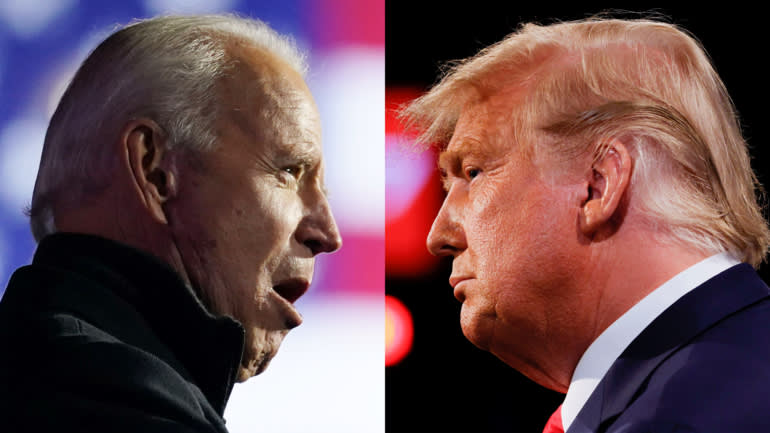 Chinese officials say they hope to cooperate with either Joe Biden or Donald Trump after the result of the U.S. presidential election is known. (Source photos by Reuters)

"The division in the U.S. is triggered by the split in values and conflicts of ideals," Wang wrote. "No matter whether Joe Biden or Donald Trump wins, both are consuming the Americans' trust toward elections and bringing political confrontation and social division to a higher level.

"The partisan confrontation is the epitome of deep-seated divisions in U.S. society. There is no end in sight to the social contradictions. More importantly, the U.S. leadership has no will to solve such woes."

To many in Indonesia, Trump's speech on Wednesday in which he prematurely claimed victory and alleged fraud by his Democratic opponents, is reminiscent of Indonesia's presidential elections in 2014 and 2019. During those two bitterly fought polls, then-opposition leader Prabowo Subianto leveled similar accusations of widespread electoral fraud, but was unable to substantiate them.

"This is actually not too surprising for Indonesia, because Prabowo had done that, too," Kompas TV executive producer Aiman Witjaksono pointed out during a talk show on the U.S. election on Wednesday night.

Hikmahanto Juwana, a professor of international relations at the University of Indonesia, said Trump is laying the groundwork "so that when he is declared the loser, it will be easier for him to tell ... state supreme courts about problematic tallies or votes. So this is Trump's move in anticipation of being declared the loser to Joe Biden."

Former Indonesian Ambassador to the U.S. Dino Patti Djalal said he is hopeful U.S.-Indonesia relations will improve under Biden, after deteriorating rapidly under Trump over the past four years.

"Biden is an international relations expert in the sense that since he had become a senator, and then the vice president [under Barack Obama], he had continually taken care of U.S. foreign policy," Djalal said Thursday morning. A man reads a newspaper reporting on the U.S. election campaign at a stand in Beijing on Thursday.   © AP

India, the Philippines and South Korea appear happy with either Trump or Biden as president.

"Our relations with the United States are really based on bipartisan support. You see it in Congress, you see it at the public levels," India's Foreign Secretary Harsh Vardhan Shringla told Germany's DW News in response to a question on whether there would be any change under a Biden presidency.

"We do believe that we have forged a relationship that today has withstood the test of time, is very comprehensive and multifaceted. We not only share the same values and principles but we also, I think, have the same strategic vision in what could be a bilateral, regional or multilateral relationship," he said.

In an interview with CNN Philippines on Wednesday morning, President Duterte's spokesman, Harry Roque, was asked about the impact of the U.S. presidential election on Philippine-U.S. ties. Roque said he expects no major changes in ties, but acknowledged "personal relations" between Duterte and Trump.

In South Korea, presidential Blue House spokesperson Kang Min-seok said: "We will continue to keep strong the ROK-U.S. alliance, as well as cooperate in developing it. In addition, we will actively cooperate with the new government to achieve denuclearization and a peace regime on the Korean Peninsula."

Meanwhile, the chairman of the Federation of Thai Industries, Supant Mongkolsuthree, said a Biden victory would likely help ease tension between the U.S. and China, and that could indirectly send a positive message across the world.

"Although the trade war will not immediately be wiped away, we still believe that the trade and investment outlook would be better, and world trade would get back to normal, which is good for every country," Supant told Nikkei Asia.

Taiwanese President Tsai Ing-wen, who has been strongly backed by the Trump administration, posted on her Facebook page that Taiwan will continue the close exchanges with the two political parties in the U.S., and she is confident that "supporting Taiwan" is the mainstream consensus in America.