Users in a pro-Trump group employ a train-like WeChat phenomenon known as "jie long" that allows them to copy the previous person's message, add their own name and donation amount and post it in the group again -- an effective way to keep the message highly visible.

The chat history of a thread reviewed by Nikkei Asia showed nearly 40 pledges ranging from a few hundred dollars to around $4,000, with links to WinRed, a Republican Party fundraising website. The messages make recounts sound like a life-or-death situation.

"To be swollen in darkness or conquer the darkness, [that is the question]. It's no surprise that the Biden team cheated," one Chinese-language post read on the thread. "The real battle has just begun, President Trump is far from losing."

Trump and the GOP have been sending emails and text messages seeking money from voters ever since Joe Biden was declared the winner. While the sites ask donors to "defend the integrity of our election" with recounts, the fine print says half the donations will instead go to election campaign debt retirement. Some even changed the disclaimer from 50% to 60%.

Last week, the language of the minutiae on some websites changed again to state that 60% of donations will instead go to Trump's newly founded leadership political action committee (PAC), Save America, according to The New York Times.

It is not rare for campaigns to end an election in debt and use donations to pay it back, but some analysts say using recounts to bring in money is disingenuous.

"I've never seen a presidential candidate, much less a sitting president, use misleading fundraising appeals to pay down that debt," said Brendan Fischer, director of federal reform at the nonpartisan Campaign Legal Center in Washington. "Typically candidates want to continue going back to their supporters for more money, and that requires some degree of trust between a candidate and their supporters."

As long as there is a disclaimer, it is legal to direct some recount funds to other purposes, Fischer said. The recount fund, as a new campaign, allows Trump to get money from donors who have already reached their donation limit.

The fine print is often ignored even by English speakers, let alone Chinese-speaking conservatives on WeChat, who are largely first-generation immigrants in their 60s and 70s.

Nationwide, 44.7% of Chinese Americans who speak Chinese at home have limited English proficiency, according to Sunny Shao, a researcher at AAPI Data who focuses on Chinese Americans on WeChat. Recount fundraising messages and articles on WeChat have not mentioned debt retirement or the new PAC.

Shao has analyzed Chinese Americans' campaign contributions to the entity Donald Trump for President from 2019 to October this year by cross-referencing Chinese donor last names and zip codes. According to her rough map, Chinese Americans living in California gave the most to Trump, followed by New York, Texas and Washington.

"The direct audience of those articles are the ones who are dependent on translated content; they don't have the linguistic ability to fact-check," Shao said. "The framing of those articles make you think that your money is going to the recount efforts."

Shao also said the Chinese Trump loyalists have blind trust in how Trump uses their donations because "he knows best" where to allocate the funds. Some conservative accounts have also been silent on this matter. 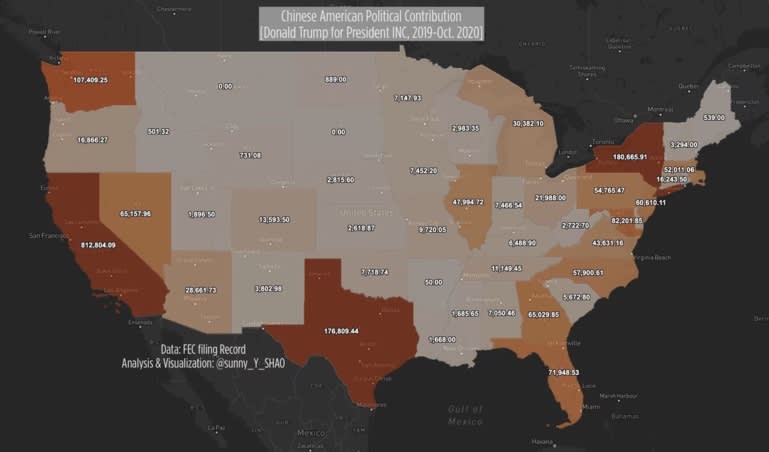 Chinese Americans have donated over $1 million to President Trump's campaign this this election cycle. (Map provided by Sunny Shao at AAPI Data)

Many Chinese American conservatives who were Trump supporters in 2016 have now walked away from Trump, leaving the community split into Trump loyalists, never-Trump Republicans and independents.

"At this stage [of the election], it's pretty much settled, but [the Trump loyalists] are adding more uncertainty and making people live in fear and anxiety, I think their actions are deepening societal divisions," Wu Yiping, 58, a community leader and a former Trump supporter from Long Island who voted for a third-party candidate this year, told Nikkei Asia in Mandarin.

Wu is angry that Trump has been pitting Americans against each other, and the "China virus" name-calling was "the last straw" for him to ditch Trump.

Cliff Li, head of the National Committee of Asian American Republicans, which endorsed Biden this year, warned that despite the Nov. 3 election results, "Trumpism is still very much alive and it's concerning."

Experts said the Trump campaign's filings to be released in early December will reveal more about its debts, but Save America hints at what is coming next.

"Trump has never been too sensitive to pay off his debts. ... [But] this leadership PAC can be used to keep him in the spotlight," said Christopher Witko, a political science professor at Pennsylvania State University. "He's always trying to find a way to make money, and I think this is just another way for him to make money. It's possible that his associates would be benefiting from this as well."

Because Save America is not a reelection campaign, it is subject to fewer restrictions on expenditures. The PAC can give to other political candidates, entities and firms, as well as pay for Trump's personal expenses such as hotel stays and private jets, according to Witko.

Trump's campaign spent $19 million at Trump properties through mid-October, and the PAC could "funnel even more into the president's pockets," according to a report by the Center for Responsive Politics, a nonpartisan research group tracking money in U.S. politics.

Save America could also lay the groundwork if Trump wants to run for president again in 2024.

"The true [recount] believers are a pretty small minority of people. They're people who are playing along with Trump to keep him happy," Witko said.

"Then you have probably the largest group, other Republican politicians, cynically using Trump's anger and the arguments about the stolen election to raise money and to keep up the intensity for the Georgia seats," two races where the Republican majority in the state Senate will be decided in runoffs in January.