How the US president's positive coronavirus test might affect the election 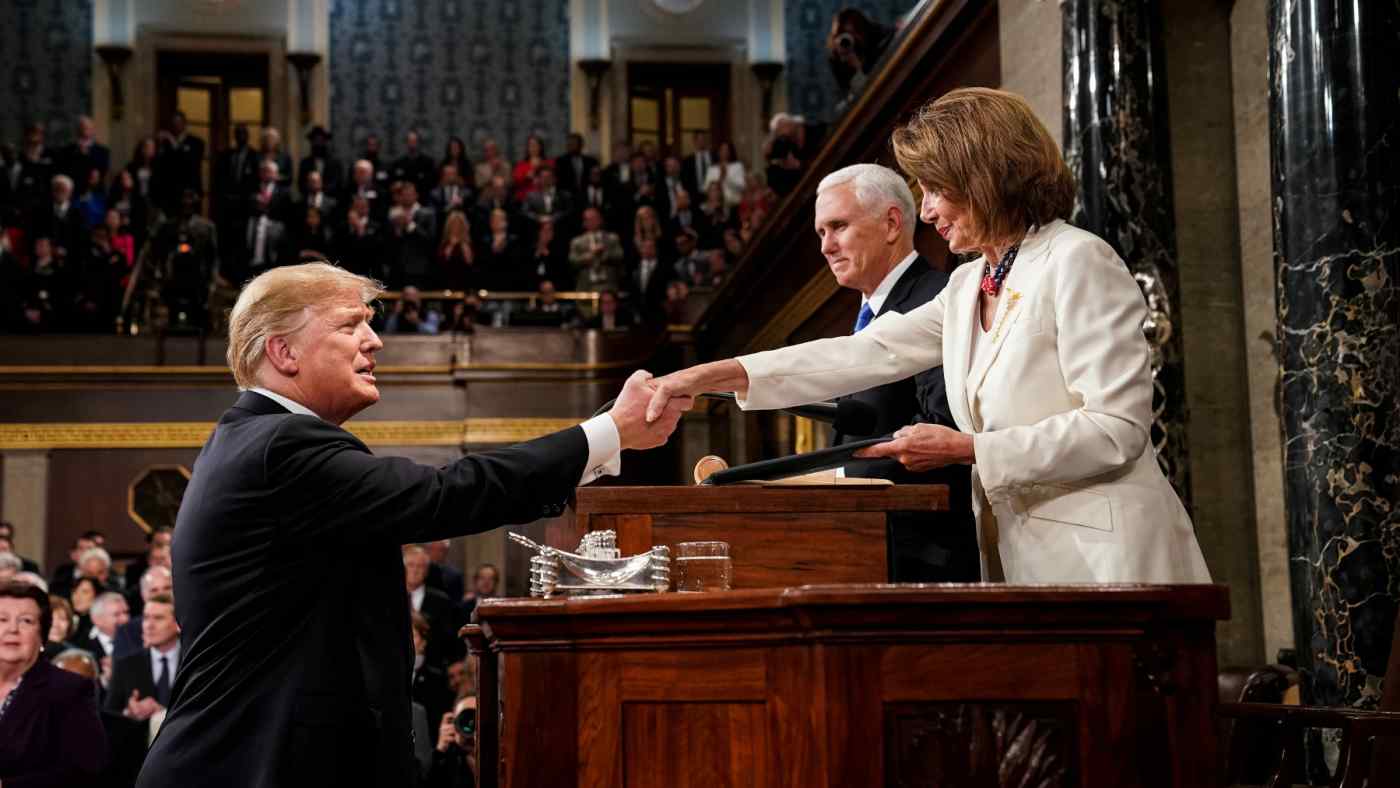 President Donald Trump shakes hands with Speaker of the House Nancy Pelosi before delivering the State of the Union address in February 2019, as Vice President Mike Pence looks on. Pence and Pelosi are second and third in the line of succession if the president is incapacitated.   © Reuters
ALEX FANG, Nikkei staff writerOctober 3, 2020 06:17 JST | North America
CopyCopied

American politicians and world leaders alike have wished Trump and his infected wife, Melania, a speedy recovery. But the diagnosis brings to the fore the issue of what happens to the election if a major-party candidate falls seriously ill or even dies.

Here are five things to know about possible outcomes for the administration if Trump cannot continue serving, as well as how the presidential election might look with an incapacitated candidate.

What happens to Trump's presidential duties if he is too ill to do his job?

Under the 25th Amendment to the U.S. Constitution, Vice President Mike Pence is first in line to take over as acting president if Trump no longer has the capacity to carry out his duties -- from nominating Supreme Court justices to commanding America's military forces and nuclear arsenal. House Speaker Nancy Pelosi is next in line under federal law.

A written declaration for this purpose must be transmitted to Congress by Trump -- or, if he is too sick to even do that, by Pence and a majority of either Trump's cabinet "or of such other body as Congress may by law provide."

To return to his duties, Trump must write to Congress again.

Could such an event delay the election, which falls on Nov. 3 this year?

"No, this will not cause a delay in the election, the date of which is required by federal law," Rebecca Green, co-director of the Election Law Program at William & Mary Law School, told Nikkei Asia.

Congress does have the power to amend the law and select a different election day. But its House of Representatives, currently under the Democratic Party's control, is extremely unlikely to do so for Trump.

The U.S. has never delayed a presidential election before, even in wartime.

If a presidential candidate is deceased or incapacitated before the election, does he stay on the ballot?

Each party's national committee has the power to replace its candidate on the ballot.

But this close to the election, with early and mail-in voting already underway, "it seems impossible for candidates to come up with a new name to replace a name on the ballot without starting the whole election process over," argued Rick Hasen, professor of law and political science at the University of California, Irvine, on his Election Law Blog.

"While things are not certain, what's most likely that the election would take place on time with the deceased or incapacitated candidate's name on the ballot," Hasen wrote.

How would a candidate's incapacitation or death affect how Electoral College electors cast their votes?

After Americans cast their votes for president, members of the Electoral College formally vote in December for the candidate who won in their respective states.

"The question becomes whether state law gives Electoral College electors the ability to vote for someone other than the winner of the popular vote in their state," William & Mary's Green said.

In certain states, electors are legally bound to cast their votes for the popular winner in their state -- a rule upheld by the Supreme Court this July. But the ruling "did not resolve whether electors could constitutionally vote for someone besides the popular winner in their state in the event that person dies after the election but before the Electoral College votes," Green said.

New York University constitutional law professor Richard Pildes holds that even in states where electors are formally bound to vote for a dead or incapacitated candidate, they will vote for the replacement identified by the party committee.

What are the implications of different electoral vote scenarios?

"If the RNC [Republican National Committee] were deeply divided, and Republican electors then did not coalesce around a single replacement candidate, there might not be a majority winner in the electoral college," Pildes wrote in a Washington Post analysis. "In that case, the House would choose the president from among the top three vote getters in the electoral college. In that process, each state delegation gets one vote."

UC Irvine's Hasen thinks that in the event Trump can no longer serve, the flexibility of the Electoral College "could lead to a whole lot of mischief if, say, the Pennsylvania Republican legislature tried, over the Democratic governor's objection, to appoint electors to vote for Pence" despite a vote by the people of Pennsylvania for Biden over Trump.