From China to India, exporters brace for Biden carbon policy SINGAPORE -- As the U.S. presidential campaign enters its final stretch with Joe Biden holding a steady lead in the polls, Asian governments are gearing up for changes in American foreign policy. And if the former vice president is elected, trade negotiators will be paying much more attention to Washington's environmental agenda.

This would mean a tax on carbon-intensive imports from heavy polluters, leveling the playing field for producers in countries with high costs and environmental standards. It comes as the European Union plans to introduce a similar scheme as part of its European Green Deal.

"It doesn't seem right that some countries are trying to do the right thing with the planet and putting themselves at a disadvantage," said Jeff Colgan, director of the Climate Solutions Lab at Brown University.

Colgan recently released a white paper calling on Biden, if elected, to set up a "climate club" with the EU and China that would include carbon adjustments on all their borders. "No country will want to be outside the tariff wall," he said.

But in the near term, at least, unilateral American border carbon adjustments would likely intensify existing trade tensions with China, which is the world's largest polluter followed by the U.S. 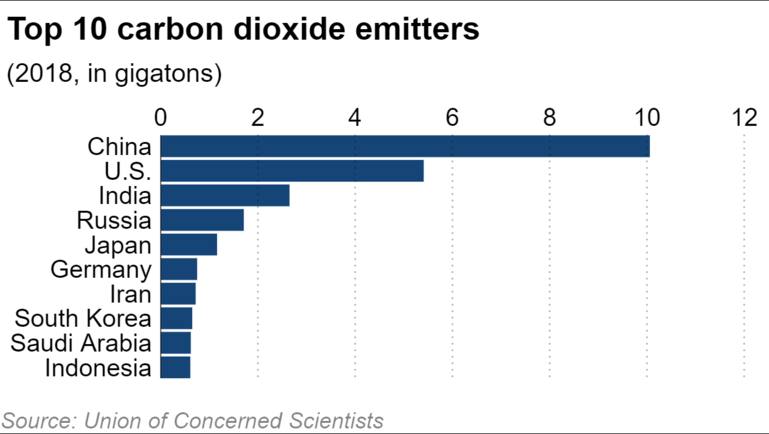 Longstanding allies like Japan, South Korea and Australia -- also among the world's most prolific carbon emitters on a per capita basis -- could feel the effects, too.

"[Biden is] also going to push our friends to do more as well, and to step up and fulfil their responsibilities to what is fundamentally a global problem, that every country needs to be participating in and contributing to," Jake Sullivan, one of Biden's top foreign policy advisers, recently said.

It is not clear how a Biden administration might implement border carbon adjustments, but a hypothetical tax of $40 per ton of emissions would increase the cost of producing aluminum by over 20% in China, India and Australia, according to a 2019 research note from Morgan Stanley.

This would effectively make it cheaper to buy aluminum from otherwise high-cost Britain, which can produce the metal more cleanly, than China.

Chinese steel, which is often created in coal-powered furnaces, would also be penalized, while Indian steel produced in more efficient mini-mills that run off electricity could receive a boost. ArcelorMittal, the Europe-based manufacturer controlled by Indian steel magnate Lakshmi Mittal, has come out in favor of border carbon adjustments. While U.S. trade hawks will applaud tariffs on Chinese goods, Biden also plans to make American polluters "bear the full price" of their environmental impact. His campaign has previously said that it would seek to price carbon domestically, though there are signs it is moving away from that in favor of setting strict environmental standards.

Either way, this suggests that U.S. manufacturers would not have an undue advantage over partners with comparable environmental standards. Many advocates of border carbon adjustments say they are not protectionist, but just want to ensure that environmental impact is priced into the cost of doing business.

Fee-less access to the U.S. market would thus be a reward for countries that clean up their act. China could eventually become a beneficiary, depending on progress with a planned carbon trading scheme and President Xi Jinping's vow in September to reach carbon neutrality by 2060. And Japanese Prime Minister Yoshihide Suga in late October committed the world's third largest economy to carbon neutrality by 2050, though he provided few specifics. South Korea quickly matched the pledge. There is likely to be resistance from India -- ArcelorMittal aside -- and Australia, which repealed carbon pricing in 2014.

While New Delhi has not publicly commented on either Biden's or the EU's plans, it has pushed back on similar proposals in the past. Nevertheless, environment advocates there are hoping to frame border carbon adjustments as an opportunity to grow Indian exports from more energy-efficient sectors like jewelry and chemicals.

"Electricity is expensive in India, so we tend to use it more efficiently," said Karthik Ganesan, a Delhi-based research fellow at the Council on Energy, Environment and Water. "There's a big economic opportunity for India if we were to make our manufacturing process more efficient."

Over in Australia, Kate Crowley, an environmental policy professor at the University of Tasmania, said there is "no appetite" among the country's politicians to price carbon.

"We're in a strange stage where we need action more than ever, but there's not really positive messaging from either the federal government or the opposition," she said.

But there are also glimmers of change. Devastating wildfires have become a yearly affair and state governments have facilitated significant investment in renewables like wind and solar power. Rio Tinto, the influential Anglo-Australian miner, has sold off its coal operations and, egged on by shareholder pressure, criticized the Minerals Council of Australia, a powerful industry lobby.

"The EU has said that it expects climate laggards to be punished and I expect [border carbon adjustments] to disrupt global trade and be a game changer," Crowley said.