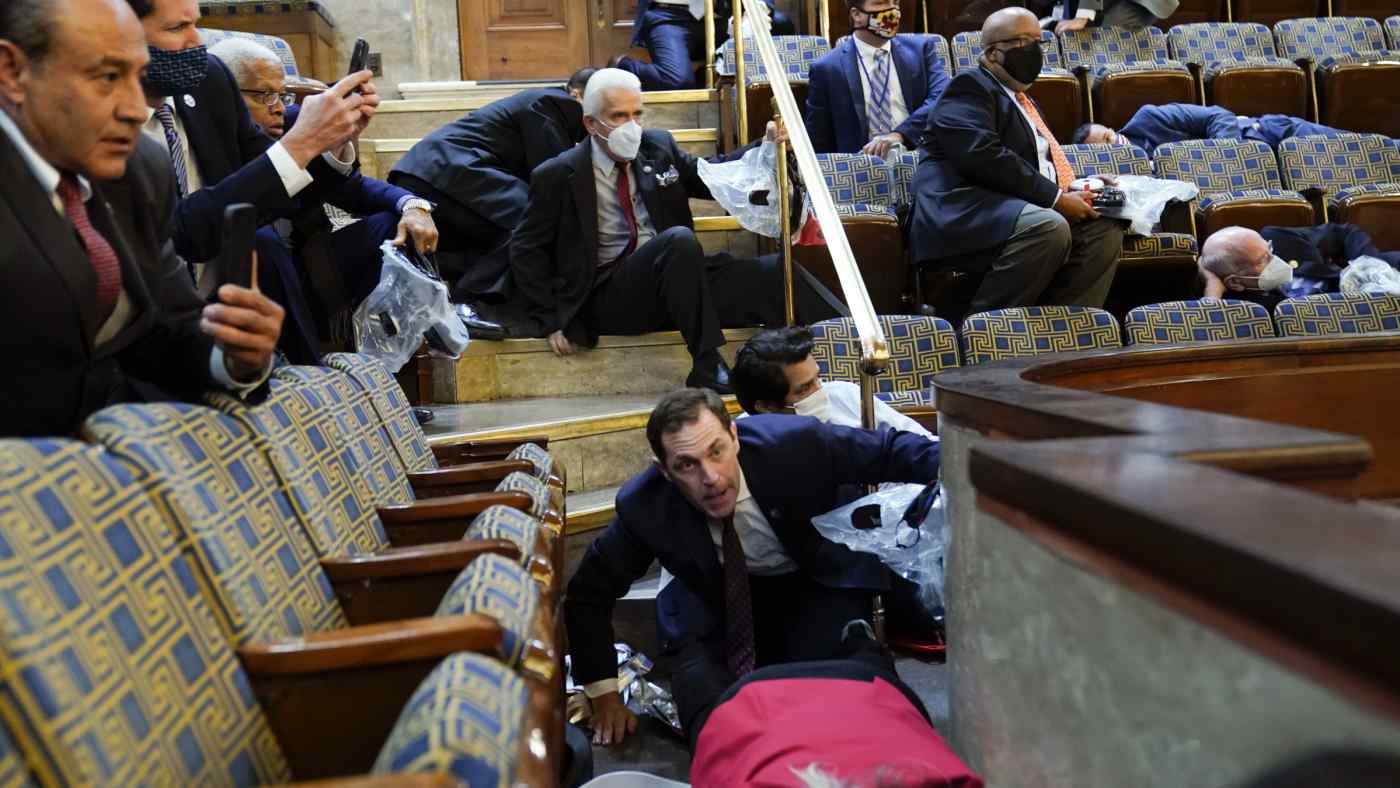 The meeting went into lockdown, and U.S. lawmakers were quickly evacuated from the congressional chamber. Vice President Mike Pence, who was presiding over the certification process, was rushed to safety. Footage from C-SPAN showed congressional staff and reporters holed up inside the Capitol building with doors barricaded.

Guns were drawn and fired inside the chamber. A woman who was shot in the neck by Capitol police later died at a hospital, according to the Metropolitan Police Department, which said another three people died in separate "medical emergencies." Flash grenades and tear gas were used to disperse the mob gathered on the steps of the legislative body.

The joint session of the Senate and House of Representatives to confirm the election result is required under federal law. The violent disruption of this meeting represents a major challenge to the democratic process.

The proceedings restarted later in the day, and Pence announced the certification of the election at about 3:40 a.m. local time. Republican objections to certain states' results made for a long night. The House and Senate voted down moves to overturn the election in Arizona and Pennsylvania. Similar efforts against results from Michigan and Nevada did not have the necessary support of a senator to proceed.

Meanwhile, Americans and much of the world remained stunned by the violence that had unfolded.

District of Columbia Mayor Muriel Bowser and the office of House Speaker Nancy Pelosi had requested the National Guard to assist in clearing Capitol Hill. A Washington Post reporter tweeted that the Defense Department initially denied a request to deploy the troops. But White House press secretary Kayleigh McEnany tweeted Wednesday afternoon that at Trump's orders, the National Guard was on its way, along with other federal protective services.

Bowser ordered a 6 p.m. curfew in the city and extended a public emergency until Jan. 21, after Biden's inauguration. Twitter and Facebook temporarily froze Trump's accounts over his frequent posts whipping up his base with questionable claims.

President-elect Biden said Wednesday that "the scenes of chaos at the Capitol do not reflect a true America."

The Democratic former vice president ran his campaign on promises to restore American leadership abroad and to lead "the democratic world to meet the challenges of the 21st century," vis-a-vis competition from a rising China and its authoritarian model. Wednesday's events, undoubtedly a tarnish on the image of American democracy, will complicate this task.

Speaking from his transition headquarters in Wilmington, Delaware, Biden said, "I call on President Trump to go on national television now to fulfill his oath and defend the Constitution, and demand an end to this siege."

The protesters marched to the Capitol carrying American and Trump flags after the president addressed the crowd during a rally at the White House Ellipse. Supporters of President Donald Trump clash with police officers in front of the U.S. Capitol building in Washington on Jan. 6.   © Reuters

"We will never give up. We will never concede. You don't concede when there's theft involved," Trump told a crowd of supporters -- many of whom wore MAGA hats, but not masks to protect against coronavirus.

Trump also encouraged attendees to march on to the Capitol, where Congress was due to start the certification process for Biden's win.

"We will stop the steal," Trump declared, despite losing one legal battle after another in the two months since the November election -- including in the Supreme Court -- in his attempts to contest election results in swing states such as Wisconsin and Pennsylvania.

Richard Haass, president of the New York-based think tank Council on Foreign Relations, tweeted: "If the post-American era has a start date, it is almost certainly today."

At a CFR virtual event later Wednesday, Haass, director of policy planning for the Department of State in the George W. Bush administration, said: "The world will feel a sense of schadenfreude, particularly the more authoritarian regimes around the world, because this will make it incredibly difficult for us to lecture them or put pressure on them by our example."

"Indeed they will use this as justification for their own authoritarian tendencies," he said.

"For allies, it will sap the trust that is at the core of an alliance," said Haass.

The U.S. president has held to his unproven claims of election fraud and a quixotic quest to overturn the election outcome long after even allies -- from Fox News to Senate Republican leader Mitch McConnell -- recognized Biden's victory. Emily Murphy, a Trump appointee and head of the General Services Administration, gave the green light to Biden's transition on Nov. 23 after a two-week delay. 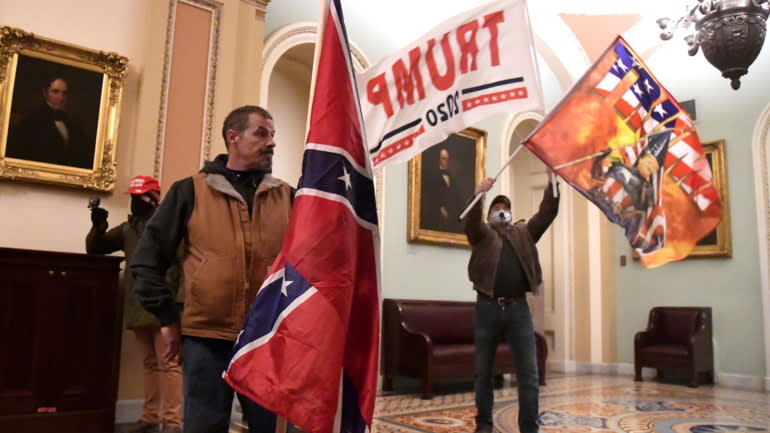 Rioters supporting President Donald Trump, including one carrying a Confederate flag, demonstrate on the second floor of the U.S. Capitol after breaching security defenses Jan. 6.   © Reuters

In recent days, Trump has pinned hopes -- performatively or otherwise -- on Pence to overturn the election result, after all 50 states certified their Electoral College votes and it became clear Congress would count those votes accordingly.

After The New York Times published a report that Pence told him that as vice president he lacked the power to interfere with the election outcome, Trump issued a statement denying the account.

"All Vice President Pence has to do is send it back to the states to recertify, and we become president and you are the happiest people," Trump claimed again at the Wednesday rally. "I hope Mike is gonna do the right thing."

Meanwhile, on Wednesday, Pence sent a letter to Congress in which he stated, "It is my considered judgment that my oath to support and defend the Constitution constrains me from claiming unilateral authority to determine which electoral votes should be counted and which should not."

While rioters stormed the Capitol building, Trump tweeted that "Mike Pence didn't have the courage to do what should have been done to protect our Country and our Constitution, giving States a chance to certify a corrected set of facts, not the fraudulent or inaccurate ones which they were asked to previously certify."

Trump later asked the rioters to "remain peaceful" in a tweet, but the situation on the ground rapidly turned into chaos.