Trump to be hospitalized for 'next few days'

President has not transferred powers to Pence, White House says 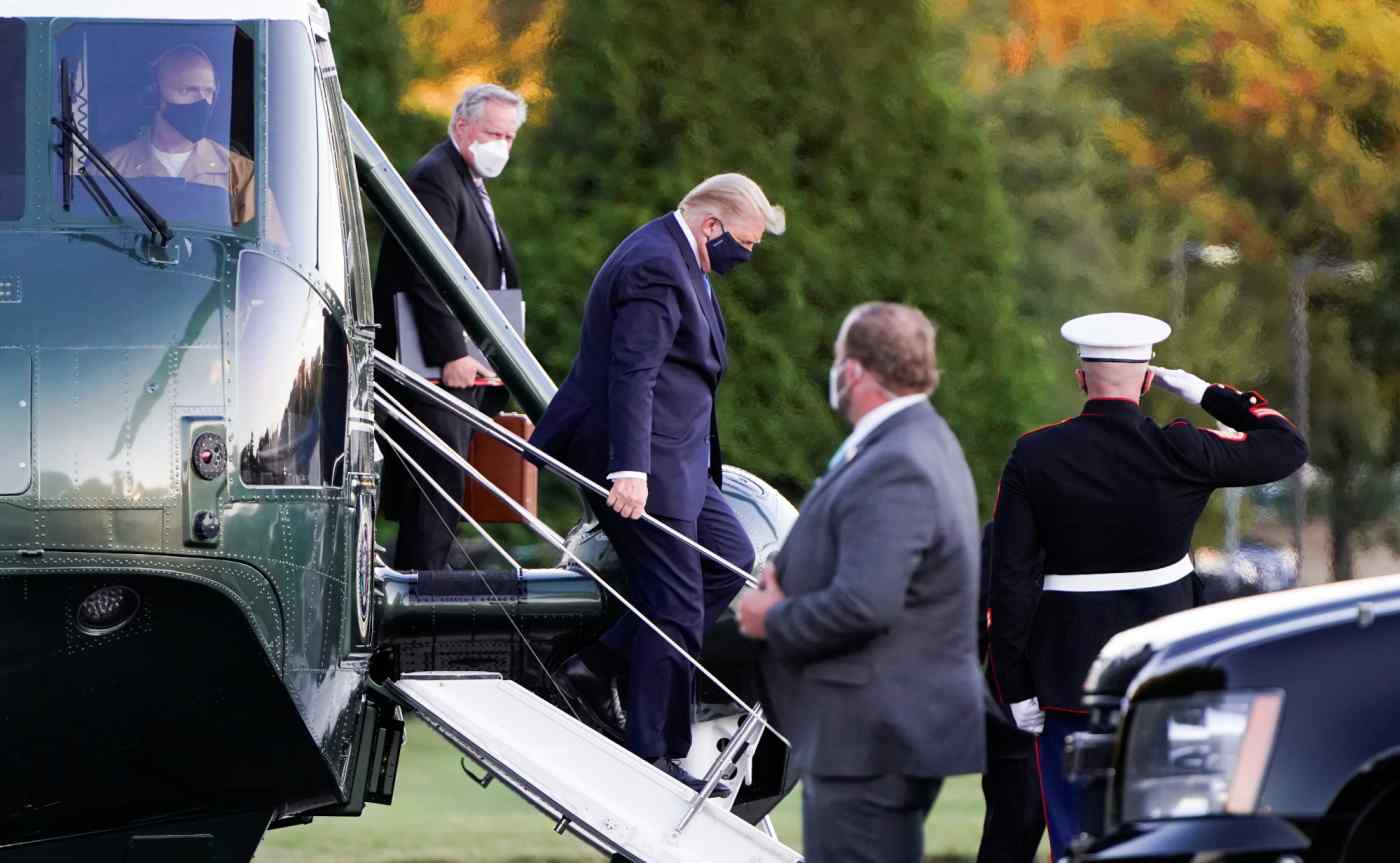 NEW YORK -- The U.S. presidential election took an unexpected turn Friday as President Donald Trump announced that he and his wife had tested positive for COVID-19.

White House press secretary Kayleigh McEnany announced in the afternoon that Trump, 74, will be hospitalized for the next few days.

"President Trump remains in good spirits, has mild symptoms, and has been working throughout the day. Out of an abundance of caution, and at the recommendation of his physician and medical experts, the President will be working from the presidential offices at Walter Reed for the next few days," she said in a statement.

A mask-wearing Trump later walked to his presidential helicopter, giving a thumbs-up to the press corps, and flew to Walter Reed National Military Medical Center in Bethesda, Maryland.

"I think I'm doing very well, but we're going to make sure that things work out," Trump said in a brief video posted to Twitter.

Trump had been staying at the White House residence after testing positive.

Sean Conley, physician to the president, said in a memo that Trump has received a single dose of Regeneron's polyclonal antibody cocktail. The technique is said to be used on a wide range of illnesses but to have only limited data on its effectiveness against COVID-19.

White House communications director Alyssa Farah made clear to U.S. media that presidential power has not been passed on to Vice President Mike Pence.

"The president is in charge," she said.

Chief of Staff Mark Meadows told reporters earlier Friday that the president "remains on the job" and that the first thing he asked in the morning was "How's the economy doing?"

The New York Times cited one source saying the president has coldlike symptoms and had seemed lethargic at a fundraiser on Thursday.

The White House canceled most of the scheduled events on the president's itinerary Friday, including his intelligence briefing as well as campaign events in Washington, D.C., and the battleground state of Florida. A phone call on COVID-19 support to vulnerable seniors was the sole event left on the president's schedule, but Trump later reportedly asked Pence to replace him.

Trump's opponent, former Vice President Joe Biden, tweeted Friday morning, "Jill and I send our thoughts to President Trump and First Lady Melania Trump for a swift recovery. We will continue to pray for the health and safety of the president and his family."

Biden later tweeted that he and his wife had tested negative. "Thank you to everyone for your messages of concern. I hope this serves as a reminder: wear a mask, keep social distance, and wash your hands," he wrote.

With just over a month before the election, the administration and the financial markets scrambled to assess what lies ahead. 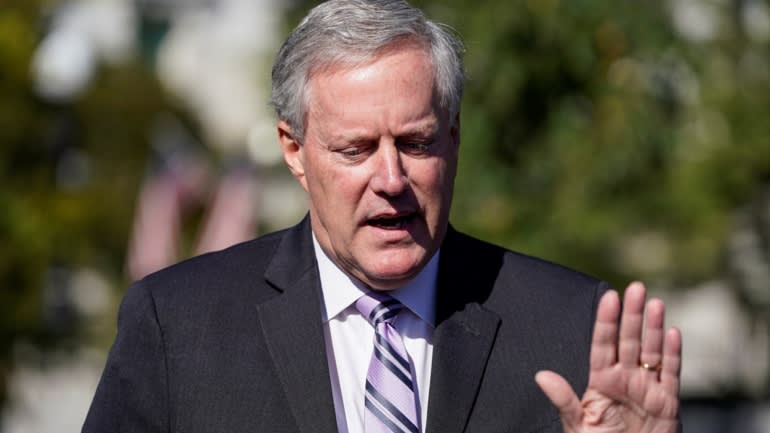 White House Chief of Staff Mark Meadows speaks to the media in Washington after President Trump announced that he and U.S. first lady Melania Trump have both tested positive for the coronavirus disease on Oct. 2.   © Reuters

Pence, 61 and first in the line of presidential succession if Trump is incapacitated, tested negative for the virus, Pence's spokesman said before the market opened. Pence is followed by the speaker of the House of Representatives, Nancy Pelosi, 80, and Chuck Grassley, 87, the president pro tempore of the Senate, according to the 1947 Presidential Succession Act.

Secretary of State Mike Pompeo, 56, and Treasury Secretary Steven Mnuchin, 57 -- who are fourth and fifth in line, respectively -- have also tested negative.

Asked in a press briefing with the traveling press en route to Croatia Friday, Pompeo said he will "spend the next few hours and try to figure out what the medical team says," on whether he should continue with his planned trip to Asia from Sunday.

"I've talked to my doctor back in Washington, the State Department medical team. They said it would be perfectly fine to make both of those trips, but we're going to continue to look at it," he said.

Pompeo is scheduled to attend a "Quad" foreign ministers meeting in Tokyo on Tuesday, with counterparts from Japan, India and Australia.

He said he last met with the president on Sept. 15.

The positive test result has thrown the president's campaign schedule into disarray. Quarantine means none of his freewheeling rallies -- a big part of his reelection effort. His Saturday event in another crucial swing state, Wisconsin, looks to be called off as well.

Trump, trailing in most polls, had hinged his hopes on the three presidential debates to muster a comeback. The next debate, scheduled for Oct. 15 in Miami, Florida, is now in doubt.

Trump is the latest high-profile world leader to contract the virus, including Brazilian President Jair Bolsonaro and U.K. Prime Minister Boris Johnson. Both Bolsonaro and Johnson fully recovered from the illness.

Russian President Vladimir Putin also sent a message to the first couple, the Kremlin said. "I am sure that your inherent vitality, vigor and optimism will help you overcome the dangerous virus," Putin wrote.

Hua Chunying, spokesperson for China's foreign ministry, tweeted: "Saddened to learn #President and the #FirstLady of the #US tested positive. Hope they both have a speedy recovery and will be fine." The foreign ministry of Taiwan also sent best wishes on Twitter.

Futures had declined early Friday on the news that Hope Hicks, one of Trump's closest aides, had tested positive for the virus, then dropped sharply after Trump's positive test was confirmed. Questions remain as to whether this will affect the two presidential debates scheduled for this month.

Also factoring into the drop was a weaker-than-expected jobs report for September, with nonfarm payrolls rising by 661,000 compared with the 800,000 expected by economists surveyed by Dow Jones.