Trump vs. Biden: Five things to expect on election day 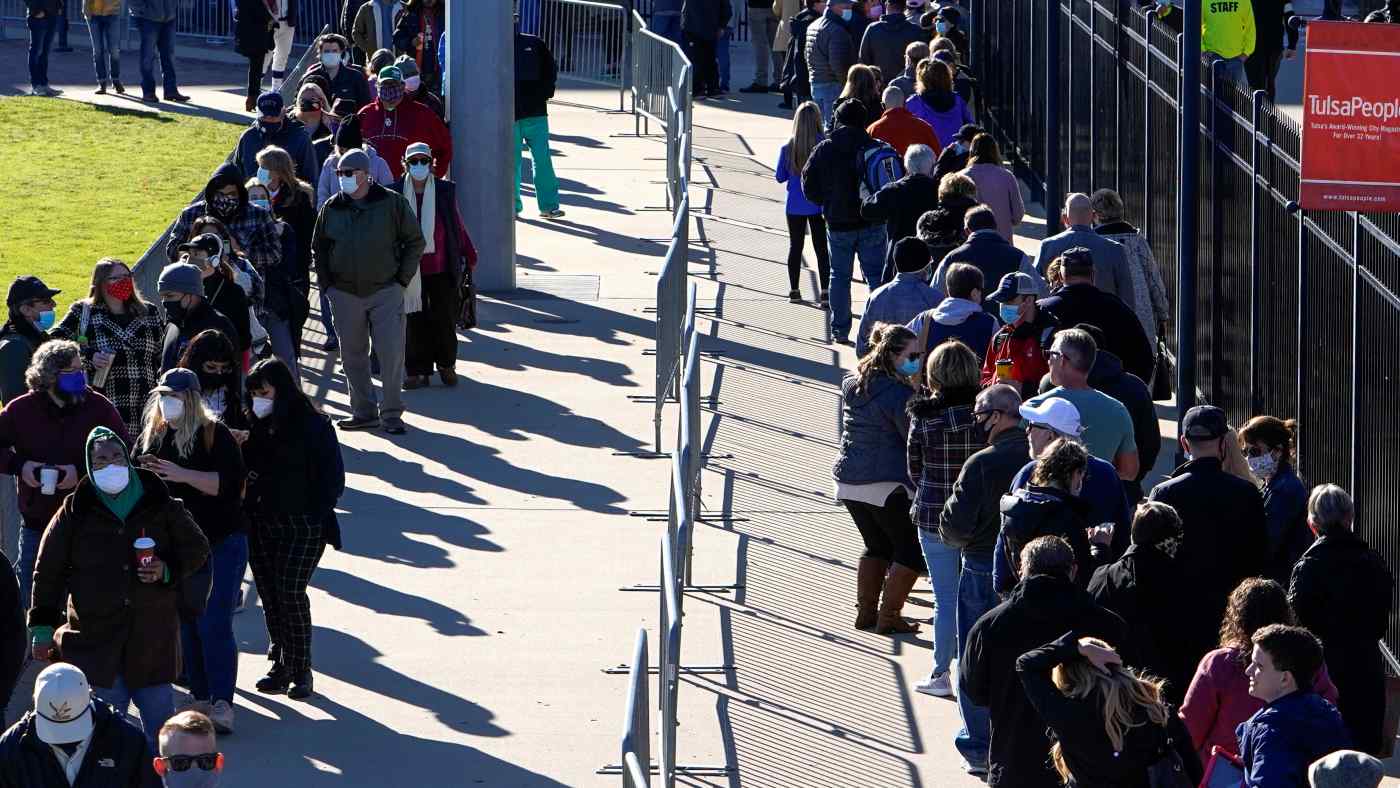 WASHINGTON/NEW YORK -- Election day is almost here. With a surge in mail-in voting spurred by the pandemic and soaring voter interest, the world is about to witness an unprecedented U.S. presidential election.

At the same time, reported delays in mail deliveries and disparate state rules about vote counting have heightened anxiety about the election as the country remains deeply divided.

Even if such an extreme scenario as a drawn-out legal battle does not come to pass, there is a good chance that voters won't know the winner of the presidency on election night.

Here are five things to watch for on election day.

Voter turnout this year could be the highest in 112 years, as a deeply divided electorate heads to the polls to choose their next leader.

As of Friday, over 86 million people turned in their ballots early, according to Michael McDonald, a political-science professor at the University of Florida.

That's a 48% increase from the 58 million early voters in 2016, when a total of 136 million voters, or just over half of voting-age citizens, took part in the election.

Also aggressive turnout efforts -- mainly by Democrats -- are spurring voters who sat out the 2016 election to cast their ballots this year.

McDonald predicts that 150 million people will vote this year, which would amount to a 65% turnout, a number not seen since 1908.

Nate Silver, who heads the elections analytics site FiveThirtyEight.com, forecast that as many as 165 million people will be casting their ballots.

In Travis County, Texas, which includes the state capital of Austin, 486,000 people cast their ballots early as of Wednesday. The figure exceeds the total number of votes counted in 2016 by 2%, and the margin is expected to grow further by election day.

In North Carolina, 3.87 million people voted early, including 26% who did not vote in the 2016 election. During this spring's primary election, turnout in some areas shrank due to the impact from the coronavirus. With a massive turnout expected at the polls Tuesday, along with measures to prevent the spread of the coronavirus, some nongovernmental organizations have already warned voters to expect delays.

The League of Women Voters has said people should plan on extended wait times "as poll workers have to regularly disinfect equipment and stations."Outside the polling station, voters will be standing in line -- six feet apart -- sometimes in freezing temperatures.

In Wisconsin, a battleground state in the Midwest, the election commission has asked voters to "please be patient waiting for results." When early voting started in mid-October in the state, which Trump won in 2016, lines began to form outside polling stations before dawn.

The limited number of in-person polling stations is also contributing to the long lines.

The southern state of Georgia had 331 fewer voting sites in June 2020 than in November 2012 after county officials began to close sites following a 2013 Supreme Court ruling striking down the Voting Rights Act of 1965. Local officials say the sites were closed to save taxpayers' money but voting rights activists say the move was to suppress Black voters.

Although the metropolitan area around the city of Atlanta has about half the voters in the state, it only has 38% of the polling places, according to an analysis by Georgia Public Broadcasting and ProPublica.

A growing number of experts have voiced concerns about delays in mail deliveries as well. Absentee ballots are taking longer to reach election offices, particularly in battleground states, as the Postal Service grapples with the surge in mail-in ballots. Former Vice President Joe Biden stumps in Minnesota as he crisscrosses the Midwest in his final stretch of the presidential campaign.   © Reuters

U.S. presidential elections are determined by the Electoral College. Electoral votes are distributed based on the results of the popular vote in each state, in proportion to their population, with 270 out of 538 needed to secure victory.

Thirty-five states and Washington, D.C., tilt heavily toward one party or the other and will likely be able to declare results shortly after the polls close.

California and New York, for example, are strongly Democratic and all but certain to go for Biden, while Tennessee and Oklahoma are seen as sure wins for Trump.

But the other 15 -- traditional "battleground" states and others where polling shows a tight race -- may prove more problematic.

Voting rules and systems differ from state to state. Five of the 15 close-fought states, including North Carolina, Florida and Arizona, can start counting ballots before Nov. 3, according to the National Conference of State Legislatures. That could help these states call a likely winner relatively early.

But the remaining 10, including the closely watched battleground states of Michigan, Wisconsin and Pennsylvania, cannot begin tabulation until election day. In a close race, results in these states could still be up in the air on Wednesday morning.

This year, a record-breaking 55 million mail-in ballots have already been returned, according to a researcher at the University of Florida.

Absentee ballots require more time and effort to process than in-person votes, as each must be checked to confirm eligibility and ensure that the information matches up with voter rolls.

Some states accept mail-in ballots that arrive after election day. Of the 15 states with close races, six will count votes that come in late -- up to Nov. 13 in Ohio -- if they are postmarked by Nov. 2 or Nov. 3, depending on the state.

The more votes arrive after election day, the longer it will take to confirm the results.

The 2000 race between George W. Bush and Al Gore hinged on Florida, where ballot issues led to a legal battle over a recount. The case was ultimately decided by the Supreme Court, and Bush won the state by 537 votes, 37 days after the election.

Typically, once media outlets and other sources project a majority of electoral votes going to one candidate, the other concedes defeat and congratulates the victor. But Trump has hinted that he may not concede if he loses, which would set the stage for a long, drawn-out battle over the results. Some Democrats see a real possibility for Trump to prematurely declare himself the winner soon after battleground states start counting their votes.

Trump won Pennsylvania, Michigan and Wisconsin in 2016. These states will not start counting early and mail-in votes until Tuesday, so in-person votes, which are expected to skew toward Trump, could give him an early lead.

But early and mail-in votes are seen skewing toward Biden. Once states start processing those votes, Trump's lead could narrow or even disappear in a phenomenon called the "red mirage." Nearly 70% of Pennsylvania's mail-in votes are believed to be for Biden.

Josh Mendelsohn, CEO of New York-based think tank Hawkfish, warns that Trump could unilaterally claim a victory and stop counting mail-in votes. The president has repeatedly argued that mail-in ballots would lead to massive electoral fraud, likely in an attempt to sow distrust in any changes to the early results.

The Biden camp is expected to sue if Trump orders states to stop counting mail-in ballots. In preparation for this, Trump rushed a new conservative justice onto the Supreme Court, securing a 6-3 majority in the country's highest court.

The opposite of the red mirage could happen in Florida, which has already started counting mail-in ballots. Biden is believed to be leading in early voting, holding 52% of the vote to Trump’s 43%. But that lead could shrink as votes made on election day are counted. 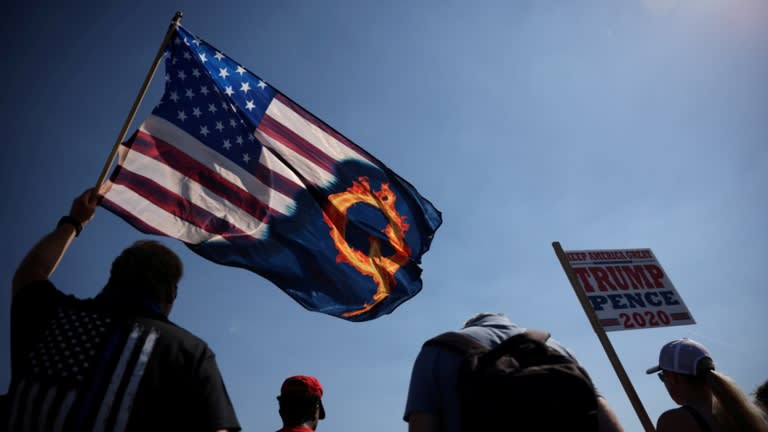 A Trump supporter holds an U.S. flag with a reference to QAnon during a campaign rally in Oregon in September.   © Reuters

There is also concern that followers of QAnon, a far-right conspiracy that Trump is saving the U.S. from dark liberal forces, could incite potentially violent protests should Trump lose the election.

QAnon began in 2017 with an anonymous online account calling itself "Q," which claimed to have access to top-secret intelligence. It has since evolved into a sprawling conspiracy theory, centered around the belief that Trump is fighting a cabal of Satan-worshipping pedophiles and deep-state actors that rule the world.

The theory has spread rapidly, aided in part by Trump's anti-establishment rhetoric. "I've heard these are people that love our country," he has said of its supporters. Related pages on Facebook now have roughly 4 million followers around the world.

QAnon has already had a major impact on the presidential race. Conspiracy theories are stunting support for Biden among Latino voters in Florida, a battleground state, Politico reports.

QAnon could also promote misinformation on voter fraud following the election, potentially leading to violent protests. Other far-right groups could protest the election result as well, said Michael Jensen, a senior researcher at the University of Maryland.