US election: Rage engulfs both Republicans and Democrats 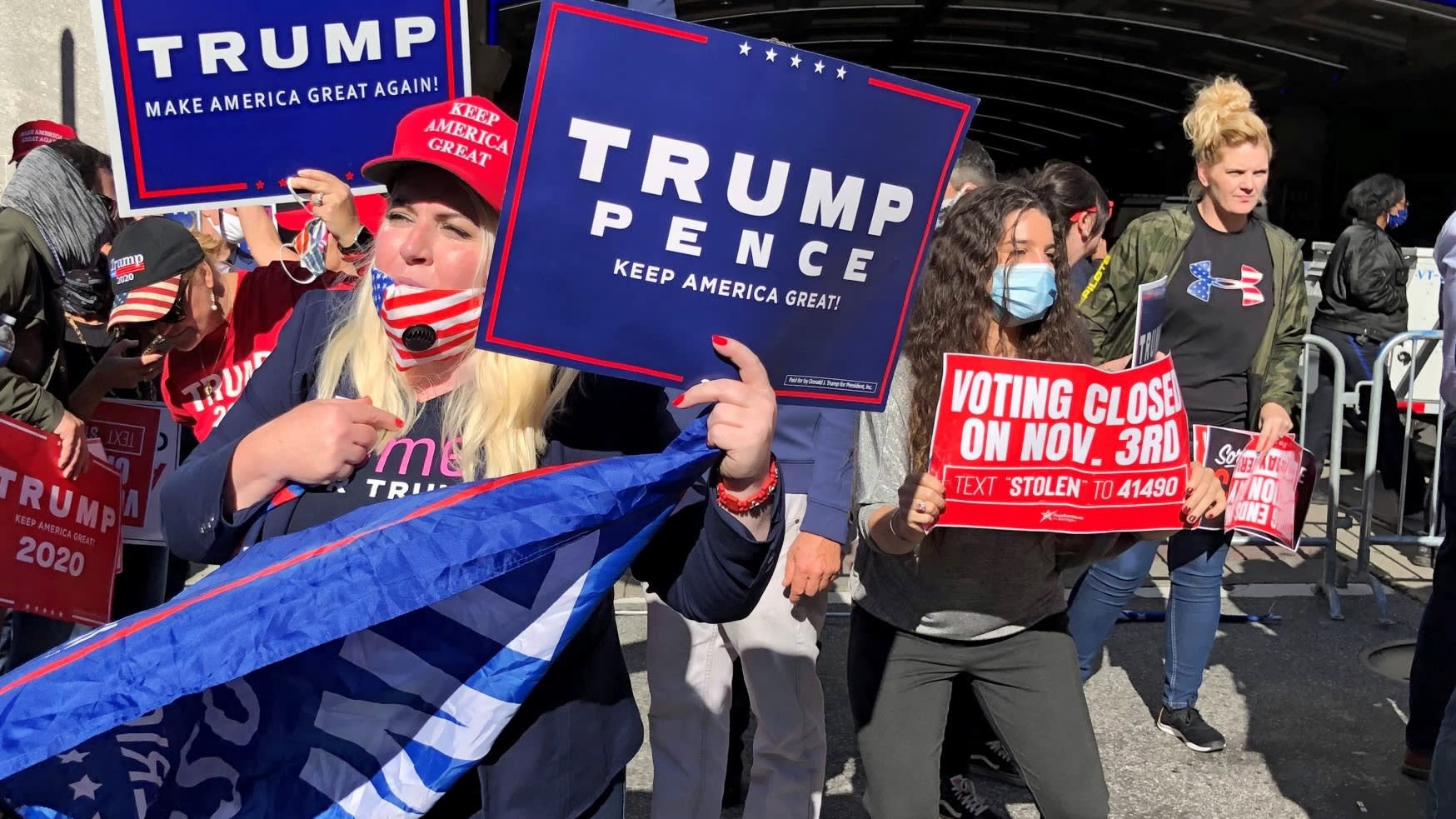 Yet supporters on both sides may have walked away disappointed, the Pew Research Center noted in a report Friday, as a divided government looked more likely.

The U.S. is a split nation. And the distrust between the two camps looks to be only intensifying.

In Philadelphia, the biggest city by population in the hotly contested battleground state of Pennsylvania, supporters of Trump and Biden gathered outside the Pennsylvania Convention Center, where votes were being counted Thursday.

"Trump is a dictator," said a 49-year-old Biden supporter. "There is no evidence that the ballots have been manipulated."

A Trump supporter nearby has a totally different view. "The election is over on November 3. Mail-in ballots are a breeding ground for fraud." Biden supporters call for the continuing of vote counts outside the Philadelphia Convention Center in Philadelphia, Pennsylvania on Nov. 6.   © AP

The two sides have parroted calls by the candidates they support. Trump supporters are seeking an immediate halt to the tabulation and those in the Biden camp are demanding that every ballot be counted. Their contrasting assertions and harsh exchanges have illuminated the deep division in America.

Even before the election, there were indications of just how fractured American society has become. Massive majorities of both Biden and Trump supporters said last month that if their candidate lost it would lead to long lasting harm to the nation, according to Pew. Additionally, 80% in both camps said they disagreed with the other camp over more than just politics, but core American values and goals as well.

Trump on Thursday singled out Philadelphia and Detroit as the "two of the most corrupt political places" in the country. He assailed at Philadelphia for not allowing his election watchers to the vote-counting site. When officials from the Trump camp started explaining progress on its litigation, Biden supporters started chanting "Count every vote."

At the Pennsylvania Convention Center, a fence set up to prevent a skirmish between protesters, which numbered about 300. But shouting continued.

"Even if Biden wins, he will not be able to erase the divide," said Aine Mishoinnaigh, a Biden supporter who took part in the protest.

While the groups outside the convention center only engaged in shouting matches, there have been troubling signs that tensions could spill over to violence. Philadelphia police arrested two armed men Thursday night for their alleged plot to attack the convention center.

Initially trailing Trump in vote count, Biden eventually caught up and is now leading the president in Pennsylvania by a thin margin. Winning the state would give the former vice president 20 delegates needed for the 270 mark.

Pennsylvania Secretary of State Kathy Boockvar said the state has finished counting most of the votes, but declined to say when the winner can be announced, citing a razor-thin margin. A Trump supporter demands that her vote be counted in Phoenix, Arizona, on Nov. 5. (Photo by Hiromi Sato)

On Thursday night, at a Maricopa County tabulation site in downtown Phoenix, Arizona, 34-year-old Candice Savino shouted "count the vote" through a megaphone, with a crowd of nearly 200 Trump supporters and others taking up the chant.

Though Trump's team is calling for the count to be stopped in close-fought states where Biden has caught up, the situation in Arizona is the opposite. Biden's lead in the state has narrowed, from 8.7 points on Tuesday night to just 1.4 points on Friday. Well over 100,000 ballots remain to be counted in Maricopa County, the state's largest, and many are expected to go for Trump.

"Trump can win if all our votes are counted properly," asserted 60-year-old Louis Pingtella.

Trump supporters have held large-scale protests around Phoenix periodically since Wednesday, with reports that some protesters have been armed. While most of these gatherings have been peaceful, one on Thursday night became tense when far-right conspiracy theorist Alex Jones made an appearance. County officials put up a fence outside the counting site to ensure the safety of poll workers.

Misinformation has been an issue. False rumors have spread about Arizona invalidating ballots that were filled out using Sharpie pens, though officials here have confirmed that tabulation machines can read them.

And in the run-up to the election, about 10 million automated calls were sent around the country urging voters to stay home, according to U.S. media. The FBI is investigating the robocall campaign.