He is not alone. More than 49,000 readers have taken an online poll that news site VnExpress posted on Sept. 18: "In your opinion, who will be elected US president?" Readers are given two choices -- Trump or Biden.

The results have been overwhelming. As of Monday, Trump has secured 79% of the total clicks, leaving Biden with 21%. Tuoi Tre, the online edition of a newspaper operated by the Ho Chi Minh Communist Youth Union, says Trump leads its survey at 78%. Thanh Nien, another Ho Chi Minh-based media outlet, says Trump is favored by more than 80% of its readers.

This trend is in line with that of Vietnamese who have emigrated to the U.S. and become citizens, though the margin is not nearly as wide. According to a national survey conducted from July 15 to Sept. 10, 48% of registered Vietnamese American voters chose Trump, while 36% supported Biden.

These Americans show a unique preference compared to their compatriots from the Philippines, India, Japan, South Korea and China. Among these groups, the support for Biden is at 52%; Trump fails to muster more than 34%.

In 2018, the U.S had more than 1.3 million immigrants who were born in Vietnam, accounting for 2.9% of all 44.7 million people residing in the United States who were not U.S. citizens at birth, according to the Migrant Policy Institute. Vietnamese Americans form one of the largest groups of Asian Americans. Indian Americans make up the largest such bloc, at 2.6 million, followed by the 2.2 million Chinese Americans and 2 million Filipino Americans.

"Trump's [tough] economy or trade policy toward Vietnam is also a good thing for Vietnam in the longer-term," the textile CEO said. "Vietnam will learn how to follow international standards and rules. Vietnam companies will have to improve themselves to meet demand from an open market economy." 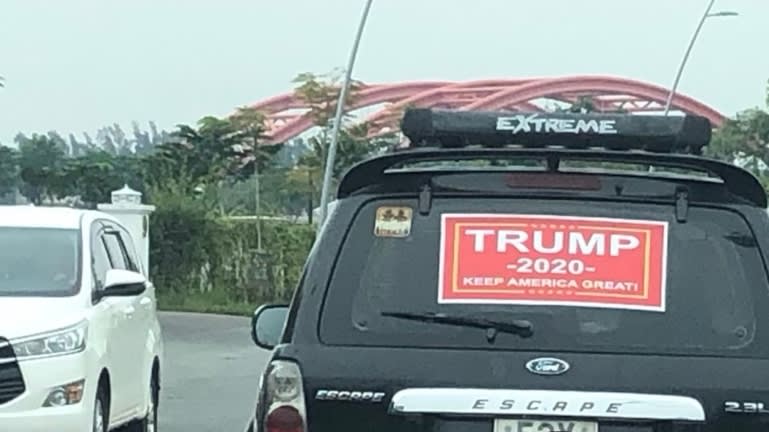 "If Trump wins," Vinh said, "his policies in the next four years will benefit Vietnam in the context of the South China Sea." Vietnam is among the Southeast Asian nations that have territorial rows with China in the strategic stretch of ocean.

"If Biden wins," Vinh went on, "it would be a disaster for us because the tradition of democratic presidents since the Vietnam War always showed an indulgence to China, especially under the Clinton and Obama administrations," Vinh said.

Do Nguyen Mai Khoi, an artist and human rights activist from Ho Chi Minh City, has another view.

"I am not a person who supports the Democratic Party," she said, "but at this time, I will do my best to kick the dangerous guy out of the White House. If not, we will experience a disaster of human rights, racism, environmental [degradation], immigration [problems], violence and the threat of wars."

Vietnamese are enthusiastically watching the horse race, keen to discern clues to American foreign policy over the next four years, especially in regard to Washington's stance on China.

"Many Vietnamese think the United States is important for Vietnam, rightly or wrongly, because it provides a counterweight to China in economic, military and geopolitical terms," said Ngo Vinh Long, professor of Asian History at the University of Maine. "But China is next door to Vietnam and hence outweighs the United States in many ways."

The professor added: "Vietnamese living in the United States, most have been voting for presidential and congressional candidates from the Republican Party ever since 1975, partly because of their purported anti-Communist views."

Many Vietnamese in the U.S. rely on Vietnamese-language news outlets for information, but Long says these organizations "spread all the propaganda lines of the Republican Party and the lies perpetuated by President Trump."

Similar information is also going in the other direction, Long added. "Vietnamese Americans," he said, "have influenced their relatives and friends back in Vietnam by repeating the slanted views they have obtained through emails and social media outlets such as Facebook."

Trump's popularity in Vietnam is a reflection of China's growing assertiveness in the South China Sea, said Le Hong Hiep, a fellow at the ISEAS-Yusof Ishak Institute, a think tank in Singapore.

"Trump's tough stance on China makes them think that if he stays on, it will be good for Vietnam," he said.

Carlyle A. Thayer, professor emeritus at UNSW Canberra, said Trump's popularity stems from his two visits to Vietnam as president, including the high-profile second summit with North Korean leader Kim Jong Un. "Trump has a higher media profile in Vietnam than Joe Biden," Thayer said. "Trump is outspoken against China on trade issues and the coronavirus."

In the long run, Vietnamese will have to walk a fine line between the U.S. and China as the Southeast Asian nation is under a one-party communist regime.

So far, Vietnam has benefited from the U.S.-China trade war; even some Chinese manufacturers have set up shop in Vietnam to circumvent American tariffs.

However, Vietnam's trade surplus has increased in recent years, drawing scrutiny from the Trump administration. "As long as Trump is president of the United States," Thayer said, "Vietnam faces possible sanctions by the Office of the United States Trade Representative."

This has Vietnam assuming a Switzerland-like posture, in a long run.

"Vietnam's foreign policy is directed at maintaining Vietnam's independence, self-reliance and strategic autonomy," Thayer said. "In other words, Vietnam seeks balance in its external relations as a matter of pragmatism and eschews taking sides."