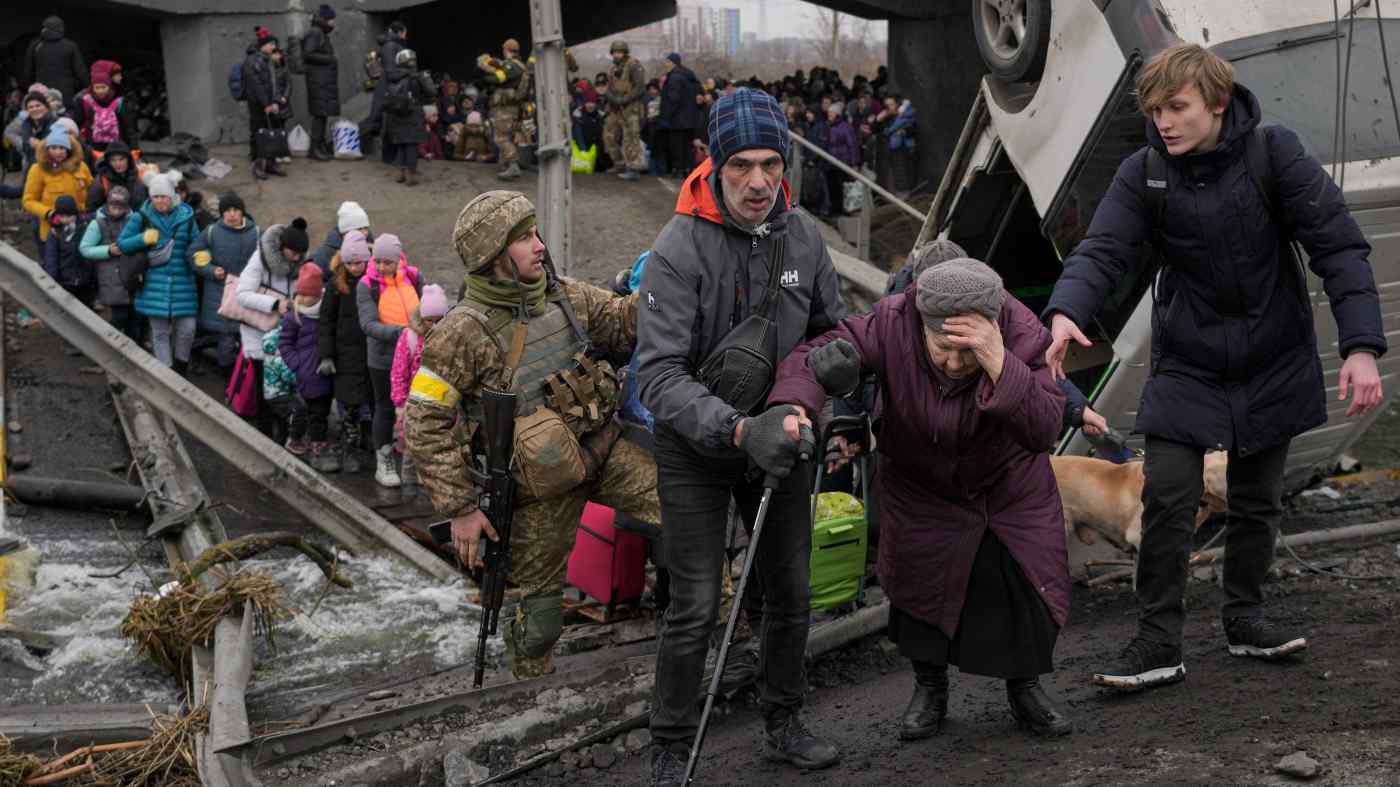 An elderly lady is assisted while crossing the Irpin river, under a bridge that was destroyed by a Russian airstrike, as civilians flee the town of Irpin, Ukraine, March 5.   © AP
March 6, 2022 17:32 JSTUpdated on March 6, 2022 22:25 JST | Russia & Caucasus
CopyCopied

LVIV, Ukraine (AP) -- Russian forces will observe a temporary cease-fire Sunday in two Ukrainian cities, an official in one of the country's pro-Russia separatist regions said after an agreement to allow civilians to evacuate collapsed a day earlier amid continued shelling and the flight of refugees to neighboring nations.

Eduard Basurin, the head of the military in separatist-held Donetsk, said safe passage corridors for residents of the besieged port city of Mariupol and the city of Volnovakha would reopen Sunday. He did not say for how long nor whether a cease-fire would accompany the evacuation.

Ukrainian officials confirmed that evacuations from Mariupol would take place starting from 12 p.m. local time. Pavlo Kyrylenko, head of the Donetsk regional military administration, said a ceasefire would be in effect between 10 a.m. and 9 p.m.

More than 1.5 million refugees have crossed from Ukraine into neighboring countries since Russia invaded, the head of the United Nations' refugee agency reported Sunday.

A promised cease-fire in Mariupol failed amid scenes of terror Saturday. Ukrainian officials said the evacuation was aborted because the city of 430,000 remained under attack.

Russian President Vladimir Putin blamed Ukraine for the failure and warned that the country's ongoing resistance since Russia invaded its ex-Soviet neighbor on Feb. 24 is putting the country's future as a nation in jeopardy.

"If they continue to do what they are doing, they are calling into question the future of Ukrainian statehood," the Russian leader said Saturday. "And if this happens, it will be entirely on their conscience."

Putin also hit out at Western sanctions that have crippled Russia's economy and sent the value of its currency tumbling. likening to "declaring war."

With the Kremlin's rhetoric growing fiercer and a reprieve from fighting dissolving, Russian troops continued to shell encircled cities.

By nighttime Saturday, Russian forces had intensified their shelling of Mariupol, while dropping powerful bombs on residential areas of Chernihiv, a city north of Kyiv, Ukrainian officials said.

Sunday's evacuations were announced along with a third round of talks between Russia and Ukraine. Davyd Arakhamia, a member of the Ukrainian delegation, said the meeting would take place Monday. He gave no additional details, including the location of the talks.

Previous meetings held in Belarus had led to a cease-fire agreement to create humanitarian corridors for the evacuation of children, women and older people from Ukrainian cities, where pharmacies have run bare, hundreds of thousands face food and water shortages, and the injured have been succumbing to their wounds.

Mariupol Mayor Vadym Boychenko said thousands of residents had gathered for safe passage out of the city on Saturday when shelling began and the evacuation was stopped. Later in the day, he said the attack had escalated.

"The city is in a very, very difficult state of siege," Boychenko told Ukrainian TV. "Relentless shelling of residential blocks is ongoing, airplanes have been dropping bombs on residential areas. The Russian occupants are using heavy artillery, including Grad multiple rocket launchers."

Plans for Sunday's evacuation called for the route from Mariupol to extend to Zaporizhzhia, a city 227 kilometers (141 miles) away.

Russia has made significant advances in southern Ukraine as it seeks block access to the Sea of Avrov. Capturing Mariupol could allow Moscow to establish a land corridor to Crimea, which Russia annexed from Ukraine in 2014 in a move that most other countries considered illegal.

Ukrainian President Volodymyr Zelenskyy urged Ukrainians in cities taken over by the Russians to resist.

"It is a special kind of heroism -- to protest when your city is occupied," Zelenskyy said Saturday night in his latest video address to the nation. "Ukrainians in all of our cities that the enemy has entered, go on the offensive! You should take to the streets! You should fight!"

Thousands of Ukrainians accepted the president's request and demonstrated on Saturday. Some climbed Russia's military vehicles and waved Ukraine's yellow and blue flag.

In the southern port city of Kherson, a city of 300,000 where Russian troops took control this week, the soldiers were reported to have fired warning shots to disperse the crowd, but the protesters were unfazed.

Russian forces also had encircled Kharkiv, Mykolaiv, Chernihiv and Sumy, as of Saturday, while Ukrainian forces had managed to keep control of key cities in central and southeastern Ukraine, Zelenskyy said.

The head of the Chernihiv region said Russia dropped powerful bombs on residential areas of the city, which has a population of 290,000. Vyacheslav Chaus posted a photo online of what he said was an undetonated FAB-500, a 1,100-pound (500-kilogram) bomb.

"Usually this weapon is used against military-industrial facilities and fortified structures," Chaus said.

The West has broadly backed Ukraine, offering aid and weapons and slapping Russia with vast sanctions. But the fight itself has been left to Ukrainians, who have expressed a mixture of courageous resolve and despondency.

"Ukraine is bleeding," Foreign Minister Dmytro Kuleba said in a video released Saturday, "but Ukraine has not fallen."

Zelenskyy pleaded with U.S. lawmakers Saturday for additional help, specifically fighter planes to help secure the skies over Ukraine, even as he insisted Russia was being defeated.

"We're inflicting losses on the occupants they could not see in their worst nightmare," Zelenskyy said.

Russian troops advanced on a third nuclear power plant, having already taken control of one of the four operating in the country and the closed plant in Chernobyl, Zelenskyy told the American lawmakers Saturday.

The U.S. Congress is considering a request for $10 billion in emergency funding for humanitarian aid and security needs. The U.N. said it would increase its humanitarian operations both inside and outside Ukraine, and the Security Council scheduled a meeting for Monday on the worsening situation.

The death toll of the conflict has been difficult to measure. The U.N. human rights office said at least 351 civilians have been confirmed killed since the Feb. 24 invasion, but the true number is probably much higher.

"If you wish to depart Russia, you should make arrangements on your own as soon as possible," the updated advisory stated. "If you plan to stay in Russia, understand the U.S. Embassy has severe limitations on its ability to assist U.S. citizens, and conditions, including transportation options, may change suddenly."

The department already has advised Americans not to travel to Russia. That warning cites "the unprovoked and unjustified attack by Russian military forces in Ukraine" and "the potential for harassment against U.S. citizens by Russian government security officials," among other things.

Ukraine's military is vastly outmatched by Russia's, but its professional and volunteer forces have fought back with fierce tenacity. Even in cities that have fallen, there were signs of resistance.

Onlookers in Chernihiv cheered as they watched a Russian military plane fall from the sky and crash, according to video released by the Ukrainian government. In Kherson, hundreds of protesters waved blue and yellow Ukrainian flags and shouted, "Go home."