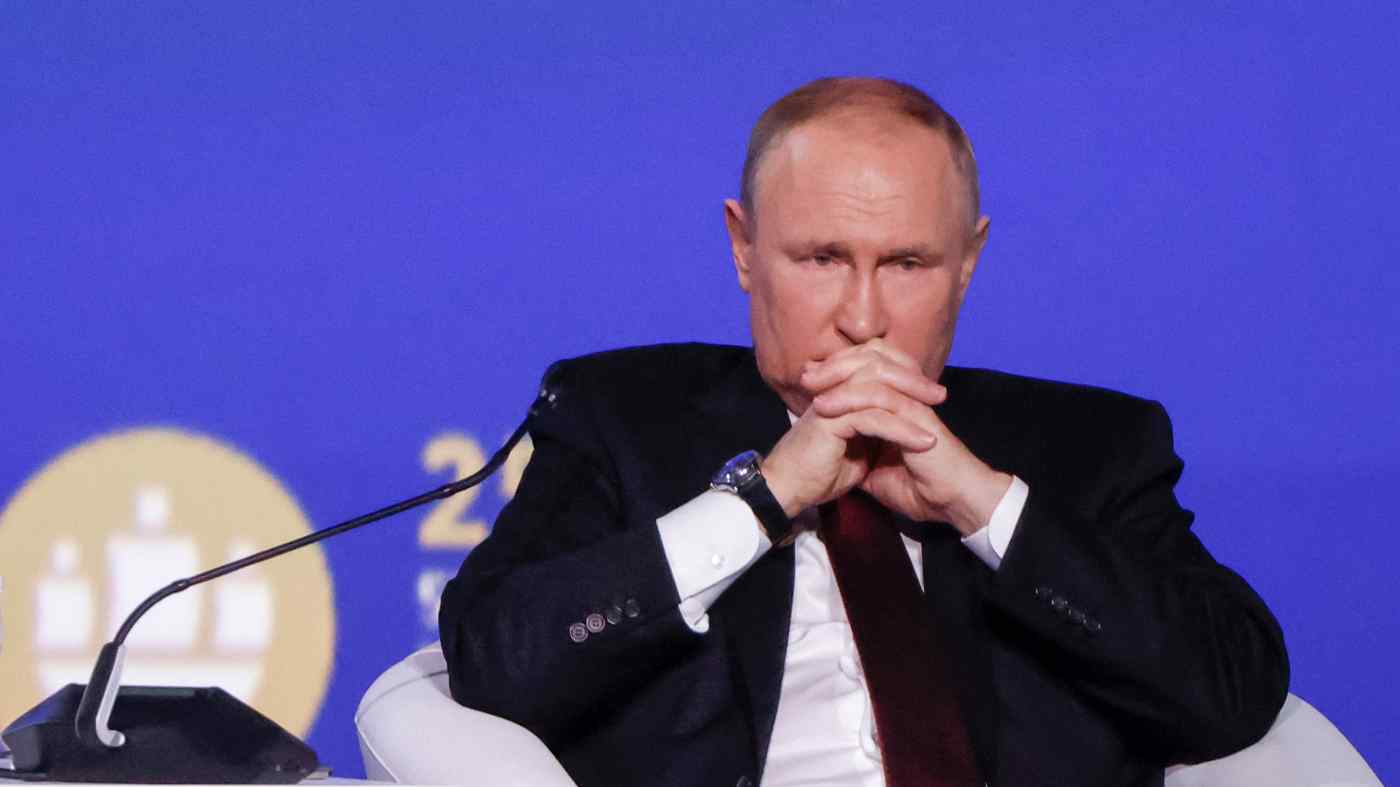 (Reuters) -- President Vladimir Putin asserted Russia's strength and resilience on Friday against a Western world that he accused of colonial arrogance and trying to crush his country with an economic "blitzkrieg" of sanctions.

Addressing the St. Petersburg International Economic Forum, a showcase event being held this year with almost no Western participation, he returned time and again to the theme of Russia's sovereignty in a new global order:

"We are strong people and can cope with any challenge. Like our ancestors, we will solve any problem, the entire thousand-year history of our country speaks of this."

Putin drew applause when he reaffirmed his determination to continue the "special military operation" in Ukraine that has unleashed a barrage of Western economic sanctions.

He said the main aim was to defend "our" people in the largely Russian-speaking Donbas region of eastern Ukraine -- a justification that Kyiv and the West dismiss as a baseless pretext for a campaign that has already cost thousands of lives and led to the occupation of parts of Ukraine far beyond the Donbas.

In his 73-minute speech, Putin said Russian soldiers were also fighting to defend Russia's own "rights to secure development."

"Against a backdrop of increasing risks for us and threats, Russia's decision to conduct a special military operation was forced -- difficult, of course, but forced and necessary."

A recorded video address by Chinese President Xi Jinping praising Chinese-Russian cooperation underlined Putin's contention that an era of American domination is at an end.

Putin said the U.S. considered itself "God's emissary on Earth" and that Russia was taking its place in a new world order whose rules would be set by "strong and sovereign states."

He called the campaign in Ukraine the action of a "sovereign country that has the right to defend its security" and accused the West of "active military appropriation of Ukrainian territory."

But he appeared to acknowledge the scale of destruction being wrought, while absolving Russian forces.

In a two-hour question-and-answer session after his speech, he evoked Stalingrad, the Soviet city razed by attritional urban warfare in World War II, now renamed Volgograd.

"We must not turn those cities and towns that we liberate into a semblance of Stalingrad," he said. "This is a natural thing that our military thinks about when organizing hostilities."

Ukraine says Russian forces are responsible for thousands of civilian deaths, the obliteration of towns such as Mariupol, and the displacement of a third of its peacetime population.

Russia denies attacking civilian targets and says allegations that it has perpetrated war crimes are based on Ukrainian and Western fabrications.

Shortly before Putin was due to begin speaking, the Kremlin said a "denial of service" cyber attack had disabled the forum's accreditation and admission systems, forcing him to delay the scheduled start by an hour.

Putin dismissed suggestions that Russia was responsible for a surge in global prices of basic foodstuffs with the phrase that a failure to export 5 or 6 tons of Ukrainian wheat and six or seven tonnes of corn "doesn't change the weather."

He said Russia was ready to guarantee the transit of ships exporting Ukrainian grain across the Black Sea but that Ukraine had five or six alternative routes -- through Belarus, Poland or Romania.

Ukraine has been using much more cumbersome road, rail and river routes to try to get around the closure notably of Odesa, its main deep-sea port, where it fears a Russian attack.

But their capacity is at best a third of the more than 6 million tons a month of grain and oilseeds that were shipped from Odesa in the past.