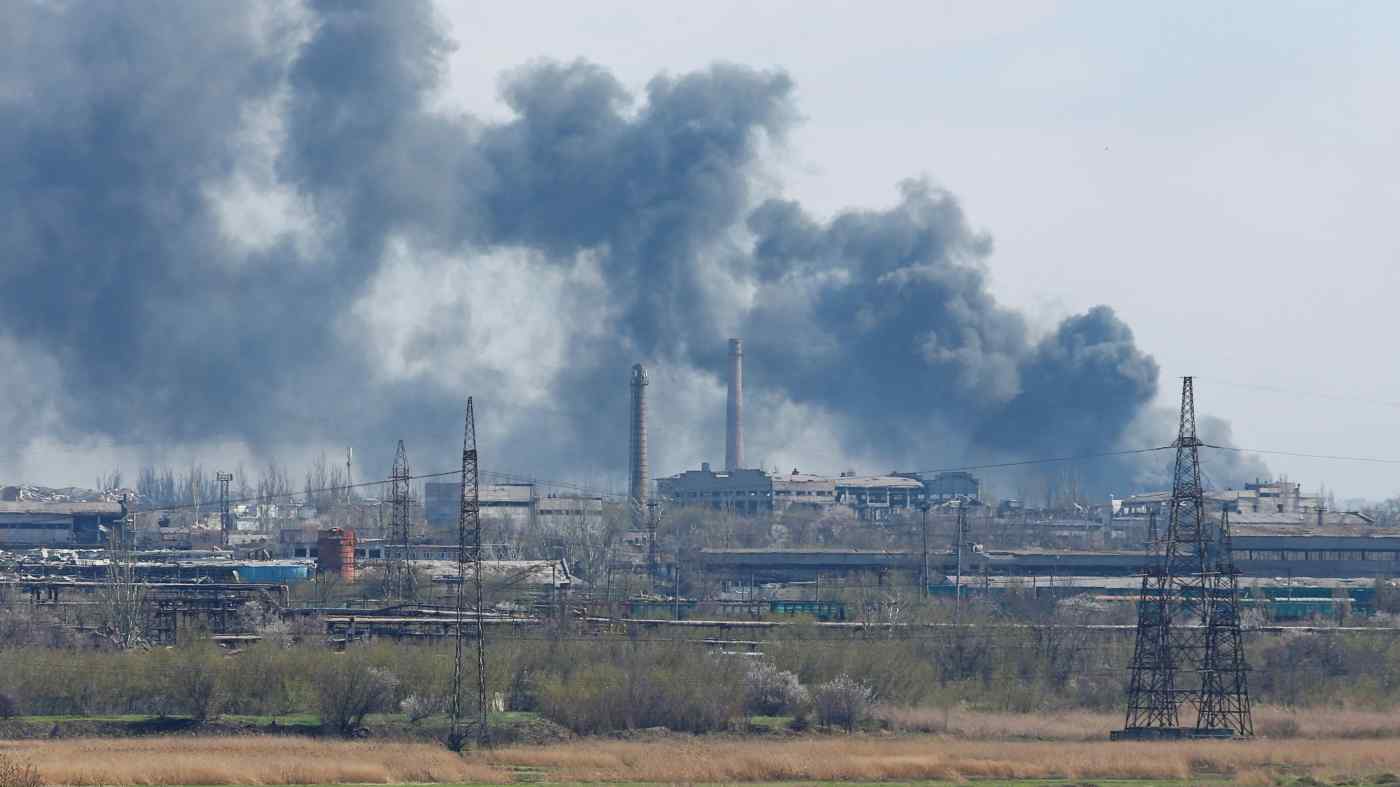 Ukrainian fighters are holed up in the vast Azovstal plant in Mariupol that Russia had initially planned to storm.   © Reuters
April 21, 2022 16:55 JST | Russia & Caucasus
CopyCopied

(Reuters) -- President Vladimir Putin called off plans for the Russian military to storm the sprawling Azovstal steel plant in the Ukrainian port city of Mariupol and said on Thursday he wanted Ukrainian forces there to be hermetically sealed in instead.

The full capture of Mariupol, which has been besieged by Russian forces for weeks, is a central part of Moscow's plans to cut Ukraine off from the Sea of Azov and forge a land bridge connecting Russian-annexed Crimea to Russia.

Ramzan Kadyrov, the leader of Russia's Chechnya region whose forces have been fighting in Mariupol, had suggested that the vast Azovstal facility, which covers more than 11 square kilometres (4.25 square miles), would be stormed after Ukrainian forces holed up inside ignored Russian offers to surrender.

But Putin, in a Kremlin meeting with Sergei Shoigu, his defence minister, gave the order to call off the plan to storm it, saying it was better to save the lives of Russian soldiers and officers and to sit back and wait while Ukrainian forces ran out of supplies.

"I consider the proposed storming of the industrial zone unnecessary," Putin told Shoigu in a televised meeting at the Kremlin. "I order you to cancel it.

There is no need to climb into these catacombs and crawl underground through these industrial facilities," he told Shoigu.

"Block off this industrial area so that a fly cannot not pass through."

Putin called on the remaining Ukrainian fighters in Azovstal to lay down their arms, saying Russia would treat them with respect and provide medical assistance to those injured.

Shoigu had earlier told Putin that more than 2,000 Ukrainian fighters were still holed up in the plant and that it might take three or four days to take control of the facility.

Shoigu told Putin that Mariupol had symbolic importance for Russia because it was what he called the de facto headquarters of the far-right nationalist Azov battalion which Moscow has promised to destroy.

The Azovstal iron and steel works, one of Europe's biggest metallurgical plants, lies in an industrial area that looks out to the Sea of Azov. It houses a multitude of buildings, blast furnaces and rail tracks and has extensive underground facilities too.

Putin congratulated his defense minister for what he called the successful military operation to "liberate Mariupol" and asked him to pass on his thanks to Russian troops.

"I want them all to know: in our minds, in the minds of all of Russia, they are heroes," Putin said.

Russia is due to celebrate its annual victory day holiday on May 9, when it commemorates the World War Two Soviet victory over Nazi Germany and is likely to hold up the full capture of Mariupol when it happens as proof that it is making gains in Ukraine despite heavy losses.

Shoigu told Putin that Russia had killed more than 4,000 Ukrainian troops in its campaign to take Mariupol and that 1,478 had given themselves up. He said Russia had evacuated 142,711 civilians from the city too.

Putin asked Shoigu for his ministry to come up with new proposals on supporting Russian troops fighting in Ukraine.

Russia sent tens of thousands of troops into Ukraine on Feb. 24 in what it called a special military operation to degrade its southern neighbor's military capabilities and root out people it called dangerous nationalists.

Ukrainian forces have mounted stiff resistance and the West has imposed sweeping sanctions on Moscow in an effort to force it to withdraw its forces.