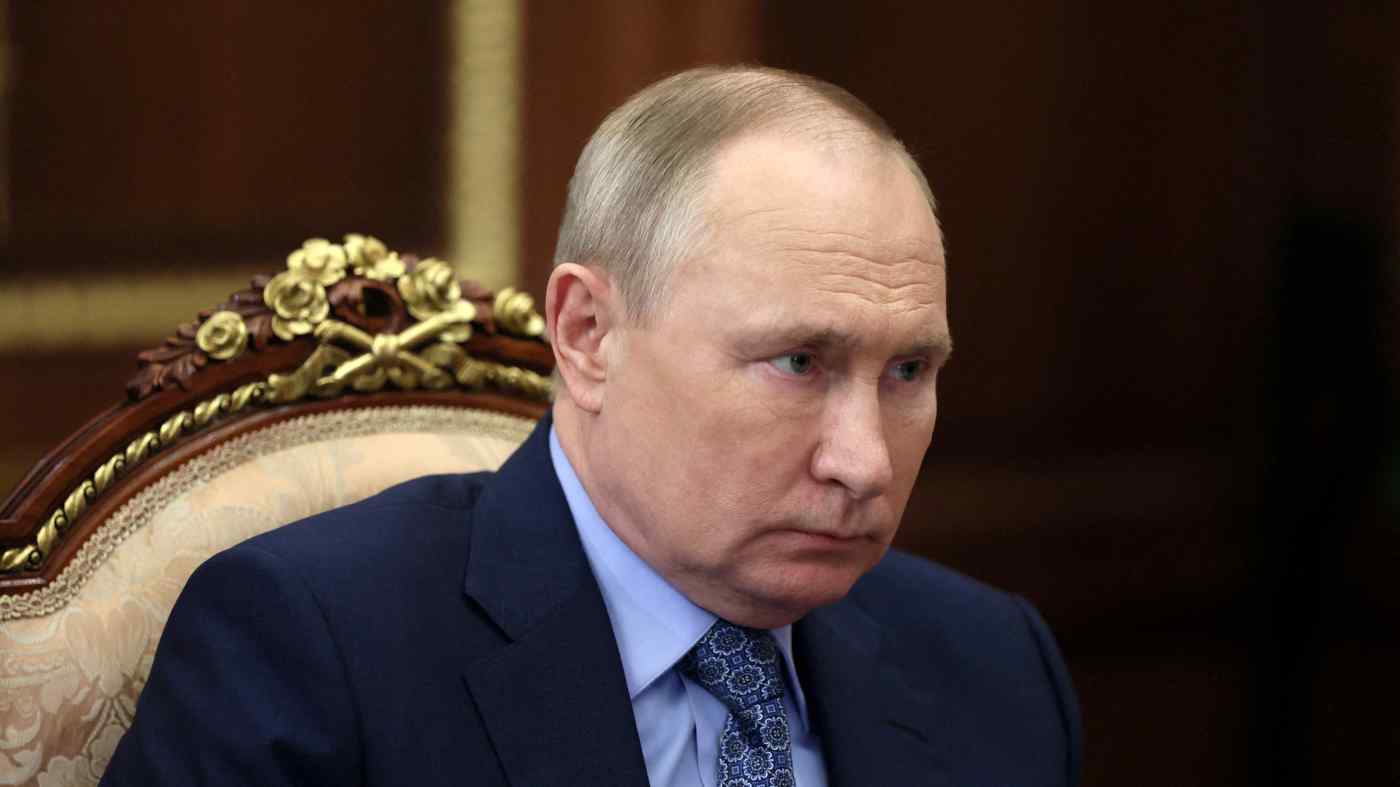 The Biden administration hopes publishing the intelligence findings that Russian President Vladimir Putin is being misled will lead him to reconsider his options in Ukraine.   © Reuters
March 31, 2022 10:38 JST | Russia & Caucasus
CopyCopied

WASHINGTON (AP) -- U.S. intelligence officials have determined that Russian President Vladimir Putin is being misinformed by advisers about his military's poor performance in Ukraine, according to the White House. The advisers are scared to tell him the truth, the intel says.

The findings, recently declassified, indicate that Putin is aware of the situation on information coming to him and there now is persistent tension between him and senior Russian military officials.

The U.S. believes Putin is being misled not only about his military's performance but also "how the Russian economy is being crippled by sanctions because, again, his senior advisers are too afraid to tell him the truth," White House communications director Kate Bedingfield said Wednesday.

Earlier, President Joe Biden said in an exchange with reporters that he could not comment on the intelligence.

The administration is hopeful that divulging the finding could help prod Putin to reconsider his options in Ukraine, according to a U.S. official. The official was not authorized to comment and spoke on the condition of anonymity. The war has ground to a bloody stalemate in much of the country, with heavy casualties and Russian troop morale sinking as Ukrainian forces and volunteers put up an unexpectedly stout defense.

But the publicity could also risk further isolating Putin, who U.S. officials have said seems at least in part driven by a desire to win back Russian prestige lost by the fall of the Soviet Union.

"What it does is underscore that this has been a strategic blunder for Russia," Bedingfield said of the intelligence finding. "But I'm not going to characterize how ... Vladimir Putin might be thinking about this."

Meanwhile, Biden told Ukrainian President Volodymyr Zelenskyy during a 55 minute call that an additional $500 million in direct aid for Ukraine was on its way. It's the latest burst in American assistance as the Russian invasion grinds on.

Asked about the latest intelligence, Secretary of State Antony Blinken suggested that a dynamic within the Kremlin exists where advisers are unwilling to speak to Putin with candor.

"One of the Achilles' heels of autocracies is that you don't have people in those systems that speak truth to power or have the ability to speak truth to power, and I think that's what we're seeing in Russia," Blinken told reporters during a stop in Algeria on Wednesday.

The unidentified official did not detail underlying evidence for how U.S. intelligence made its determination.

The intelligence community has concluded that Putin was unaware that his military had been using and losing conscripts in Ukraine. They also have determined he is not fully aware of the extent to which the Russian economy is being damaged by economic sanctions imposed by the U.S. and allies.

The findings demonstrate a "clear breakdown in the flow of accurate information" to Putin, and show that Putin's senior advisers are "afraid to tell him the truth," the official said.

Biden notified Zelenskyy about the latest tranche of assistance during a call in which the leaders also reviewed security aid already delivered to Ukraine and the effects that weaponry has had on the war, according to the White House.

Zelesnkyy has pressed the Biden administration and other Western allies to provide Ukraine with military jets, something that the U.S. and other NATO countries have thus far been unwilling to accommodate out of concern it could lead to Russia broadening the war beyond Ukraine's borders.

Prior to Wednesday's announcement of $500 million in aid, the Biden administration had sent Ukraine about $2 billion in humanitarian and security assistance since the start of the war last month.

Congress approved $13.6 billion that Congress approved earlier this month as part of a broader spending bill. Bedingfield said the latest round of financial assistance could be used by the Ukrainian government "to bolster its economy and pay for budgetary expenses" including government salaries and maintaining services.

Ukraine's presidential website says Zelenskyy told Biden: "We need peace, and it will be achieved only when we have a strong position on the battlefield. Our morale is firm, there is enough determination, but we need your immediate support."

Zelenskyy in a Twitter posting said that he also spoke to Biden about new sanctions against Russia. Bedingfield said the administration is looking at options to expand and deepen current sanctions.

The new intelligence came after the White House on Tuesday expressed skepticism about Russia's public announcement that it would dial back operations near Kyiv in an effort to increase trust in ongoing talks between Ukrainian and Russian officials in Turkey.

The Pentagon said Wednesday that over the past 24 hours it had seen some Russian troops in the areas around Kyiv moving north toward or into Belarus.

Pentagon press secretary John Kirby said in interviews with CNN and Fox Business that the U.S. does not view this as a withdrawal but as an attempt by Russia to resupply, refit and then reposition the troops.

Putin has long been seen outside Russia as insular and surrounded by officials who don't always tell him the truth. U.S. officials have said publicly they believe that limited flow of information -- possibly exacerbated by Putin's heightened isolation during the COVID-19 pandemic -- may have given the Russian president unrealistic views of how quickly he could overrun Ukraine.

The Biden administration before the war launched an unprecedented effort to publicize what it believed were Putin's invasion plans, drawing on intelligence findings. While Russia still invaded, the White House was widely credited with drawing attention to Ukraine and pushing initially reluctant allies to back tough sanctions that have hammered the Russian economy.

But underscoring the limits of intelligence, the U.S. also underestimated Ukraine's will to fight before the invasion, said Lt. Gen. Scott Berrier, head of the Defense Intelligence Agency, in recent testimony before Congress.