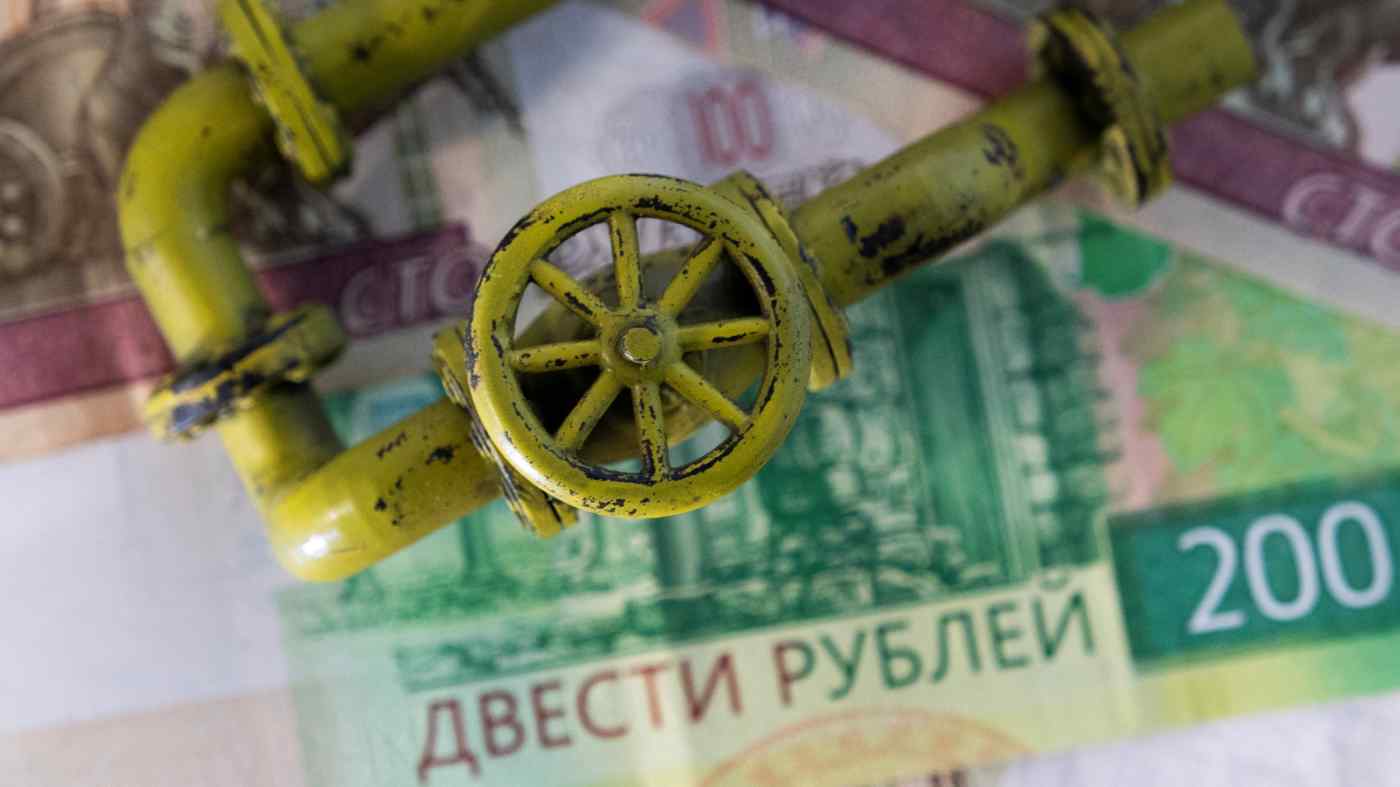 A model of a natural gas pipeline is placed on ruble banknotes in this illustration taken on March 23. Russia is seeking payment in rubles for gas sold to "unfriendly" countries.   © Reuters
March 24, 2022 11:23 JST | Russia & Caucasus
CopyCopied

European nations and the U.S. have imposed heavy sanctions on Russia since Moscow sent troops into Ukraine on Feb. 24. But Europe depends heavily on Russian gas for heating and power generation, and the European Union is split on whether to sanction Russia's energy sector.

Putin's message was clear: If you want our gas, buy our currency. It remained unclear whether Russia has the power to unilaterally change existing contracts agreed upon in euros.

The ruble briefly leapt after the shock announcement to a three-week high past 95 against the dollar. It pared gains but stayed well below 100, closing at 97.7 against the dollar, down more than 22% since Feb. 24.

Russian gas accounts for some 40% of Europe's total consumption. EU gas imports from Russia this year have fluctuated between 200 million to 800 million euros ($880 million) a day.

"Russia will continue, of course, to supply natural gas in accordance with volumes and prices... fixed in previously concluded contracts," Putin said at a televised meeting with government ministers.

"The changes will only affect the currency of payment, which will be changed to Russian rubles," he said.

"This would constitute a breach to payment rules included in the current contracts," said a senior Polish government source, adding Poland has no intention of signing new contracts with Gazprom after their existing deal expires at the end of this year.

A spokesperson for Dutch gas supplier Eneco, which buys 15% of its gas from Russian gas giant Gazprom's German subsidiary Wingas, said it had a long-term contract denominated in euros.

"I can't imagine we will agree to change the terms of that."

According to Gazprom, 58% of its sales of natural gas to Europe and other countries as of Jan. 27 were settled in euros. U.S. dollars accounted for about 39% of gross sales and sterling around 3%. Commodities traded worldwide are largely transacted in the U.S. dollar or the euro, which make up roughly 80% of worldwide currency reserves.

"There is no danger for the (gas) supply, we have checked, there is a financial counterparty in Bulgaria that can realize the transaction also in rubles," Energy Minister Alexander Nikolov told reporters in Sofia. "We expect all kinds of actions on the verge of the unusual but this scenario has been discussed, so there is no risk for the payments under the existing contract."

"It is unclear how easy it would be for European clients to switch their payments to rubles given the scale of these purchases," said Leon Izbicki, associate at consultancy Energy Aspects. He said, however, that Russia's central bank could provide additional liquidity to foreign exchange markets that would enable European clients and banks to source needed rubles.

Moscow calls its actions in Ukraine a "special military operation." Ukraine and Western allies call this a baseless pretext.

Putin said the government and central bank had one week to come up with a solution on moving operations into the Russian currency and that Gazprom would be ordered to make the corresponding changes to contracts.

In gas markets on Wednesday, eastbound gas flows via the Yamal-Europe pipeline from Germany to Poland declined sharply, data from the Gascade pipeline operator showed.

"The measures taken by Russia may also be interpreted as provocative and may increase the possibility that Western nations tighten sanctions on Russian energy," said Liam Peach, emerging Europe economist at Capital Economics.

The European Commission has said it plans to cut EU dependency on Russian gas by two-thirds this year and end its reliance on Russian supplies "well before 2030."

But unlike the U.S. and Britain, EU states have not sanctioned Russia's energy sector. The Commission, the 27-country EU's executive, did not respond to a request for comment.

"In their contracts it's usually specified in what currency it has to be paid, so it's not something you can change just like that," Rutte said during a debate with parliament.

Russia has drawn up a list of "unfriendly" countries corresponding to those that have imposed sanctions. Deals with companies and individuals from those countries must be approved by a government commission.

The countries include the U.S., EU member states, Britain, Japan, Canada, Norway, Singapore, South Korea, Switzerland and Ukraine. Some, including the U.S. and Norway, do not purchase Russian gas.

The U.S. is consulting with allies on the issue and each country will make its own decision, a White House official told Reuters. The U.S. has already banned imports of Russian energy.