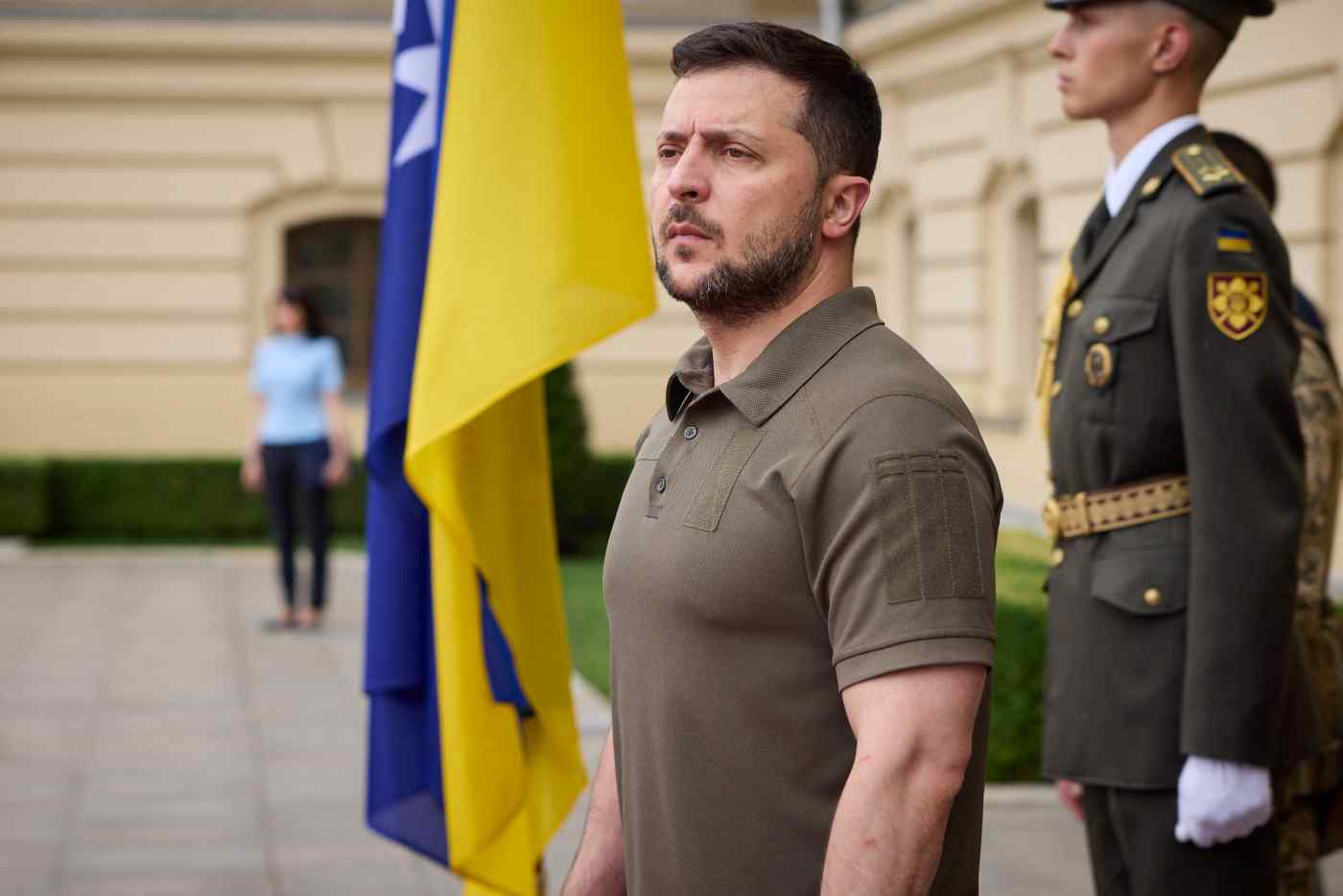 KYIV (Reuters) -- Ukraine's President Volodymyr Zelenskyy on Sunday acknowledged Kyiv's forces had withdrawn from Lysychansk in the eastern Donbas region after a grinding Russian assault, but vowed to regain control over the area with the help of long-range Western weapons.

Russia said its capture of the city of Lysychansk less than a week after taking neighboring Sievierdonetsk gave it full control of the eastern Luhansk region -- a political win that meets a key Kremlin war goal. The battlefield focus now shifts to the neighboring Donetsk region, where Kyiv still controls swaths of territory.

"If the commanders of our army withdraw people from certain points at the front, where the enemy has the greatest advantage in firepower, and this also applies to Lysychansk, it means only one thing," Zelenskyy said in his nightly video address.

"That we will return thanks to our tactics, thanks to the increase in the supply of modern weapons."

Zelenskyy said Russia was concentrating its firepower on the Donbas front, but Ukraine would hit back with long-range weapons such as the U.S.-supplied HIMARS rocket launchers.

"The fact that we protect the lives of our soldiers, our people, plays an equally important role. We will rebuild the walls, we will win back the land, and people must be protected above all else," Zelenskyy said.

Since abandoning an assault on the capital Kyiv, Russia has concentrated its military operation on the industrial Donbas heartland that comprises the Luhansk and Donetsk regions, where Moscow-backed separatist proxies have been fighting Ukraine since 2014.

Russia says it is capturing the Luhansk region in order to give it to the self-proclaimed Russian-backed Luhansk People's Republic, whose independence it recognized on the eve of the war.

Russian Defense Minister Sergei Shoigu informed President Vladimir Putin that Luhansk had been "liberated," the defense ministry said after Russia earlier said its forces had captured villages around Lysychansk and encircled the city.

Ukraine's military command said its forces had been forced to retreat from the city.

"The continuation of the defense of the city would lead to fatal consequences. In order to preserve the lives of Ukrainian defenders, a decision was made to withdraw," it said in a statement on social media.

West of Lysychansk in the Donetsk region, at least six people were killed when the Ukrainian city of Sloviansk was hit by powerful shelling from multiple rocket launchers on Sunday, local officials said.

Thousands of civilians have been killed and cities leveled since Russia invaded on Feb. 24, with Kyiv accusing Moscow of deliberately targeting civilians. Moscow denies this.

Russia says what it calls a "special military operation" in Ukraine aims to protect Russian speakers from nationalists. Ukraine and its Western allies say this is a baseless pretext for flagrant aggression that aims to seize territory.

While Russia would try to frame its advance in Luhansk as a significant moment in the war, it came at a high cost to Russia's military, said Neil Melvin of the London-based think tank RUSI.

"Ukraine's position was never that they could defend all of this. What they've been trying to do is to slow down the Russian assault and cause maximum damage, while they build up for a counteroffensive," he said.

Russia's defense ministry also said on Sunday it had struck the military infrastructure of Kharkiv, Ukraine's second-largest city in the northeast, where a Reuters reporter said Ukrainian forces had been building fortifications after nightly shelling.

Outside a school in Kharkiv, some residents threw debris into a large crater created by an early morning rocket strike while others got help repairing damaged houses.

"The wife was lucky that she woke up early in the morning because the roof fell exactly where she had been sleeping," one resident, Oleksii Mihulin, told Reuters.

About 70 km from Kharkiv on the Russian side of the border, Russia also reported explosions on Sunday in Belgorod, which it said killed at least three people and destroyed homes.

"The sound was so strong that I jumped up, I woke up, got very scared and started screaming," a Belgorod resident told Reuters, adding the blasts occurred around 3 a.m. (0000 GMT).

Moscow has accused Kyiv of numerous attacks on Belgorod and other areas bordering Ukraine. Kyiv has never claimed responsibility for any of these incidents.

Ukraine said its air force had flown some 15 sorties "in virtually all directions of hostilities", destroying equipment and two ammunition depots.

In the Russian-occupied southern Ukrainian city of Melitopol, Ukrainian forces hit a military logistics base with more than 30 strikes on Sunday, the city's exiled mayor Ivan Fedorov said. A Russian-installed official confirmed that strikes had hit the city.

Reuters could not independently verify the battlefield reports.

Ukraine has repeatedly appealed for an acceleration in weapons supplies from the West, saying its forces are heavily outgunned.

Speaking on a visit to Kyiv, Australian Prime Minister Anthony Albanese said his government would provide Ukraine with additional armored vehicles, as well as tightening sanctions against Russia.

German Chancellor Olaf Scholz told broadcaster ARD that Germany was discussing with its allies security guarantees for Ukraine after the war, though it was clear these would "not be the same as if someone were a member of NATO."