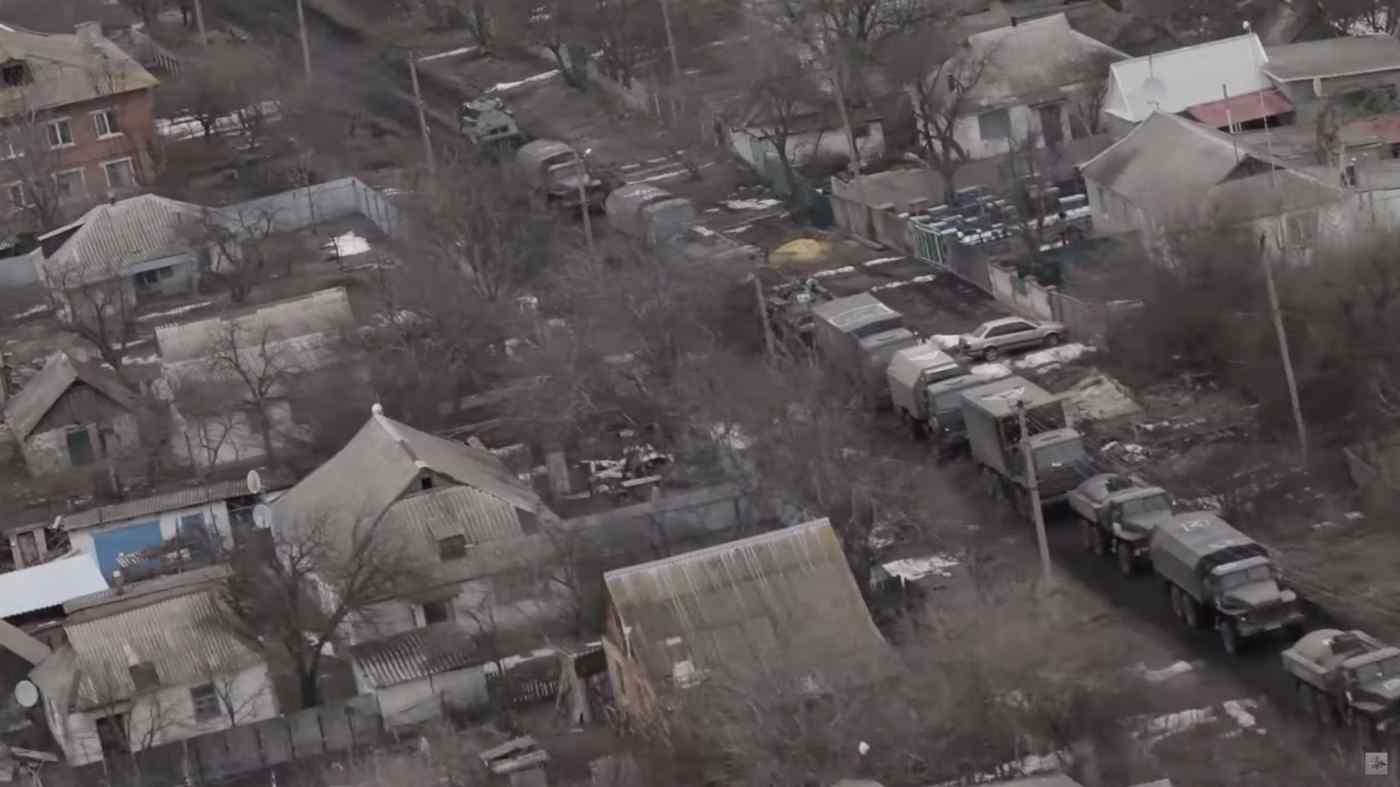 The West worries that Russian forces are growing far more violent as their invasion drags on. This view is from a Russian Army aviation helicopter taking part in the invasion. (Russian Defense Ministry/Handout via Reuters)
March 2, 2022 22:04 JSTUpdated on March 3, 2022 03:56 JST | Russia & Caucasus
CopyCopied

WASHINGTON/KYIV/KHARKIV (Reuters) -- Ukrainians said on Wednesday they were battling on in the port of Kherson, the first sizable city Russia claimed to have seized, while airstrikes and bombardment caused further devastation in other cities, especially Kharkiv in the east.

Russia's week-old invasion has yet to achieve its aim of overthrowing Ukraine's government but has sent more than 870,000 people fleeing to neighboring countries and jolted the global economy as governments and companies line up to isolate Moscow.

The United Nations General Assembly voted overwhelmingly on Wednesday to deplore the invasion "in the strongest terms." It demanded that Russia withdraw its forces in a resolution backed by 141 of the assembly's 193 members.

Bombing of Kharkiv, a city of 1.5 million people, has left its center a wasteland of ruined buildings and debris.

"The Russian 'liberators' have come," one Ukrainian volunteer lamented sarcastically, as he and three others strained to carry the dead body of a man wrapped in a bedsheet out of the ruins on a main square.

At least 25 people have been killed by shelling and airstrikes in Kharkiv in the past 24 hours, authorities said. After an air strike on Wednesday, the roof of a police building in central Kharkiv collapsed in flames.

Pavel Dorogoy, 36, a photographer who lives near the city center, said Russian forces had also targeted the city council building, which was empty at the time, a telephone exchange and a television tower on the edge of Kharkiv.

"Most people hid in the basements for most of the day today and last night ... The Russians cannot enter the town so they're just attacking us from afar, they just want to destroy what they can," he said.

Moscow denies targeting civilians and says it aims to disarm Ukraine, a country of 44 million people, in a "special military operation."

Russia said it would hold a second round of peace talks with Ukraine on Thursday on the border with Belarus, Russian news agencies reported, after a first round made scant progress on Monday. There was no immediate word from Kyiv on the reports.

President Volodymyr Zelenskyy said on Tuesday Russia must stop bombing if it wanted to negotiate.

In Washington's assessment, a U.S. official said, there has been no significant change on the ground in Ukraine since Tuesday despite the launch of more than 450 Russian missiles against Ukrainian targets.

Russia said it had captured Kherson, a southern provincial capital of around 250,000 people strategically placed where the Dnipro River flows into the Black Sea.

Zelenskyy adviser Oleksiy Arestovych denied Kherson was fully under Russian control, saying: "The city has not fallen, our side continues to defend."

Also in the south, Russia was bombarding the port of Mariupol, which it says it has surrounded in a ring around the Sea of Azov. The besieged city's mayor said Mariupol had suffered mass casualties after a night of intense strikes. He gave no full casualty figure, but said it was impossible to evacuate the wounded and that water supplies were cut.

Apple, Exxon, Boeing and other firms joined an exodus of international companies from Russian markets that has left Moscow financially and diplomatically isolated since President Vladimir Putin ordered the Feb. 24 invasion.

Russian Foreign Minister Sergei Lavrov said Moscow still sought Ukraine's "demilitarisation" and said there should be a list of specified weapons that could never be deployed on Ukrainian territory. Moscow opposes Kyiv's bid to join NATO.

U.S. President Joe Biden said in his annual State of the Union address on Tuesday that Putin had underestimated Ukraine and its Western supporters.

"He thought he could roll into Ukraine and the world would roll over. Instead, he met a wall of strength he could never have anticipated or imagined: he met Ukrainian people," Biden said, drawing applause from lawmakers who waved blue and yellow Ukrainian flags.

On Wednesday, asked if the United States would ban Russian oil and gas, Biden said "nothing is off the table."

Ukraine's deputy foreign minister Emine Dzhaparova won a standing ovation at the U.N. Human Rights Council in Geneva on Wednesday, in sharp contrast to a walk-out on Tuesday by more than 100 diplomats during an address by Lavrov.

Russia's defense ministry said 498 Russian soldiers had died in Ukraine and another 1,597 had been wounded since the start of the invasion. It was the first time Moscow put a figure on its casualties. It said more than 2,870 Ukrainian soldiers and "nationalists" had been killed, Interfax news agency reported.

Ukraine said more than 7,000 Russian soldiers had been killed so far and hundreds taken prisoner, including senior officers.

The numbers given by Moscow and Kyiv could not be independently verified.

Russia's main advance on the capital -- a huge armored column, stretching for miles along the road to Kyiv - has been largely frozen in place for days, Western governments say.

The U.S. official said the Russians "are behind schedule" in their assault on Kyiv.

The Kremlin's decision to launch war - after months of denying such plans - has shocked Russians accustomed to viewing Putin, their ruler of 22 years, as a methodical strategist.

Russia's ruble currency plunged to a new record low on Wednesday, a slide that will hit Russians' living standards, and the stock market remained closed. The central bank, itself under sanctions, has doubled interest rates to 20%.

In an echo of the post-Soviet economic collapse of the 1990s, Russians have queued at banks to salvage their savings.

Leading Russian opposition figure Alexey Navalny said from prison that Russians should protest daily against the war, a spokesperson tweeted.

Ukraine said more than 1,000 volunteers from 16 countries were on their way to fight alongside Ukrainian forces, and that it would free any Russian prisoners whose mothers come to collect them at the border.