Country has been attracting staff, business from two sides of conflict 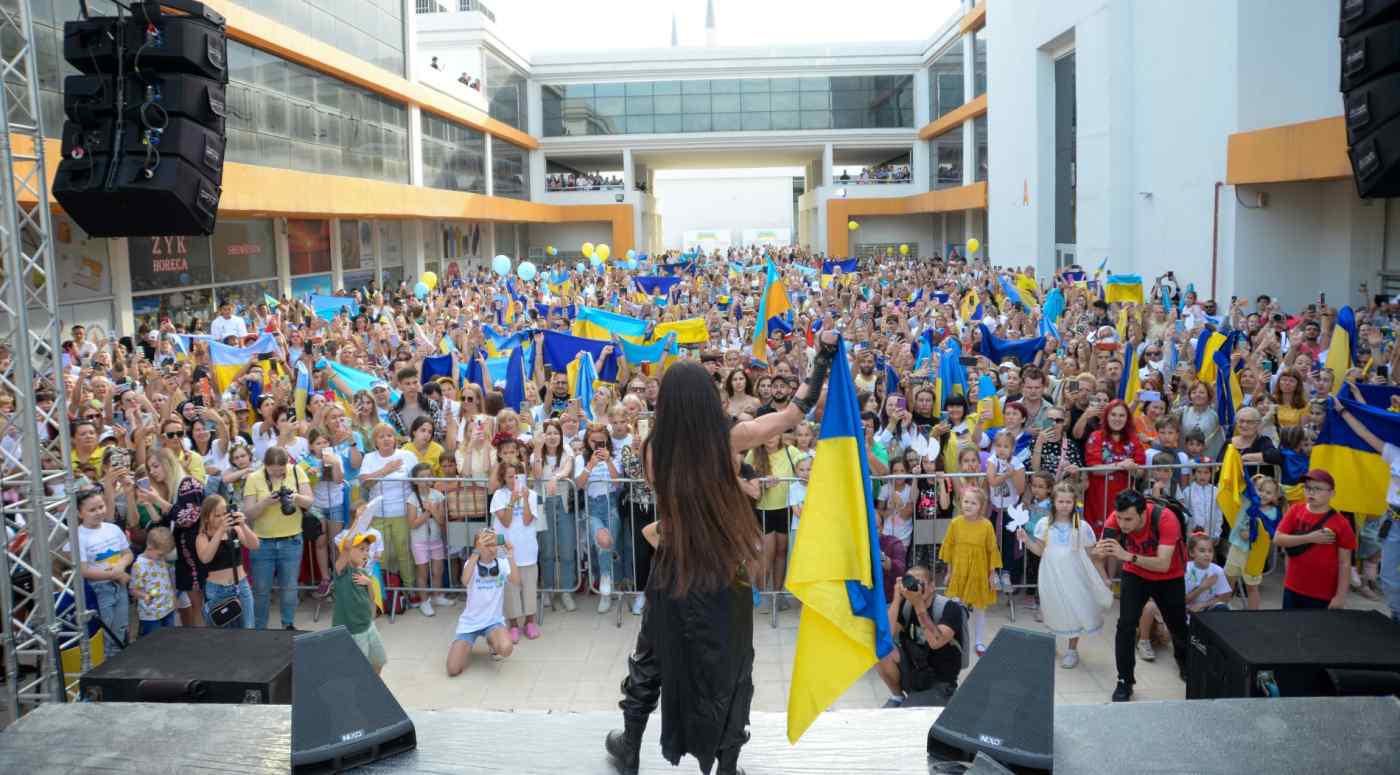 Ukrainian singer Ruslana gives a concert in the Turkish city of Antalya to support people from her country affected by the war with Russia. (Photo by Anadolu Agency)
SINAN TAVSAN and MOMOKO KIDERA, Nikkei staff writerJune 8, 2022 17:27 JST | Turkey
CopyCopied

ISTANBUL -- When Arsenii Frolov opened a company offering coworking space in the resort town of Antalya on Turkey's Mediterranean coast a year ago, he had no way of knowing that war in Ukraine would soon provide a windfall for his business.

"Right after the start [of the invasion], there was a big wave of demand for the first three weeks," Frolov, a former rally car pilot and defensive driving instructor, told Nikkei Asia. "From time to time, I've reached full capacity of 25-30 people during the day, while our average daily users are around 10 people. I am now looking for a good location to open a bigger branch, more than twice the current capacity."

That demand, Frolov said, has come from a roughly equal mix of Russian and Ukrainian tech workers, who together make up around 70-80% of his clients.

It is just one sign of how Turkey's strategy of positioning itself as something of a neutral zone is paying off. The country is attracting workers, money and business from both sides of the conflict -- though not everyone is benefiting.

On the one hand, Turkey has supported Ukraine since the beginning of the conflict. Before the invasion, it sold armed drones to the country that have been used to inflict heavy damage on Russian forces. Shortly after the war started, it closed the Turkish Straits -- the entry points to the strategically important Black Sea -- to all navies and barred Russian military aircraft from its skies, effectively limiting Russia's reinforcement options. All three countries have a border along the sea.

But it has also refused to sign up to the broad Western sanctions slapped on Russia, a key provider of energy, grains and tourists to Turkey. Emphasizing its desire to be a peacemaker between the two sides, it has hosted two rounds of negotiations between top Russian and Ukrainian officials.

Late last month, Foreign Minister Mevlut Cavusoglu told Turkish state media the country is only bound by United Nations sanctions and said imposing sanctions would imperil Turkey's position as a facilitator. "We have not signed up to sanctions, but we also will not let a channel be opened to bypass sanctions through us."

At his coworking space in Antalya's Konyaalti district, Frolov said there has not been a single incident between his Russian and Ukrainian tenants, as most of them focus on their work, headphones on and attention on their computers. Some, he said, have even become good friends with each other. 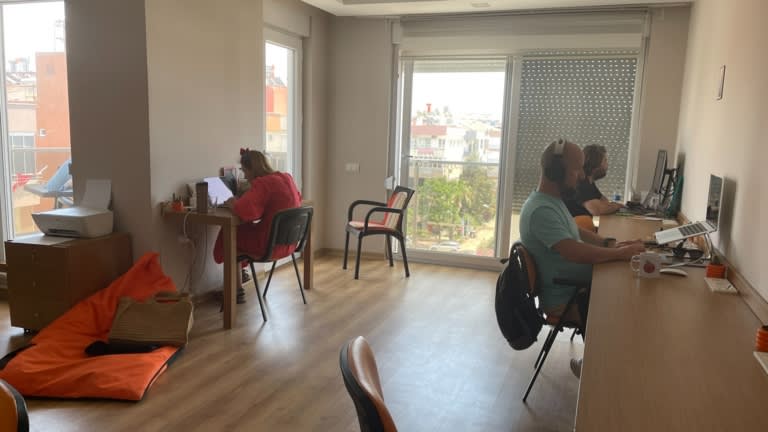 Arsenii Frolov says he is considering expanding his coworking space business in Antalya, Tukey, after demand surged following the outbreak of war in Ukraine. (Photo by Sinan Tavsan)

A similarly harmonious mix can be seen elsewhere in Konyaalti, where numerous luxury cars with Russian or Ukrainian license plates travel the streets, while the flags of Ukraine and Turkey hang from windows or balconies.

Not everyone, however, is entirely happy with the recent influx.

Kartal Bayraktar, who along with his Russian wife sells socks at a bazaar in Konyaalti, said Russians make up around 30% of his customers and Ukrainians 10%, and their numbers are growing fast. While this is not bad for business, Bayraktar says it is hitting him in another way: rent.

Home prices in Turkey more than doubled in the last year due to soaring inflation, which reached 73% in May. Now, the sudden surge in demand for property from foreign buyers is compounding the woes of locals in some cities and districts.

Bayraktar said his landlord tried to quadruple his rent for an old 85-sq.-meter, two-bedroom apartment in Konyaalti, and even suggested it was a reasonable request. He has now decided to leave the property, with his landlord saying he will be putting it up for rent at 8,000 Turkish lira ($468) a month -- more than seven times the current price.

Berat Akyurt, a real estate agent in Konyaalti, told Nikkei Asia that there has been unprecedented demand for both home sales and rentals by Russians and Ukrainians since the start of war. According to Kartal Bayraktar, around 40% of his weekly customers at the bazaar in Antalya are Russian and Ukrainian citizens. (Photo by Sinan Tavsan)

Demand for rentals is much higher, he said, as people coming from both countries are in a "wait-and-see mode" while the war drags on. This has driven rents sky-high, with some landlords now asking for a full year's rent and a six-month deposit up front. While Russians and Ukrainians are willing and able to pay this, Akyurt said, such sums are beyond most locals.

Russians also topped the list of foreign homebuyers in Turkey for the first time in April, with 1,152 transactions. Ukrainians came fifth with 263 purchases in April.

Some buyers, Akyurt suggested, are also attracted by Turkey's offer of citizenship for foreigners who spend a total of at least $250,000 on one or more homes, a figure that will be raised to $400,000 from June 13.

Akyurt said a Russian citizen, introducing himself as an engineer working in the oil sector in South America, looked into buying a home in April specifically to obtain Turkish citizenship. The man said his overseas bank account had already been frozen by authorities outside Russia. 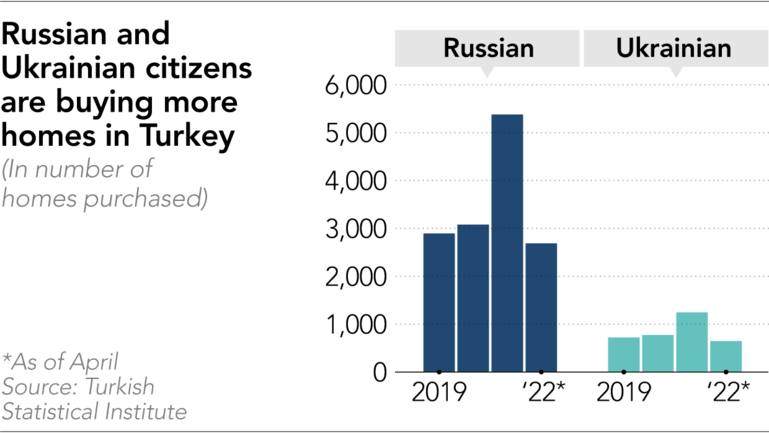 Turkey's friendliness to Russian and Ukrainian nationals alike is also attracting businesses. The openness is particularly welcome for Russians struggling to do business due to sanctions impacting operations in their home country and financial transactions across borders.

A total of 136 companies with Russian capital were established in Turkey in April, according to data from the Union of Chambers and Commodity Exchanges of Turkey. That is more than twice the number in March and nine times higher than the monthly average last year. Meanwhile, 22 companies were established with Ukrainian capital in April.

Izzet Ekmekcibasi, the head of the Turkey-Russia Business Council in Istanbul, said it is only natural that companies are gravitating to the country.

"Turkey's geographical location has always been a magnet for Russian, Ukrainian and Central Asian countries due its connections with the EU, the Middle East and so on," Ekmekcibasi told Nikkei Asia. "We are not a communist state and have long market economy experience and connections as a capitalist state, so they think Turkey can serve as a springboard. We are just looking for how we can contribute to peace and commerce. Both countries are friends of ours. We are seeking ways on what we can do without hurting any of them."

A separate source familiar with company establishment procedures said the official numbers may be just the tip of the iceberg, as many Russian business owners would like to avoid being seen as a "Russian company."

In some cases, the source said, the business owners may choose to operate through Turkish business partners informally without revealing their Russian origins to avoid backlash.

Other companies are setting up part of their operations in Turkey on a more short-term basis.

Alexander*, a Russian software engineer, told Nikkei Asia that he is one of 50 IT staff temporarily relocated to Istanbul from Russia by the European financial institution they work for. The institution told them the move was due to the "heightened country risk" as well as to seize the "management advantages" of working abroad In the Turkish town of Antalya, stores dealing in cryptocurrencies and outlets of Russian money wiring system Golden Crown are spreading rapidly. (Photo by Sinan Tavsan)

Alexander said many Russian companies are sending their IT staff to neutral countries like Turkey, the United Arab Emirates or Israel.

One of his colleagues said there were several reasons their company chose Turkey for relocation. "Turkey is close to Russia, it has frequent flights, is easy to live in and -- most important of all -- no visa is needed for short term visits."

As business-friendly as Turkey may be, however, banking presents more of a challenge, due to financial institutions' hesitancy surrounding international sanctions.

Still, the money is coming in.

Frolov, the coworking space operator, says many of his Russian customers are bringing in money either as cryptocurrency or via Russian money wiring system KoronaPay, as well as in cash, within the limits allowed by Russia.

In another resort town, Fethiye on the Aegean Sea, a similar story is playing out. A woman who rents her condo via Airbnb told Nikkei Asia that since the beginning of the war, all of her tenants have been Russians and Ukrainians -- a first for her.

Her current tenant is Boris*, a Russian website developer who ended up in Fethiye after feeling unwelcome at his first stop in Georgia, another country that Russia had partially invaded. Speaking at a Starbucks coffee shop by the sea in Fethiye, Boris talked about how he was not even able to enjoy going to a Starbucks in Russia, after the U.S. chain suspended all operations there before announcing it would exit the country.

He said he chose to leave Russia primarily out of fear of being drafted to the army, a rumor heavily circulating in Russian Telegram accounts.

"I certainly do not want to die for President [Vladimir] Putin's imperialistic ambitions," he said, adding that he has many good Ukrainian friends.

Like his compatriot, the Russian tech worker in Istanbul, Boris said his company probably chose Turkey for temporary relocation because it allows Russian citizens to stay in the country for up to 60 days without a visa, has frequent flights, nice weather, no-anti Russian sentiment and a low cost of living.

It is uncertain how long these trends will last. Ukraine's ambassador to Turkey said on June 3 that while 150,000 Ukrainians had fled to Turkey after the start of the war, there were now closer to 50,000 there, as many had returned home or moved to other countries.

Similar net figures for Russians are not available for the same period, but there are signs that many are preparing to make Turkey their home for the long haul.

Sevil Altiparmak is the Turkish headmaster at one of two privately-owned international schools in Antalya offering the official curriculum of the Russian Federation. Its 180 students range from kindergarten to high school age. Altiparmak said that she has recently been receiving five or six inquiries a day regarding enrollment for the coming autumn semester, more than ever before.

The school, which has capacity for 300 students, accepts children from Russian-speaking former Soviet countries.

"With this unprecedented level of interest, perhaps we will need new schools in the city," Altiparmak said.