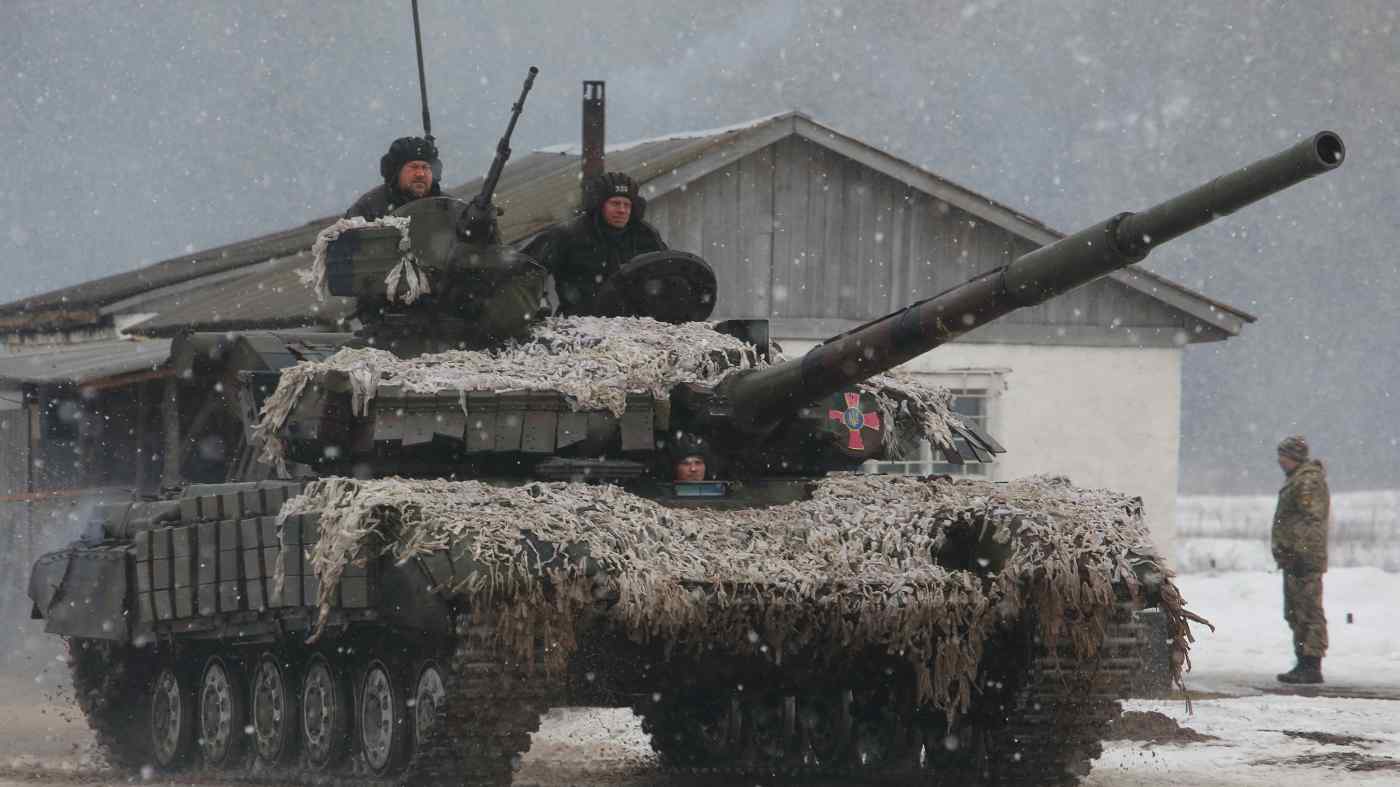 MOSCOW (Reuters) --Ukraine said its defence ministry and two banks had been hacked on Tuesday, appearing to blame Russia, as the West sought evidence from Moscow of a partial troop pullback.

The Kremlin, the United States and Europe are engaged in one of the deepest crises in East-West relations for decades over Ukraine, post-Cold War influence on the continent and energy supplies as Moscow wants to stop Kyiv ever joining NATO.

Western nations have suggested arms control and confidence-building steps to defuse the standoff and want Russia to reverse the build-up of some 130,000 soldiers on its neighbour's border.

On Tuesday, Russia said some were returning to base after exercises, prompting the U.S. Ambassador to the United Nations Linda Thomas-Greenfield to call for evidence, saying such a move "would be welcome news, if it is legitimate."

Ukraine did not say who it believed was responsible for the cyber attack, but a statement suggested it was pointing the finger at Russia.

"It is not ruled out that the aggressor used tactics of little dirty tricks because its aggressive plans are not working out on a large scale," said the Ukrainian Centre for Strategic Communications and Information Security, which is part of the culture ministry.

Privatbank users had problems with payments and a banking app, it said, Oshadbank said the cyberattack resulted in slowing down of some of its systems and a message on the defence ministry website's home page said it was under maintenance.

Russia's Federal Security Service did not immediately reply to a request for comment from Reuters.

One European diplomat said the hacking was concerning because a full military attack on Ukraine would likely be preceded by a cyber attack.

"It could mean a physical attack is imminent, or it could mean Russia is continuing to mess with Ukraine," the diplomat said, on condition of anonymity.

Distributed denial-of-service attacks, when hackers flood a network with unusually high volumes of data traffic to paralyse it, such as those seen in Ukraine on Tuesday, are difficult to attribute but the European diplomat said there was no doubt that Russia was behind them.

The United States has offered support in the investigation and response to the attack.

U.S. President Joe Biden is due to speak at 1530 ET (2030 GMT) about "the steps we have taken, the actions we are prepared to take, what's at stake for the U.S. and the world," according to the White House, which said there will be no new policy announcements.

U.S. Secretary of State Antony Blinken told Russian counterpart Sergei Lavrov during a call on Tuesday that there needed to be "verifiable, credible, meaningful de-escalation" by Moscow.

NATO's chief welcomed signals from Russia in the past two days that it may be looking for a diplomatic solution but urged Moscow to demonstrate its will to act.

"There are signs from Moscow that diplomacy should continue," NATO Secretary-General Jens Stoltenberg told reporters.

He said Russia often left military equipment behind after exercises, creating the potential for forces to regroup.

At a joint news conference with German Chancellor Olaf Scholz, Russian President Vladimir Putin referred only briefly to the troop moves and did not go into details.

Russia has always denied planning to invade Ukraine, saying it can exercise troops on its own territory as it sees fit. It has been pressing for a set of security guarantees from the West.

Putin told reporters Russia would not be satisfied with talk that Ukraine was not ready to join the western military alliance any time soon and was demanding that the issue be resolved now.

"As for war in Europe ... about whether we want it or not? Of course not. That is why we put forward proposals for a negotiation process, the result of which should be an agreement on ensuring equal security for everyone, including our country," he said.

Recognition of the self-declared Donetsk and Luhansk People's Republics could kill the Minsk peace process in east Ukraine, where a conflict between government forces and Moscow-backed separatists has caused 15,000 deaths.

Asked about the move, Putin said the regions' problems should be solved on the basis of the Minsk agreements, which were signed in 2014 and 2015 but have never been implemented. Scholz said all sides should stick to those accords.

Russia's show of force near Ukraine's borders has prompted months of frantic Western diplomacy and drawn threats of severe sanctions if it invades, culminating in a crescendo of warnings in recent days that this could happen at any time.

The Kremlin sought to portray its moves as proof that Western talk of war had been both false and hysterical.

Commercial satellite images taken on Sunday and Monday showed a flurry of Russian military activity at several locations near Ukraine, including large deployments of troops and attack helicopters, and warplanes moving to forward locations.

Russian shares, government bonds and the rouble, which have been hit by fears of impending conflict, rose sharply as the situation seemed to ease slightly, and Ukrainian government bonds rallied.