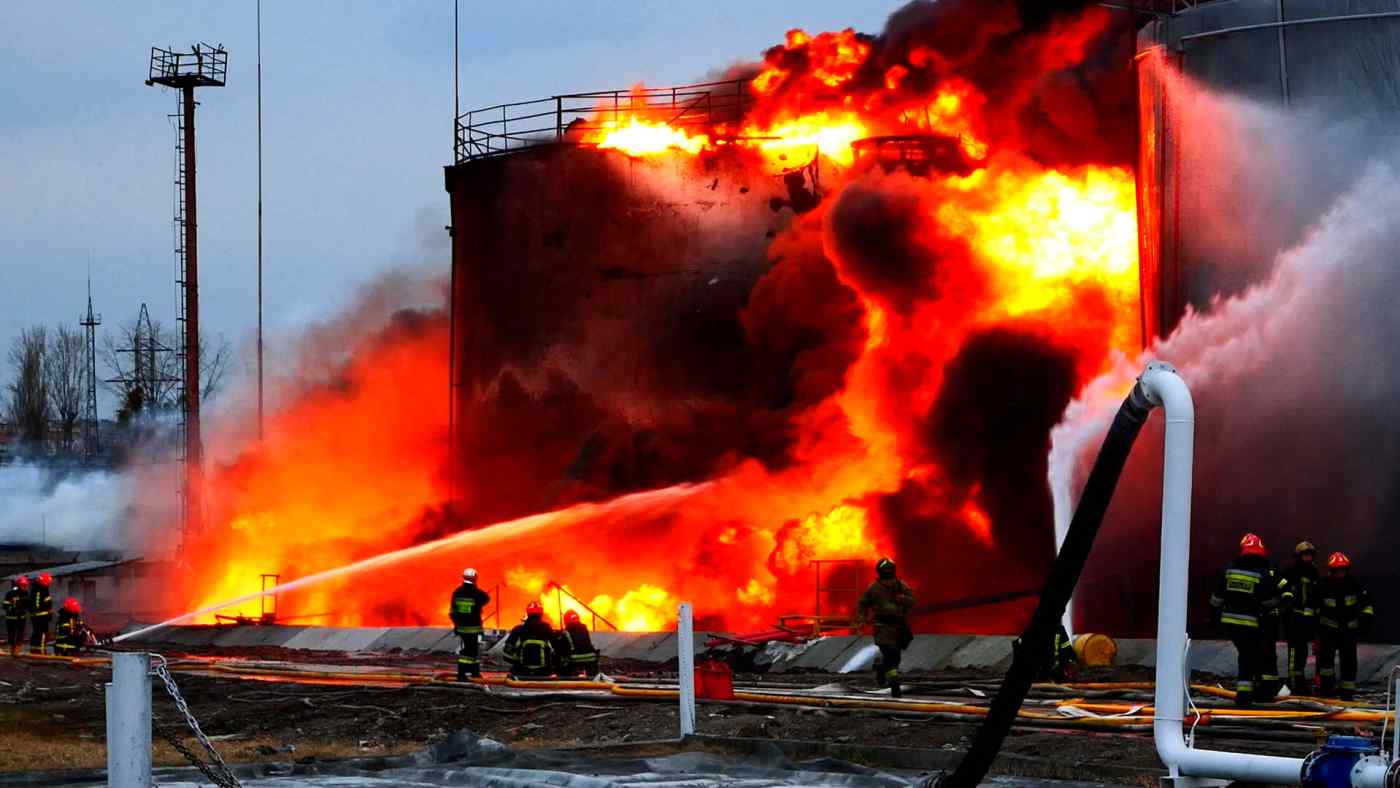 LVIV, Ukraine (Reuters) -- Russia wants to split Ukraine into two, as happened with North and South Korea, Ukraine's military intelligence chief said on Sunday, vowing "total" guerrilla warfare to prevent a carve up of the country.

President Volodymyr Zelenskiy urged the West to give Ukraine tanks, planes and missiles to help fend off the Russian forces, which the Kyiv government said were increasingly targeting fuel and food depots.

U.S. Secretary of State Antony Blinken said Washington had no strategy of regime change in Moscow, telling reporters in Jerusalem that Biden had simply meant Putin could not be "empowered to wage war" against Ukraine or anyone else.

After more than four weeks of conflict, Russia has failed to seize any major Ukrainian city and Moscow signalled on Friday it was scaling back its ambitions to focus on securing the Donbass region of eastern Ukraine, where Russian-backed separatists have been fighting the Ukrainian army for the past eight years.

A local leader in the self-proclaimed Luhansk People's Republic said on Sunday the region could soon hold a referendum on joining Russia, just as happened in Crimea after Russia seized the Ukrainian peninsula in 2014.

Crimeans voted overwhelmingly to break with Ukraine and join Russia -- a vote that much of the world refused to recognise.

"In fact, it is an attempt to create North and South Korea in Ukraine," Kyrylo Budanov, the head of Ukrainian military intelligence, said in a statement, referring to the division of Korea after World War Two.

He predicted Ukraine's army would push back Russian forces.

"In addition, the season of a total Ukrainian guerrilla safari will soon begin. Then there will be one relevant scenario left for the Russians, how to survive," he said.

Moscow says the goals for what Putin calls a "special military operation" include demilitarising and "denazifying" its neighbour. Ukraine and its Western allies calls this a pretext for an unprovoked invasion.

In a late-night television address on Saturday, Zelenskiy demanded that Western nations hand over military hardware that was "gathering dust" in stockpiles, saying his nation needed just 1% of NATO's aircraft and 1% of its tanks.

Western nations have so far given Ukraine anti-tank and anti-aircraft missiles as well as small arms and protective equipment, but have not offered any heavy armour or planes.

"We've already been waiting 31 days. Who is in charge of the Euro-Atlantic community? Is it really still Moscow, because of intimidation?" Zelenskiy said, suggesting Western leaders were holding back on supplies because they were frightened of Russia.

Ukrainian Interior Ministry adviser Vadym Denysenko said on Sunday that Russia had started destroying Ukrainian fuel and food storage centres, meaning the government would have to disperse stocks of both in the near future.

Appearing to confirm that, the Russian defence ministry said its missiles had wrecked a fuel deposit on Saturday as well as a military repair plant near the western city of Lviv, just 60 km (40 miles) from the Polish border.

In its latest military assessment, the British Ministry of Defence said Russian forces appeared to be concentrating their efforts on encircling Ukrainian troops directly facing separatist regions in the east.

Biden drew criticism for his improvised remarks during a speech in Warsaw that sought to frame the war as part of a historic struggle for democratic freedoms.

"For God's sake, this man cannot remain in power," Biden said of Putin. Earlier he called the Russian leader a "butcher".

U.S. officials tried to walk back the president's words, with a White House official saying they were not a call for Putin's removal, but rather meant that he should not be allowed to exercise power over his neighbours or the region.

U.S Secretary of State Blinken echoed the sentiment. "As you know, and as you have heard us say repeatedly, we do not have a strategy of regime change in Russia - or anywhere else, for that matter," he said in Jerusalem.

The United Nations has confirmed 1,104 civilian deaths and 1,754 injuries across Ukraine but says the real toll is likely to be higher. Ukraine said on Sunday 139 children had been killed and more than 205 wounded so far in the conflict.

The encircled port, which lies between Russian-annexed Crimea and eastern areas held by Russian-backed separatists, has been devastated by weeks of heavy bombardment, forcing thousands of residents to take shelter in basements with scarce water, food, medicine or power.