Biden to host Friday call with leaders; Blinken-Lavrov talks set for next week 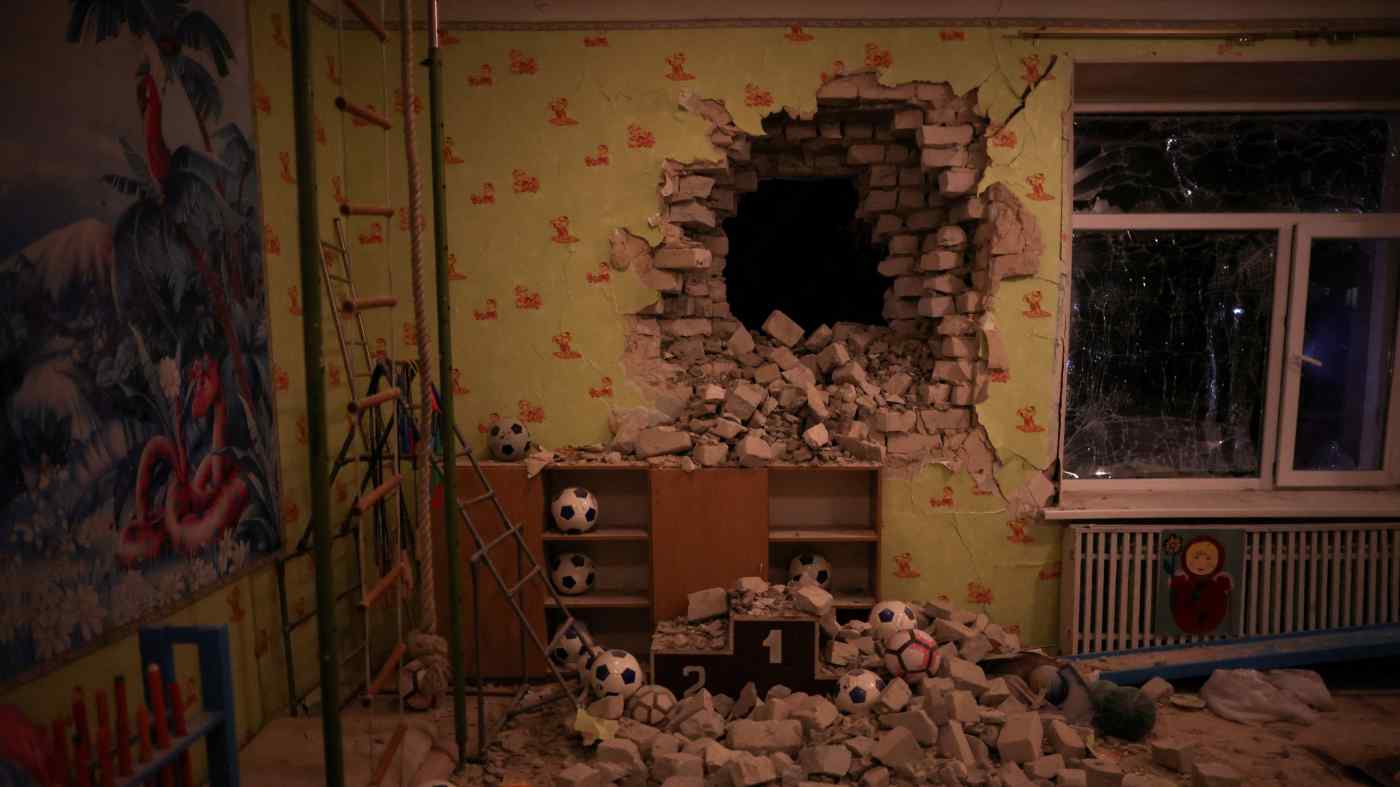 Ukrainian officials claim a kindergarten, shown above, was damaged by recent shelling in the Luhansk region of the country.   © Reuters
February 18, 2022 12:22 JST | Russia & Caucasus
CopyCopied

MOSCOW/KYIV (Reuters) -- Shelling in Ukraine on Thursday renewed Western fears of an imminent Russian invasion as U.S. President Joe Biden said Moscow is preparing a pretext to justify a possible attack and the Kremlin expelled an American diplomat.

Early morning exchanges of fire between Kyiv's forces and pro-Russian separatists - who have been at war for years and where a ceasefire is periodically violated - caused alarm as Western countries have said an incursion could come at any time.

One of the deepest crises in post-Cold War relations is playing out in Europe as Russia wants security guarantees, including Ukraine never joining NATO, and the U.S. and allies offer arms control and confidence-building measures.

While Russia accuses the West of hysteria, saying some of its troops have returned to bases and that it has no plans to invade, many Western countries are adamant that the military build-up is continuing ahead of a possible assault.

"We have reason to believe they are engaged in a false flag operation to have an excuse to go in," Biden told reporters at the White House. "Every indication we have is they're prepared to go into Ukraine and attack Ukraine."

He ordered Secretary of State Antony Blinken to change his travel plans at the last minute to speak at a United Nations Security Council meeting, where he outlined possible Russian scenarios.

"It could be a fabricated so-called terrorist bombing inside Russia, the invented discovery of a mass grave, a staged drone strike against civilians, or a fake -- even a real -- attack using chemical weapons," Blinken said. "Russia may describe this event as ethnic cleansing, or a genocide."

Diplomatic efforts will continue on Friday when Biden hosts a call with the leaders of Canada, France, Germany, Italy, Poland, Romania, Britain, the European Union and NATO. Blinken will meet counterparts at the Munich Security Conference.

He will also discuss the crisis late next week with Russian foreign minister Sergei Lavrov, "provided there is no further Russian invasion of Ukraine," the State Department said.

But in a blow to U.S.-Russian relations, Russia expelled U.S. Deputy Chief of Mission Bart Gorman. The move was announced on Thursday but a senior State Department official said he left last week.

Moscow cited the U.S. expulsion of a senior official in Washington, who it said was forced to leave before a replacement could be found as part of a U.S. "visa war."

Washington said it would respond to the "unprovoked" move. Russian diplomats who have stayed longer than three years must leave the United States, while Moscow is giving U.S. diplomats less time, a State Department spokesperson said.

In Ukraine, Russian-backed rebels and Kyiv's forces traded accusations that each had fired across the ceasefire line in eastern Ukraine, where Moscow accuses Kyiv of "exterminating" civilians.

Ukrainian government forces denied accusations of having targeted separatist positions in the breakaway region of Donbass, which borders Russia.

Details could not be established independently, but reports from both sides suggested an incident more serious than the routine ceasefire violations that are often reported in the area.

Ukraine's President Volodymyr Zelenskiy said the pro-Russian forces had shelled a kindergarten, in what he called a "big provocation."

Video footage released by Ukrainian police showed a hole through a brick wall in a room scattered with debris and children's toys.

"Some provocations were planned for today, we expected them and thought that a war had begun," Dmytro, a resident of the village of Stanytsia Luhanska, told Reuters.

The separatists, for their part, accused government forces of opening fire on their territory four times in the past 24 hours.

A Reuters photographer in the town of Kadiivka, in Ukraine's rebel-held Luhansk region, heard the sound of some artillery fire from the direction of the line of contact, but was not able to determine details.

Estimates also vary as to how many Russia soldiers have massed near Ukraine. Nearby NATO member Estonia cited around 170,000 troops on Wednesday.

White House spokesperson Karine Jean-Pierre said that Russia had added 7,000 troops to its presence at the Ukrainian border over the past 24 hours.

"We see them fly in more combat and support aircraft. We see them sharpen their readiness in the Black Sea," Defense Secretary Lloyd Austin said at NATO headquarters in Brussels.

Maxar Technologies, a private U.S. company that has been tracking the build-up, said satellite images showed that, while Russia has pulled back some military equipment from near Ukraine, other hardware has arrived.

As talks continue, Russia says its security demands are still being ignored.

"In the absence of the readiness of the American side to agree on firm, legally binding guarantees of our security from the United States and its allies, Russia will be forced to respond, including through the implementation of military-technical measures," it said in a letter.