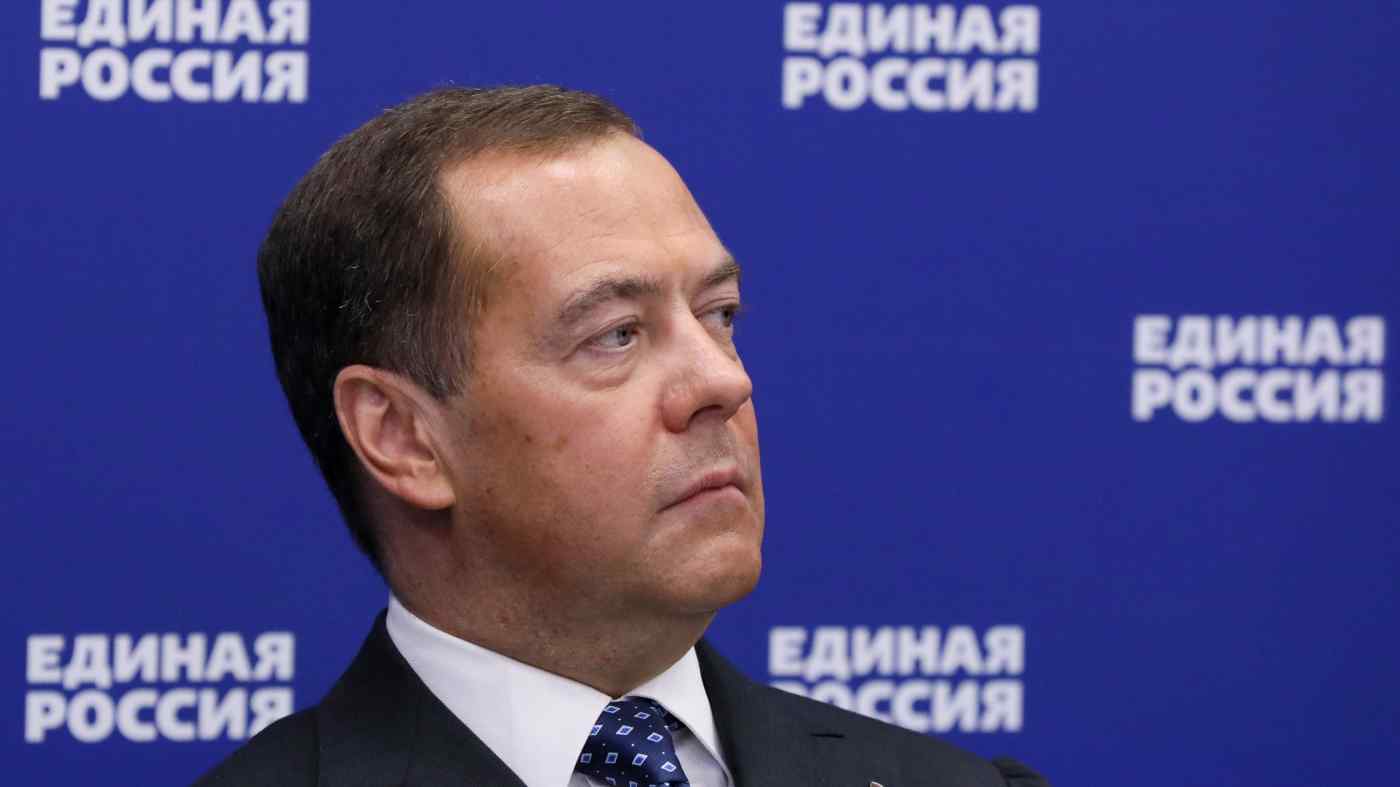 Russian ex-President Dmitry Medvedev was quoted as saying on Friday that it is "foolish" to believe Western sanctions could have any effect on the Moscow government.   © Reuters
March 26, 2022 15:31 JST | Russia & Caucasus
CopyCopied

(Reuters) -- It is "foolish" to believe that Western sanctions against Russian businesses could have any effect on the Moscow government, Russia's ex-president and deputy head of its Security Council, Dmitry Medvedev, was quoted as saying on Friday.

The sanctions will only consolidate Russian society and not cause popular discontent with the authorities, Medvedev told Russia's RIA news agency in an interview.

The West has imposed an array of sanctions on Russia following its invasion of Ukraine, but one month into the war, the Kremlin says it will continue the assault until it accomplishes its goals of Ukraine's "demilitarization and denazification".

Some of the sanctions have specifically targeted billionaire businessmen believed to be close to President Vladimir Putin.

"Let us ask ourselves: can any of these major businessmen have even the tiniest quantum of influence of the position of the country's leadership?" Medvedev said.

Medvedev said there are several grounds under which Russia has the right to use nuclear weapons, including an attack on the country or encroachment on infrastructure as a result of which Russia's nuclear deterrent forces would be paralyzed.

That demonstrated Russia's "determination to defend the independence, sovereignty of our country, not to give anyone a reason to doubt even the slightest that we are ready to give a worthy response to any infringement on our country, on its independence," he said.

However, negotiations -- even in the most difficult situations such as those around Ukraine -- are Moscow's preferred path to proceed, he added.

Medvedev said opinion polls showed three-quarters of Russians supported the Kremlin's decision to carry out a military operation in Ukraine and even more supported President Putin.

While downplaying the economic impact of sanctions, Medvedev said the Russian government will have to find "adequate solutions" on its own to spur the development of the aircraft, automotive and IT industries, among others.

"Now, it will be more difficult to tackle those issues, but on the other hand, we cannot rely on anyone," Medvedev said. "In this case, we will have to solve those problems ourselves."

He lashed out at those Russians who spoke against the invasion while staying outside Russia.

"But you cannot take a stand against the state in such a difficult situation, because this is treason."

Thousands of people were earlier this month detained at Russia-wide protests against Putin's invasion of Ukraine, according to an independent protest monitoring group.