SEOUL -- The debate on universal basic income has gained momentum in South Korea, as the coronavirus outbreak and the country's growing income divide force a rethink on social safety nets.

The concept was thrust into the spotlight in the country when Gyeonggi Province Gov. Lee Jae-myung proposed a basic income of 500,000 won ($430) a year per person this year. He aims to gradually expand the figure until it reaches 500,000 won a month -- roughly the equivalent of South Korea's social welfare payments.

An annual $430 payout means the program will cost $21.3 billion a year, which likely can be funded through budgetary adjustments. But a monthly $430 will cost $256 billion, which is over half the national budget.

"We cannot get to 500,000 won a month right now," Lee said. "But we can get there in 15 to 20 years by bolstering taxes on land, which is a public asset, carbon dioxide emissions from burning fossil fuels, and digital services developed using data we have produced."

Basic income "will be a major topic in South Korea's next presidential election," Lee said.

Lee is advocating distributing basic income in the form of a regional currency -- an experiment Gyeonggi Province already tested with coronavirus-linked assistance. Each resident received 100,000 won, about $85, in a regional currency, which needed to be spent in three months, allowing the entire sum used for the program to be recirculated back into the local economy. The lawmakers envision diverting some regional taxes to a special budget to fund basic income. Shortfalls could be addressed by streamlining redundant social benefits and reviewing tax relief programs.

The concept is gaining ground not only in the left, but also among conservatives who traditionally favor small government.

"It is time to seriously consider the idea of a basic income," said Kim Chong-in of the People Power Party back in June. 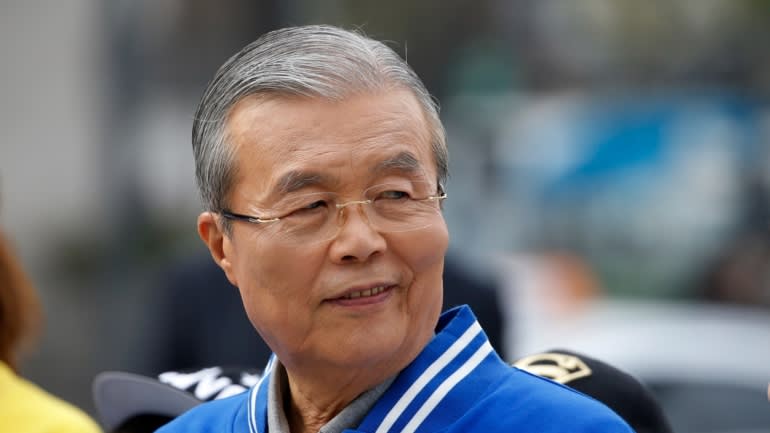 Kim Chong-in, leader of the People Power Party, suggested it was time for the country to consider basic income back in June.    © Reuters

As part of its 10 major policy pledges adopted Sept. 2, the People Power Party said it will actively help the South Korean public lead a stable and free life through basic income.

South Korea's growing wealth gap is a main driver of the debate. The top 20% made 5.26 times as much as the bottom 20% in October-December 2019, compared with 4.37 times in the same quarter in 2015 -- a trend attributed to an increase in low-paying part-time and contract jobs.

There is concern that the gap will only grow in the medium- to long-term, as advancements in artificial intelligence and other technologies eliminate certain jobs. The emergency cash payment the South Korean government made to all but the wealthiest households in response to the coronavirus has also pushed more to consider the possibility of a basic income.

In the U.S., Andrew Yang, who made an unsuccessful bid for the Democratic Party's 2020 presidential nomination, advocated the introduction of universal basic income.

Still, the South Korean government remains wary of the idea. "Our priority right now is overcoming the coronavirus crisis, and the debate on basic income can wait," Economy and Finance Minister Hong Nam-ki said in July.

South Korea's welfare spending is about half the average of the Organization for Economic Cooperation and Development. Many believe the government should focus most on low-income households that need assistance the most.