Unrest in Uighur region puts Beijing in a bind

BEIJING -- Continuing violence in China's Xinjiang Uighur Autonomous Region, home to much of the country's ethnic Uighur minority, has prompted Chinese President Xi Jinping to place security authorities on full alert in a "war against terrorism." But this crackdown has only incited fresh violence, leading to a cycle of hostility that may prove difficult to break. 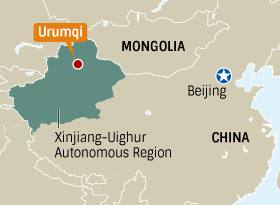 Behind the turmoil are deep-rooted ethnic divisions. The central government's policy of economic reconciliation -- promoting infrastructure and other development in the region to ease local grievances -- has only aggravated the situation, as these efforts tend to benefit only the ethnic Han majority.

Xi began pitching the idea for "Silk Road Economic Belt" during his visits to Central Asia in September last year, and the idea seems to be catching on.

In an economic and technological development zone on the outskirts of Urumqi, the capital of Xinjiang, construction of a high-speed railway is well underway.

Major domestic and foreign companies have already set up factories in the zone, including Germany's Volkswagen, Coca-Cola of the U.S. and Sany Heavy Industry, a major Chinese construction machinery maker.

Economic development in the autonomous region is indeed remarkable, but a walk around town quickly reveals the cracks in the facade.

Armed officers, their uniforms bearing the logo of a special police unit, regularly stop cars being driven by Uighurs and ask: "Is anything in the car? Open the trunk." In Urumqi, police officers are stationed every few dozen meters, and armored vehicles frequently patrol the city. The oppressive atmosphere of the city is a far cry from that of a vibrant economic hub.

The Chinese government began to emphasize economic development in Xinjiang following the Urumqi riots in 2009, when, according to authorities, Uighurs clashed with police, leaving 197 people dead or wounded. Xinjiang at that time ranked 30th in gross domestic product among 31 provinces, autonomous regions and municipalities. The government considered poverty to be the cause of the riots.

More than five years later, the government has accelerated its investment, helping to raise the autonomous region's GDP. Xinjiang now ranks sixth, but economic growth has only intensified the problems.

In the Yamarick Mountain area in central Urumqi, many Uighur residents maintain their traditional way of life, living in one-story brick houses. The area, however, is enclosed by an iron fence, and police officers at the entrance keep a strict watch on people going in and out. Even residents returning home have to sign in to gain entry.

Urumqi's numerous high-rises belong to major companies and state-owned corporations run by ethnic Han businesspeople. Most of the luxury cars seen around the city are driven by wealthy Han. As the widening economic gap stokes tensions between the ethnic groups, the government continues to tighten its control over the Uighur minority.

A resident in Kashgar Prefecture, in southwestern Xinjiang, said that if a photograph or message sent by messaging app WeChat is regarded as even the least bit suspicious, police quickly show up and ask questions: "Why did you take and send a photo of a police officer? Are you a terrorist?" A taxi driver in Urumqi said, "I've been unable to communicate with my friend in Kashgar for almost a month."

Uighurs in Kashgar are in constant conflict with authorities trying to restrict their ethnic dress and even men's beards. A group of women and children who were worshipping at someone's home were allegedly rounded up and taken to a police station on suspicion of holding a "terrorist gathering."

On July 28, a riot, said to be the largest since the 2009 Urumqi riots, broke out in Kashgar Prefecture. According to the official announcement, about 100 people died, but a rumor among local Uighurs places the number at nearly 1,000. Violent resistance against the government's crackdowns continues and discontent may explode again at any time.

Worsening public order in Xinjiang is already having a chilling effect on business.

Volkswagen planned to open its Urumqi plant to the public and the media during the expo, but later announced it had canceled the event for security reasons. An official at major manufacturer operating in Xinjiang said, "Some of the managerial staff who teach technical matters to employees now refuse to be assigned here, making it difficult to secure appropriate personnel."

Profits for major industrial companies in the autonomous region fell around 12% on average in the first five months of this year. In a blow to tourism, one of the key industries in the region, the number of visitors dropped for the first time in 20 years.

On the iron fence near the entrance to Urumqi's Yamarick Mountain, a sign reads, "China's dream, my dream." It is one of Xi's pet political slogans, but it elicits a cold response from Uighur people. "'China's dream'? Say that when the region is more stable," said a man who lives in the neighborhood. "Maybe they meant to say 'Han's dream.'"