Nurses practice smiling with chopsticks in their mouths at a hospital in Handan, Hebei province, China, May 8, 2017.   © Reuters
Politics

China may have achieved nominal universal healthcare coverage but the chronic inadequacies of the state system, coupled with rising incomes, are driving urban consumers towards private insurers.

Among the 2,000 consumers nationwide surveyed by FTCR, 21.7 per cent said they had some private cover in addition to the state programmes (see chart). 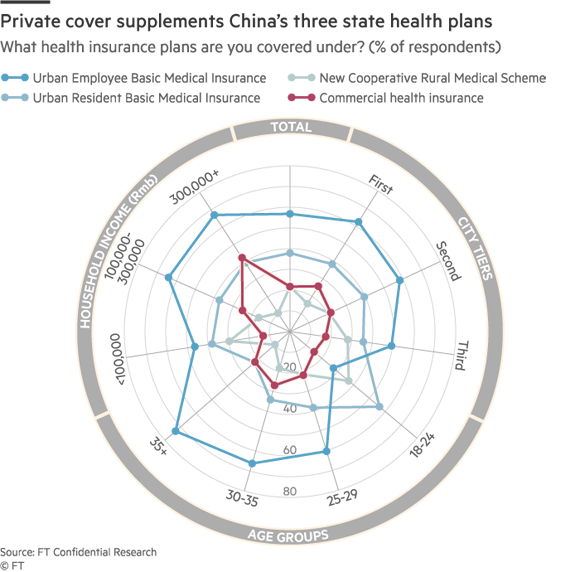 Coverage was greatest among high-income households - 42.5 per cent of this group said they were privately covered - and among residents of first-tier cities, where 25.8 per cent of respondents said they paid, versus 17.4 per cent in third-tier cities.

Official data show that sales growth fell sharply this year as a result of a crackdown on policies with investment components, used by insurers to leverage asset purchases at home and abroad. Sales of health insurance premiums surged 67.7 per cent last year to Rmb404.2bn ($60.9bn), partially inflated by this business, but growth slowed to just 3 per cent in the year to August 2017.

However, we believe premiums are poised to return to faster growth as the government forces the industry to get back to the business of insuring. We expect premiums to rise by around 30 per cent next year (see chart). 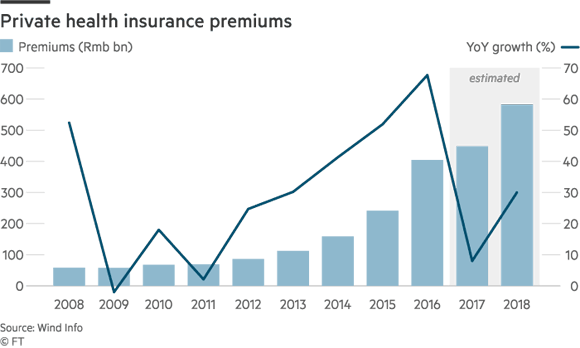 Insurers around the country told FTCR that sales of health policies have been brisk this year, despite the restriction on sales of investment-linked policies. Zhang Lei, a manager with the Chengdu branch of Ping An, China's largest health insurance provider, said sales have risen by more than 80 per cent a year for the past two years.

Among urban respondents with private cover, 43.5 per cent said they pay directly (see chart). In the US, by comparison, just 16.2 per cent buy directly. Chinese employers already pay a low percentage of employee salaries into the state program and are loath to pick up the additional cost of private cover. Although more companies are expected to offer cover to win or retain talent - Starbucks this year extended coverage to the parents of its mainland employees, for example - we expect self-financed premiums to remain the big driver of growth. In 2011, the Chinese government said it achieved universal healthcare, with more than 95 per cent of the population covered by at least one of three programs. Public spending on healthcare was ramped up following the outbreak of Sars virus in 2003, but the state offering is as shallow as it is broad (see charts). When Wuhan native Zhuang Longzhang's six-year-old son Yumin was diagnosed with acute leukaemia, the state agreed to cover just 30 per cent of the family's first Rmb15,000 bill. After a year, co-payments totalled Rmb100,000 - equivalent to 18 months of the Zhuangs' household income. Mr Zhuang wound up borrowing from friends to make payments. His son was given the all-clear earlier this year but Mr Zhuang still owes more than Rmb200,000.

The government recognizes the inadequacies of its system. In 2015, the State Council set a plan for the government to cover at least 50 per cent of the expenses related to critical illness. However, funding has fallen short as more advanced but costly treatments are developed. In Xi'an, the capital of Shaanxi province, for example, just 49 per cent of urban areas and 41 per cent of rural areas are covered by this increased critical illness cover, even though the city's insurance fund is already running at a loss.

Most respondents to our survey said they bought commercial health insurance to guarantee more complete coverage versus factors such as the level of service on offer or the availability of consultants. Most private plans cover at least 90 per cent of the costs for treating critical illness, while some cover overseas inpatient treatment. In contrast, the state programs are intended to cover 70 per cent of critical illness costs, although the experience of Zhuang Yumin shows how short they can fall. Among respondents to our survey with private plans, 37.3 per cent said they intend to purchase additional critical illness cover in the coming 12 months.

A 2016 World Bank-Chinese government study warned that, without adequate reforms, official spending on health could nearly double to more than 9 per cent of GDP by 2035, an increase the country will struggle to meet as the economy slows.

As China ages, the government has recognized the role private health insurance can play in taking the strain off state funding. The government this year allowed tax deductions of up to Rmb2,400 on employer-provided health cover, a small but meaningful step to get more workers covered.

Regime change at the insurance regulator will also encourage the take-up of commercial health cover. The commission's chairman was sacked this year after the speculative excesses wrought by his attempts to open the industry up to private domestic firms. The commission met with foreign insurers in September and pledged to open the market up further, which could mean equity ownership caps are lifted, along with other rules on how these providers are permitted to operate in China.

This will not immediately challenge the overwhelming dominance of the state-owned giants (see chart), but greater engagement signals the government's eagerness to deepen and broaden the health insurance market. 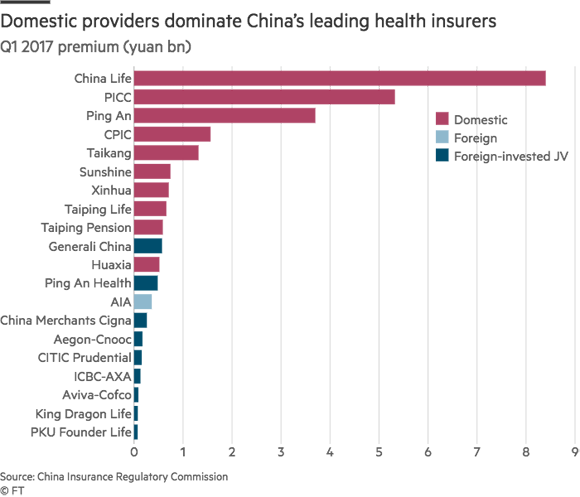 This article was first published on November 7 by FT Confidential Research.