Vatican-China deal has potential to be blessing for Beijing A believer reads the bible at a government-sanctioned Catholic church in Beijing.   © Reuters

BEIJING/GENEVA -- China and the Vatican both have something to gain from the historic agreement they reached in September on the nomination of bishops, but as the dust settles, some say the benefits are weighted heavily in Beijing's favor.

The accord has been billed as a "historic rapprochement," 67 years after the two sides severed diplomatic ties. But critics argue it marks a major compromise on the part of the Vatican in order to win more adherents, and they say it will only help perpetuate China's single-party rule.

Chinese Catholics who fled persecution to Hong Kong have told local media the accord does an extreme disservice to followers of an "underground church" in China. Cardinal Joseph Zen, the former archbishop of Hong Kong, said the Holy See does not understand China.

China and the Vatican broke off relations in 1951 after the atheistic Communist Party took control of the country. Since then, they have been at odds over who has the right to appoint bishops. As a result, an estimated 12 million Catholics in China are divided between the state-authorized Chinese Patriotic Catholic Association and an unregistered, underground church that swears loyalty to the Vatican.

There are three types of bishops -- those recognized by both China and the Vatican, and those accepted by only one side or the other.

Under the provisional agreement reached in September, the Vatican recognizes eight bishops appointed by China -- one of whom died last year. Since no other details have been disclosed, it is unclear how bishops authorized by the Vatican and their followers will be treated.

"Both sides lose something" in the arrangement, Pope Francis said. He recognized that the Catholics of the underground church "have suffered," and that "they will suffer."

"Always, in an agreement, there is suffering." 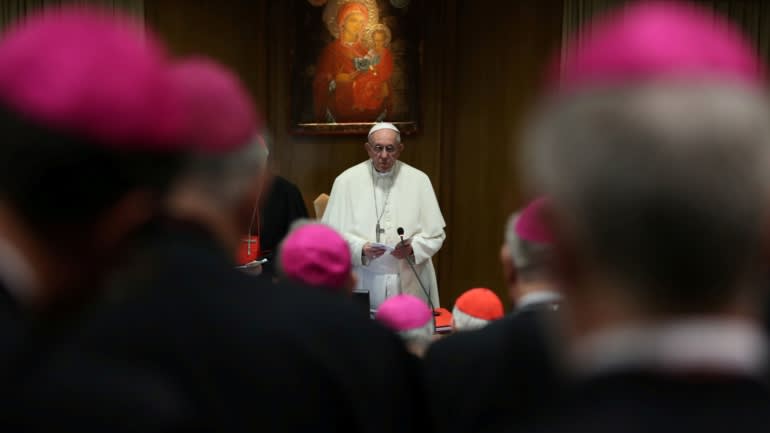 Pope Francis, seen leading a synodal meeting of bishops at the Vatican on Oct. 3, has said any agreement entails "suffering."   © Reuters

Francis did say that while the Vatican will discuss bishop candidates with China, the pope will have the final say over nominations. The most likely scenario is that China will name candidates and the Vatican will wield veto power. Still, this runs counter to the Holy See's policy for selecting bishops worldwide.

Why did the Vatican compromise?

Most likely, it sees China as a growth market for missionary work, with its population of 1.4 billion. While there are nearly 1.3 billion Catholics around the globe, the number is decreasing in Europe, partly due to aging. Attracting more adherents in China would also help the Vatican absorb the impact of the sexual abuse scandals that have exploded in the U.S. and Europe.

Francis has been emphasizing the importance of Asia for the church since he became pope. He hails from the Society of Jesus, a congregation that actively sought to spread the faith to China and Japan in the 16th century.

The pope likely hopes that better Vatican-Beijing relations would also improve the fortunes of underground Catholics. But critics say the deal will make it easier for China to shepherd them to CPCA churches and tighten controls on them.

Even within the Holy See, there are clearly concerns the arrangement will backfire. The Vatican stresses the agreement is "provisional" and subject to "periodic review."

For China, there are a number of benefits beyond the ability to influence bishop selections. For one thing, the pact shows Beijing is not isolated from the international community, despite deepening Sino-U.S. antagonism.

The arrangement also raises questions about the outlook for Taiwan's diplomatic ties with the Vatican -- the only sovereign state in Europe to maintain such a relationship with the island.

It appears the Vatican and China did not discuss restoring their own diplomatic ties, in their talks on the accord. The Vatican may be saving this as a bargaining chip for future negotiations.

Even though the Vatican is treading carefully, Chinese President Xi Jinping's harsh stance on religion gives the critics ammunition. The government recognizes "freedom of religion" on the surface but imposes tough restrictions on Uighur Muslims and Tibetan Buddhists.

Religions must follow the Communist Party's guidance and the path of socialism with Chinese characteristics, Wang Zuoan, director of the State Administration for Religious Affairs, stressed in a party journal in August.

There is more at stake than religious freedom. Expectations that economic development would drive China to accept personal liberty and democracy have faded. Instead, China "offers a new option" for emerging and other countries to follow, Xi said in his address to the party's National Congress last autumn -- hinting at his determination to overturn the Western-led world order.

China's political system holds appeal for African and Asian governments seeking to develop their economies while maintaining tight political control. To them, Beijing's deal with the Vatican suggests it is possible to follow the Chinese model and still gain international acceptance.