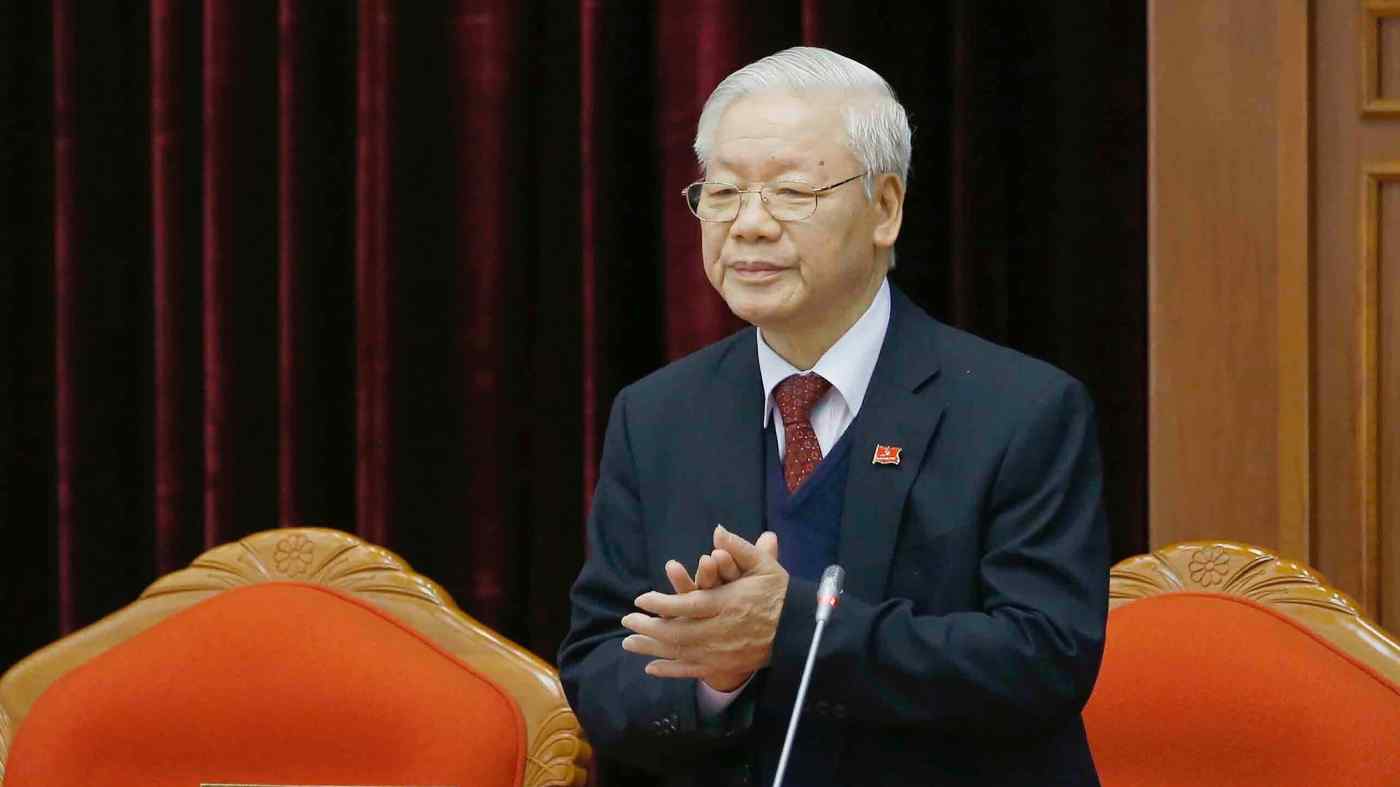 HANOI -- The Communist Party of Vietnam on Sunday decided to give General Secretary Nguyen Phu Trong an unprecedented third five-year term as the nation's top leader.

The decision, made at the party's 13th National Congress, recognizes that Trong has stably managed state affairs, including the containment of the novel coronavirus and management of an anti-corruption campaign against senior officials and executives of state-run business enterprises.

Trong, 76, will be the party's first general secretary to gain a third term since Vietnam was reunified in 1976.

The party holds its national congress roughly every five years. Trong was introduced by the members of the Politburo, the party's executive committee, and the nomination was then voted on by the 200 new members of the Central Committee, who will retain their posts for the next five years.

Party rules limit general secretaries to serving two five-year terms. Although changing the rules was considered necessary to give Trong a third term, the party decided to instead make an exception.

Trong was widely expected to retire after serving out his second term because of concern about his age and health problems; he suffered a mild stroke in April 2019. But calls to maintain the party's status quo increased among members amid growing uncertainties in the international arena, particularly in regard to the U.S. and China battling for hegemony. 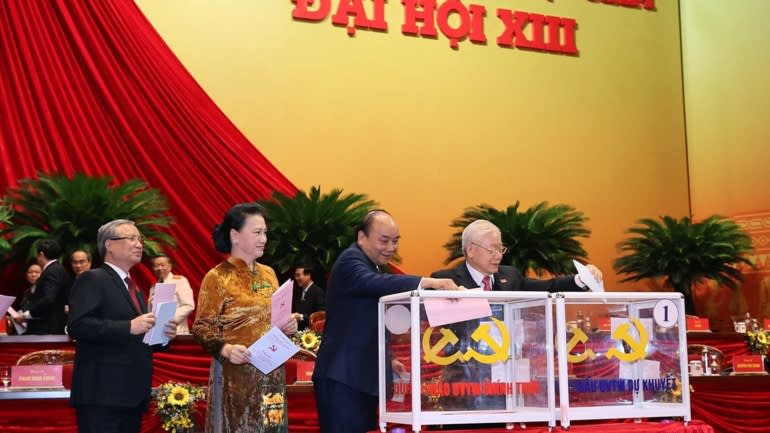 Trong was credited for his leadership in 2020, when Vietnam achieved economic growth while also beating back the spread of the coronavirus. Vietnam has counted 1,739 COVID-19 infections on Saturday since the initial outbreak last year, many fewer than some other Southeast Asian countries.

In 2011, Trong assumed his current post after serving as party secretary of Hanoi and as chair of the national assembly.

A conservative heavyweight, Trong has been spearheading a campaign to stamp out corruption among party leaders. At the 2016 national congress, Trong was elected to his second term after forcing then Prime Minister Nguyen Tan Dung -- a reform-minded leader who was seeking to take over the post of general secretary -- into retirement.

Trong's selection came earlier than expected as surge of COVID-19 was detected in several northern provinces. Local media reported the congress will end on Monday, a day earlier than previously scheduled.

The party is under the collective leadership of the Politburo's "four pillars" -- the party general secretary, the nation's president, the nation's prime minister and the chair of the unicameral national assembly.

The post of president, which Trong had concurrently held after having assumed it in 2018 due to his predecessor's death, is expected to be taken by Prime Minister Nguyen Xuan Phuc, 66.

Vuong Dinh Hue, 63, the party secretary for Hanoi and a former deputy prime minister, will become the chair of the national assembly.

The three positions will be officially decided when the next national assembly is convened after the congress. Tran Quoc Vuong, a standing member of the party secretariat who was seen as a potential candidate to succeed Trong, is expected to retire.

The selection of Vietnam's pillars usually takes into account a geographic balance -- representation from northern, central and southern Vietnam. While the post of general secretary often goes to a leader from the north, which won the country's Civil War, or resistance war against the U.S. from the Vietnamese point of view, the three other posts are shared among officials from each of the three regions.

But the new lineup includes two officials from northern Vietnam, including Trong, and two from the central part of the country.

Southern Vietnam was shut out, which might arouse complaints from the nation's commercial hub of Ho Chi Minh City.

"Trong will continue his current domestic agenda, focusing on party building. As such, we should expect his high-profile anti-corruption campaign to continue," Le Hong Hiep, a fellow at the ISEAS-Yusof Ishak Institute in Singapore told Nikkei Asia.

A major priority for Trong will be to develop a new leadership team to be elected at the next party congress as the party needs to avoid the personnel problems he faced in the current session, Hiep said.

"Most importantly, he will have to groom a successor to take over his position, and to build a broad consensus for his choice," he added. "What we should watch closely for in the next few years is how long Trong will stay and who will take over his position if he steps down before the end of his new term."

Vietnam, which has a population of 100 million, managed 2.9% growth in 2020 and is drawing strong attention from global manufacturers looking to it as a possible hub in a strengthening Southeast Asian supply chain. Having a long border with China, Vietnam is increasing its geopolitical importance as a front line where national interests of the U.S. and China are crossed.

The shape of Vietnam's new leadership team had been drawing attention from the U.S., China and the rest of Asia.

"The decision [to retain Trong] will have little implication for Vietnam's foreign policy in general and its relations with the United States and China in particular," Hiep said.

"Vietnam will maintain its current foreign policy trajectory, pursuing strategic diversification and international economic integration, while deepening ties with the major powers and supporting the role of ASEAN," he added. "It will also try to maintain a fine balance between the U.S. and China, as both countries are important to Vietnam's security and economic well-being."