Vietnam promotes Can Tho to special city, focusing on Mekong Delta HANOI -- Vietnam is granting Can Tho, on the Mekong Delta, a special status to draw investment amid China's growing presence in the country and the South China Sea.

The National Assembly approved the plan to promote the southern city on Tuesday. With this resolution, Hanoi will grant the city increased autonomy to issue local government bonds and retain more of its budget for its own development rather than contributing to the government's coffers. More flexibility will be granted in the area of city planning on a trial basis.

The resolution will take effect on March 1 and be implemented for five years.

Can Tho, with a population of 1.2 million, will become a "core city of the Mekong Delta region" by 2030, according to the resolution. Vietnam intends to draw investments totaling dozens of billions of dollars, according to the blueprint for 2022 to 2030. Despite its growth potential, the city has been lagging behind Haiphong and Danang in terms of development as Hanoi prioritized investment in northern cities.

Under the resolution, Vietnam will implement special mechanisms and policies to feature Can Tho as gateway of the lower Mekong region, connecting Vietnam with Cambodia and Laos. Hanoi plans to promote Can Tho as a core green city engaged in agriculture and environmental businesses, taking advantage of its location in the Mekong Delta, the biggest farming region in the country.

Can Tho's promotion is driven by its geopolitical importance, experts say. The city sits near Cambodian coastal city of Sihanoukville, where China is backing an expansion of facilities to boost its presence in the South China Sea. Dang Tam Chanh, a Ho Chi Minh City-based political analyst, told Nikkei that although Hanoi had intended to develop the region for decades, all resources had been directed toward improving the northern part of the country for the sake of better connections with the Chinese market.

However, China's maritime expansion in the South China Sea and the greater influence of China on Cambodia recently forced Vietnam to re-prioritize its resources and forces toward the Mekong Delta region.

"This is the right time for Hanoi to consolidate and upgrade Can Tho and the Mekong Delta for better balancing the connection with other neighboring countries -- especially in the Mekong River region -- with deeper cooperation with the U.S.," Chanh said. "This paves the way for partners to enhance their investment and present in the region where they could at least counter the influence of China in the region." 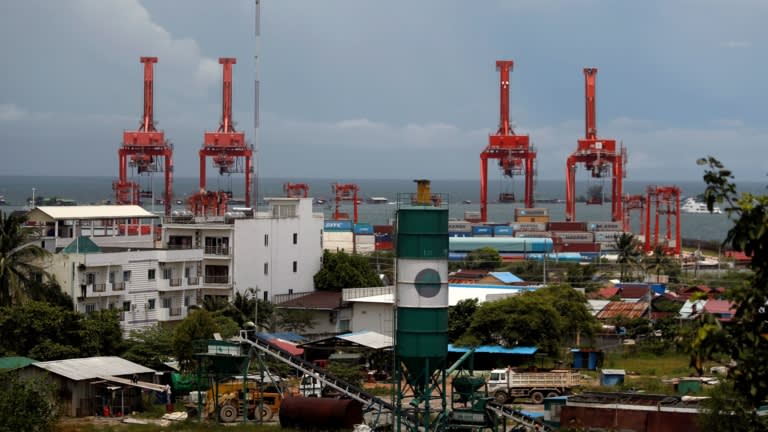 China has invested heavily in ports and other facilities in Sihanoukville in Cambodia to boost its presence in the South China Sea.   © Reuters

Political analysts point out that U.S.-led allies have wanted to create a corridor connecting the south of Vietnam to Cambodia and Thailand for decades but Vietnam was concentrating on the northern corridor until recently.

"With better roads, airport, water port and a new railway, Can Tho is set to confirm its importance as a main political, economic and cultural hub capable of responding to the challenges of political, geo-security and climate change issues in the Mekong Delta and beyond," said Ha Hoang Hop, a visiting senior fellow at Singaporean research group ISEAS-Yusof Ishak Institute.

The U.S. and Vietnam have had important areas of cooperation in developing the Mekong Delta for years. During a visit to Vietnam last August, Vice President Kamala Harris also mentioned supporting projects for more sustainable development in the region. Significantly, U.S. allies, including Japan and Australia, have been enhancing investment in both public and private services in the region directed toward infrastructure, the environment and pandemic recovery.

After the Mekong Australia Partnership was established in 2020, a special counselor for Vietnam's Mekong region was appointed in order to enhance Australian investment and cooperation over the delta.

Further cooperation is expected to be carried out during the tenure of Prime Minister Pham Minh Chinh, such as a railway connecting Can Tho to Ho Chi Minh City, north-south expressways and projects on adapting to climate change and developing sustainable agriculture.

The promotion of Can Tho also highlights Hanoi's intention to overcome the negative impact of waves of COVID-19. Vietnam's real gross domestic product slowed to 2.58% in 2021, failing to meet the target of 6.5%.

The move will mobilize sources from both domestic and foreign investors such as local government bonds, development credits and private loans, according to Ha Hoang Hop, and the amount could reach billions of dollars in five years.

The promotion of Can Tho will also help speed up urbanization in the Mekong Delta region, which has been slower than in other regions, Anh Pham, an independent business growth and strategy adviser, told Nikkei.