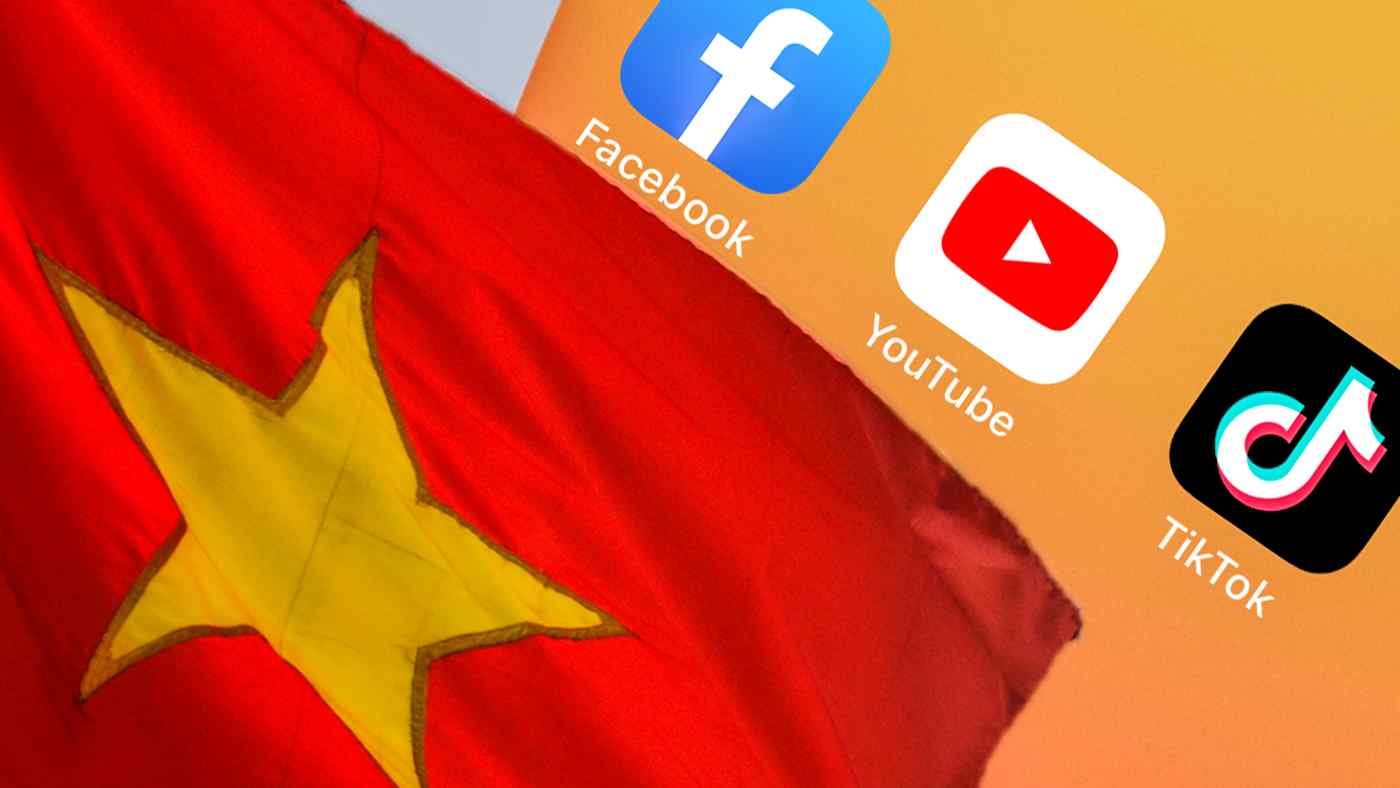 HANOI -- Vietnam's government is set to impose new regulations targeting popular livestreaming content on social media, including Facebook, YouTube and TikTok, in its latest effort to crack down on internet content that it believes threatens stability in the communist country.

The draft decree proposed by the Ministry of Information and Communications earlier this month is set to take effect after gathering public feedback and signing by Prime Minister Pham Minh Chinh.

While the decree covers domestic social media operators such as Zalo, based in Ho Chi Minh City, a lot of popular livestreaming content is offered through foreign companies.

The ministry estimates that as of the end of June, the top 10 Vietnamese social media platforms had a total of around 80 million users. But the industry is dominated by foreign players such as Facebook, with 65 million users; YouTube, with 60 million users; and TikTok, which has 20 million.

Social media platforms will also be asked to block or remove flagged content within 24 hours of receiving "justified" requests from individuals and organizations affected by such content.

"Ministries, branches and localities are responsible for determining the infringing content, based on their management fields. They will report to the Ministry of Information and Communications. The ministry is in charge of requesting cross-border enterprises to handle and remove infringing information," the ministry says. Individual users and organizations in Vietnam also have the right to notify the ministry of potential violations. They can file lawsuits if their legitimate rights and interests ... are affected by the cross-border services, according to the draft decree.

The decree comes two and a half years after Hanoi enacted a cybersecurity law in January 2019. That law sparked criticism from human rights activists and internet companies, who say it allows authorities to restrict free speech.

The new regulations will be imposed as the COVID-19 pandemic and other social issues are weighing on the communist country.

Several Facebook users in Vietnam have shared news about street protests in fellow communist country Cuba. Poly me phim, a social media personality with 69,046 Facebook followers; Do Trung Quan, a well-known poet with more than 35,000 followers; and blogger Nguyen Huu Vinh, with more than 20,000 followers, all took up the Sunday protests in Havana as U.S. president Joe Biden on Monday called on the communist government to meet the demands of protesters, who staged the island's biggest demonstrations in decades.

In June, Nguyen Phuong Hang, a businesswoman in Ho Chi Minh City, stopped livestreaming on Facebook after receiving a warning from city authorities. Her livestreaming attracted as many as 300,000 viewers as she accused several celebrities of wrongdoing of various sorts.

Hang took the Vietnamese online community by storm with her provocative content until authorities warned her off. They had received complaints from the city's Stage Artists Association that Hang had continually insulted and slandered many artists in her livestreaming sessions.

Should the decree take effect, more online content that is deemed fake news by the authorities is expected to come under pressure. "Many individuals and organizations take advantage of social media to perform press activities, and [of] online streaming to provide false information," the Ministry of Information and Communications said in a document attached to the draft decree. The ministry vowed to take action against online content that disseminates "insults to the reputation and dignity of other organizations and individuals."

With the new decree, Hanoi also wants to tax those who make money from livestreaming and related trading activities, Chinh said. Vietnamese authorities complain they are loosing billions of dollars in revenue because taxes are not levied on goods and services sold via livestreams in the country.

The ministry said it proposed the draft decree to regulate participants and prevent cross-border providers from taking advantage of Vietnam's markets and customers without paying their fair share of tax.