Who is Yuriko Koike?

Koike, 64, became the first female governor of Tokyo, home to 13.7 million people, in August 2016. Her agenda has included preparing for the 2020 Olympics and Paralympics, sorting out issues related to the relocation of the famous Tsukiji fish market and laying the political groundwork to help Tokyo rise as an international financial center.

Her drive for government transparency has gathered support from citizens. 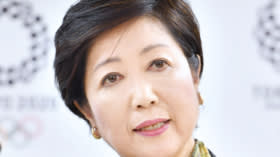 Though a member of the ruling Liberal Democratic Party at the time, Koike ran in last year's gubernatorial election without backing from the party. In January, she formed her own political group, Tomin First no Kai, to help advance her policies. In June, ahead of Sunday's assembly election, she submitted a notice of resignation from the LDP.

Koike's career is unique among politicians. She graduated from the Cairo University of Egypt in 1976 and speaks Arabic. After working as a newscaster in Japan, she was elected to the national Diet in 1992. She became environment minister in 2003 and defense minister in 2007. She uses the color green in her promotional material, partly as a reminder that she once served as environment minister.