Why Myanmar's military is not planning a coup Myanmar's armed forces at their annual military parade and ceremony to mark Armed Forces Day in the capital, Naypyitaw, on March 27. (Photo by Steve Tickner).
CopyCopied

Myanmar has always encouraged conspiracy theories. Most have proven fanciful, but there is one currently circulating that, given its potential implications, is worth examining. It argues that the leaders of the country's armed forces, or Tatmadaw, have a secret plan to bring down Aung San Suu Kyi's National League for Democracy government and install a new military regime. Military officers sign into the upper parliament for the swearing in of the new NLD-led government in Naypyitaw on March 30, 2016 (Photo by Steve Tickner)

This theory was given fresh life recently by media coverage of the first anniversary of the NLD taking office in March 2016 and the appointment shortly afterwards of Suu Kyi as Myanmar's State Counselor and de facto leader. Both milestones prompted a spate of reviews which, almost without exception, expressed disappointment with the NLD's first year in power. Suu Kyi herself came in for strong criticism, particularly from foreign observers upset by her refusal to intervene on behalf of the mostly stateless Muslim Rohingya population based mainly in the country's western Rakhine State. Tatmadaw soldiers moving into the Kokang region of north-eastern Myanmar during clashes with ethnic forces in July 2015. (Photo by Steve Tickner)

Following such reviews, Suu Kyi's supporters and apologists for her government leaped to their defense, arguing that it was too early to judge the new administration. They pointed to the complex problems the NLD inherited last year, some of which date back to colonial days. Some commentators sought to deflect criticism from Suu Kyi to the armed forces, which they saw as the root cause of all her problems.

A few went even further, claiming that in various ways the Tatmadaw had deliberately sabotaged Suu Kyi's government. They suggested that this was always the generals' plan. In the view of these pundits, ever since the NLD took office the armed forces had played a spoiling role, both to deny the civilian government a chance to establish itself, and to persuade Myanmar's people that only a strong military regime could deliver the sweeping changes they desired.

It is true that, despite the transition to a more democratic system, the Tatmadaw is arguably still the most powerful political force in Myanmar. It is allocated a quarter of all seats in the national parliament. Also, it directly controls three key ministries and, indirectly, the powerful National Defence and Security Council. Myanmar's economy and bureaucracy are still dominated by serving and former military officers.

If the generals do have a long-term plan to cripple or even bring down the NLD government, then they have the means. However, the only plan we can be sure of is the one that helped the NLD take office. 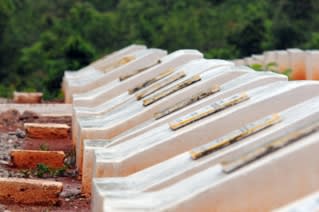 The graves of Tatmadaw soldiers killed in clashes with ethnic armed forces in the Kokang region of Myanmar in July 2015. (Photo by Steve Tickner)

There is no doubt that political developments in Myanmar over the past decade or so have conformed to a blueprint developed by the former military government. First announced in 2003 by then Prime Minister Khin Nyunt, it consisted of a seven-step plan that the regime referred to as its "roadmap to discipline-flourishing democracy."

Everything according to plan

The first step was to the recall of the National Convention (formed in 1992 draft a new constitution), which had been suspended since 1996. The second and third steps were the implementation of a scheme to introduce a more democratic system and the drafting of a new constitution. The fourth and fifth steps were a national referendum to endorse the constitution and the election of the legislative bodies proposed under the plan. The sixth step was to convene the new parliament.

The last step was described as the construction of "a modern, developed and democratic nation."

Setting aside questions about the nature of this process and the final result, it can be argued that the military regime did precisely what it promised to do. The roadmap was followed closely. A new constitution, drafted by the National Convention, was endorsed by a carefully managed referendum in 2008. Elections were held in 2010, the new members of parliament were sworn in the following year, and former general Thein Sein was elected president soon afterwards.

In addition, by-elections were staged in 2012, in which NLD candidates, including Suu Kyi, won 43 of the 45 available seats. In 2015, general elections were held which, by all accounts, were reasonably free and fair. The NLD swept the board, winning 86% of the contested seats in the national parliament. Under the 2008 constitution, Suu Kyi could not take the top job, but she found a loophole which enabled her to assume a position "above" the new president.

This remarkable transformation of Myanmar's political landscape occurred because the Tatmadaw's high command permitted it to do so. The generals could have stopped or manipulated the process at any stage. They may not have expected Thein Sein's reforms to be so extensive, and the creation of the State Counselor's position took them by surprise. However, the generals must have anticipated that Suu Kyi would lead the NLD to power in 2015 and become the country's de facto leader.

To that extent, the Tatmadaw's master plan has been implemented. However, the argument that the generals wanted to see the NLD win power simply so that they could see it fail, thus demonstrating the inability of civilians to govern Myanmar and to reveal Suu Kyi's personal and political weaknesses, is unconvincing.

Since she took office, Suu Kyi has been frustrated by the continuing influence of the armed forces. The military bloc in parliament has blocked her attempts to amend the constitution. Being independent in all matters relating to national security, the Tatmadaw has been free to conduct counter-insurgency campaigns against armed ethnic groups in northern Myanmar. The army and police have also launched harsh "clearing operations" against Rohingya communities in Rakhine State.

The Tatmadaw's prerogatives thus effectively place Suu Kyi's "21st century Panglong" peace process, aimed at achieving a comprehensive settlement with about 20 ethnic armed groups, in the hands of the generals, who favor a hard line. The brutal tactics employed in Rakhine State have exposed Myanmar to scathing international criticisms. Suu Kyi and her government have been left looking weak and ineffectual, if not actually complicit in human rights abuses.

The more incompetent and unsympathetic the civilian government appears , the conspiracy theory goes, the greater will be the demand for a more decisive and efficient military regime.

This argument, however, fails to recognize that the NLD is responsible for many of its own problems. It took office with few detailed policies or strategies for change. None of its parliamentarians had prior experience in government. New initiatives have not been coordinated well and public relations have been poorly handled. Suu Kyi's remoteness, imperious style and tendency to micromanage have caused resentment and inefficiencies. Her refusal publicly to address the Rohingya crisis has undermined both her own international standing, and that of her government.

The conspiracy theorists also overlook the fact that the generals did not have to give up power in 2011. They were not forced to do so by military defeat or external pressure. Indeed, the regime was more powerful than at any time since the 1962 coup. They could have continued to run the country. Yet the generals seem to have concluded that the country's interests and their own were best served by a semi-civilian government that was more popular, could attract foreign investment and win international support.

The generals do not want to run Myanmar -- at least not directly. They are determined to protect the Tatmadaw and its central place in national life, and they would respond to any challenges to the country's unity, stability and sovereignty -- the former regime's three "national causes." However, within those bounds they want the NLD government to succeed as they share many of its goals. They have made it clear that they too want Myanmar to be strong, modern, prosperous, stable, united, independent and respected.

There are doubtless some members of the armed forces who regret their loss of power and take satisfaction from the NLD's current troubles. There are probably contingency plans for the Tatmadaw to take back control of the country in an emergency. However, the high command seems content to leave the difficult and messy business of governing to the NLD, while keeping a watchful eye on key areas of interest and reaping the rewards on offer, such as economic opportunities and foreign military contacts.

So, to answer the conspiracy theorists: yes, there was a plan by the generals. It was to step back from day-to-day government and allow a transition to a more democratic system, albeit one in which the Tatmadaw still exercised considerable influence. But the argument that the generals have a second secret plan deliberately to make Suu Kyi's government fail, lacks credibility. That would defeat the purpose of the first.

Senior General Min Aung Hlaing, the commander in chief, has indicated that the Tatmadaw will let the current government see out its first term. After that, it is difficult to predict what will happen. One scenario favored by some Myanmar watchers is for a revitalized pro-military party, possibly even led by Min Aung Hlaing himself, to contest the next national elections. Should that occur, then no one should be surprised to hear its candidates point to the failure of the NLD and its leader to meet popular expectations.

Andrew Selth is an adjunct associate professor at the Griffith Asia Institute. His latest book is Burma, Kipling and Western Music: The Riff from Mandalay (New York: Routledge, 2017)