JAKARTA -- There is a sense of urgency in Indonesian President Joko Widodo's appointment of new members to his Cabinet -- notably in the selection of the high-profile managing director of the World Bank, Sri Mulyani Indrawati.

Indonesia's economic growth has been slower than expected, infrastructure development -- intended to leverage the economy -- has been sluggish, while tax revenue is falling short of ambitious targets.

Poor coordination among ministries has been partially blamed for hampering many important infrastructure projects. In the meantime, Widodo's new flagship policy to boost tax revenues to finance development projects -- a tax amnesty -- is progressing very slowly.

It is against this background that Widodo announced on Wednesday his new Cabinet lineup -- which includes major changes in the economic team.

"I want all the ministers, all heads of government institutions to work faster, to work more effectively, in a team that is solid and is supportive to one another," Widodo told a Cabinet meeting less than two hours after nine new ministers were sworn in.

The biggest name appointed to the revised Cabinet was Indrawati, who served as finance minister from 2005 to 2010 during an earlier administration led by President Susilo Bambang Yudhoyono.

Indrawati on Wednesday said she has resigned from the World Bank to accept Widodo's offer of the Cabinet post. She has already been given the task of ensuring successful implementation of the tax amnesty law. 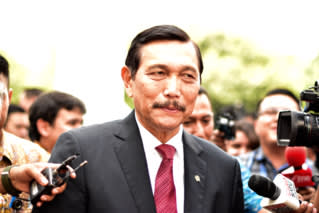 "I'm extending warnings to the tax director general and the finance minister in regards to many complaints about tax amnesty services. Some people said they came to a tax office only to find no one to explain, or to find officers who cannot explain things in details," Widodo said, urging the new minister to fix such problems immediately.

The appointment of Indrawati, who has featured regularly in Forbes magazine's list of the 100 most powerful women in the world, won widespread applause.

"Her appointment was a pleasant surprise, and already today the markets have reacted positively," he said. The benchmark Jakarta Composite Index closed 0.96% higher on Wednesday, ending at its highest level in 14 months.

Hanan said that in the light of her success in reforming the bureaucracy in the past, Indrawati will probably be expected to help Widodo to remove counterproductive regulations that have hampered investment and infrastructure development.

Despite the largely positive reception, some said that Indrawati's alleged role in approving a bailout for then-ailing Bank Century in 2008 could pose a threat to her job in the future. The case became a scandal after former executives of the bank were reported to police for fraud. Indrawati took the World Bank job in 2010, in the middle of an intense parliamentary inquiry into the case.

Apart from Indrawati, Widodo appointed Archandra Tahar, president of U.S.-based oil consultant Petroneering as the new energy minister. The post of trade minister was given to Enggartiasto Lukita, a senior businessman and politician from the National Democratic Party.

Observers said these appointments were intended to improve coordination in the Cabinet. Among the ministers sacked are some who have been widely reported as engaging in disputes with one another, while the new appointees are seen as people who have greater capacity to lead or coordinate.

Said also has been reported as having strained relations with State Enterprise Minister Rini Soemarno over the government's 35 gigawatt electricity procurement project. Soemarno, a close aide to Widodo, retains her position in the Cabinet.

Former Trade Minister Thomas Lembong, meanwhile, albeit widely regarded as a professional, is seen as having poor coordination skills with other ministries -- and is blamed for failing to stabilize the prices of beef and some staple foods during his term in office.

Leo Rinaldy, an economist at local brokerage Mandiri Sekuritas, was cautious in his assessment of the new Cabinet lineup, especially in regards to Indrawati.

"Hoping that she will change the situation overnight is naive," Rinaldy said. "Her track record speaks for itself. She is no doubt the right person [for the job] but changes will only come in the medium to long term."

An executive at a local asset management firm, meanwhile, said, "It's a structural adjustment that is needed," pointing to calls for improvements to Indonesia's tax system to maximize tax revenue.

Although the main focus of the reshuffle was economic, politics played a part, with Widodo having to ensure that a wide range of parties and factions are accommodated in the Cabinet. "There is a lot of political consolidation now," said Home Affairs Minister Tjahjo Kumolo, one of those who retained his post in the reshuffle.

One appointment that could prompt controversy internationally is the selection of Wiranto -- a former general who was indicted by the United Nations in 2003 for crimes against humanity during Indonesia's 1975-99 occupation of East Timor -- as coordinating minister for politics, law and security.

Head of the Hanura party, Wiranto was tipped to be named a minister in Widodo's initial Cabinet in 2014 after the presidential election that year. Widodo's selection of Wiranto this time around is likely down to his party having to cede positions elsewhere in the reshuffle.

"The senior person from the party needed in the Cabinet, to compensate in the reshuffle, is Wiranto," said political observer Djayadi Hanan.

The man Wiranto replaces as Widodo's chief security minister, Luhut Pandjaitan, will move to an internationally sensitive post, overseeing the maritime affairs of the world's biggest archipelagic country at a time of growing tensions over the South China Sea.

"The president wants to increase confidence in the political and security situation in the country," Pandjaitan told the Nikkei Asian Review after the reshuffle was announced.

The reshuffle comes ahead of the expected execution of 14 accused drug traffickers later this week -- the first such punishments since two controversial rounds of shootings, by firing squad, of foreign drug peddlers in early 2015. Those executions strained Indonesia's relations with neighboring Australia and former colonial power The Netherlands, after citizens of both countries were among those executed.

Citizens of India, Nigeria, Pakistan and South Africa are among those to be executed this time around. Kumolo would not comment on whether Indonesia was concerned that relations with those countries would be jeopardized, but said that Indonesia works closely with neighboring countries on key issues.