JAKARTA -- A subdued performance from Joko Widodo's running mate in the first televised election debate has raised questions over his ability to support the Indonesian president's bid for re-election in April -- and inspired a flood of memes.

Senior cleric Ma'ruf Amin was noticeably quiet during much of the two-hour debate, which was organized by the General Elections Commission and broadcast live on Thursday evening.

The 75-year-old let Widodo answer nearly all of the questions and argue alone with the rival ticket -- former Gen. Prabowo Subianto and his businessman running mate Sandiaga Uno, who added to each other's comments and displayed a more polished team performance.

"[The answer] is sufficient. I agree with Pak Jokowi's statement," Amin said calmly when the moderator invited him to add to comments made by Widodo regarding law enforcement. He used the word "sufficient" on two other occasions.

"Ma'ruf Amin represents all of us introverts," joked one twitter user in a message that was retweeted 1,000 times. Another showed a crowd standing up and yelling "Hooraaay!!!!!" when Amin finally responded to a question.

Other observers were more direct in their appraisal.

The opposition, however, have been hesitant to criticize Amin. His position as the nonactive chairman of the Indonesian Ulema Council, the country's top Muslim clerical body, means that attacking him directly would risk alienating conservative voters. 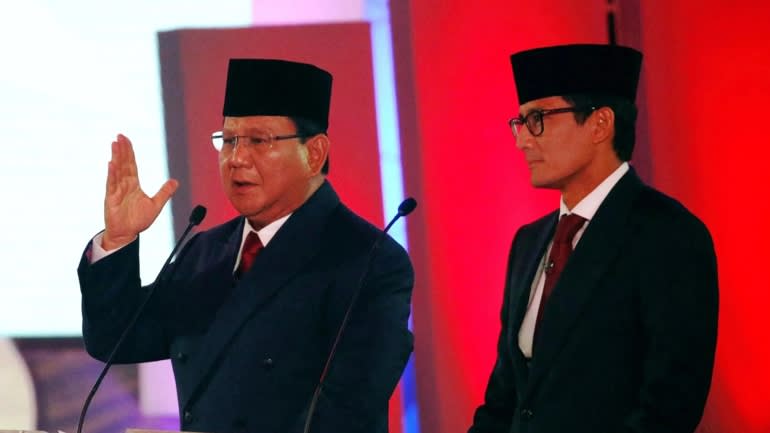 Opposition candidate Prabowo Subianto, left, and his running mate Sandiaga Uno were said to have worked together more coherently during the debate in Jakarta.   © Reuters

One senior opposition leader, Amien Rais, did refer to Amin's showing, although his comments were far from scathing. "I saw something prominent ... that Ma'ruf Amin played nearly no roles," he said.

Current Vice President Jusuf Kalla came to his colleague's defense. "That is how a vice president should be. It is understandable that the president [speaks] more than the vice president," said Kalla, who has a reputation for being outspoken.

Erick Thohir, the head of the Widodo-Amin campaign team, said they had arranged for Amin to answer questions related to terrorism, a topic that only came out in the second half of the debate. "We will see his roles more in the next debates," he said.

Amin's performance has led to some anxiety among Widodo supporters, especially when contrasted with the swift responses provided by the younger and more energetic Uno.

Political observer Djayadi Hanan, however, said Thursday night's debate will likely have little impact, as will the four others scheduled before the April 17 vote.

"Debates will commonly increase or reduce candidates' electability by two or three percent -- that is if we can see the clear winners," said the executive director of pollster Saiful Mujani Research and Consulting. "I didn't see a clear winner last night. I think it's a draw given the two tickets' mediocre performances."

Going by recent polls, he added, the effect a running mate has on a presidential candidate's electability is "arguable."