Infrastructure investment and regional development have much further to go 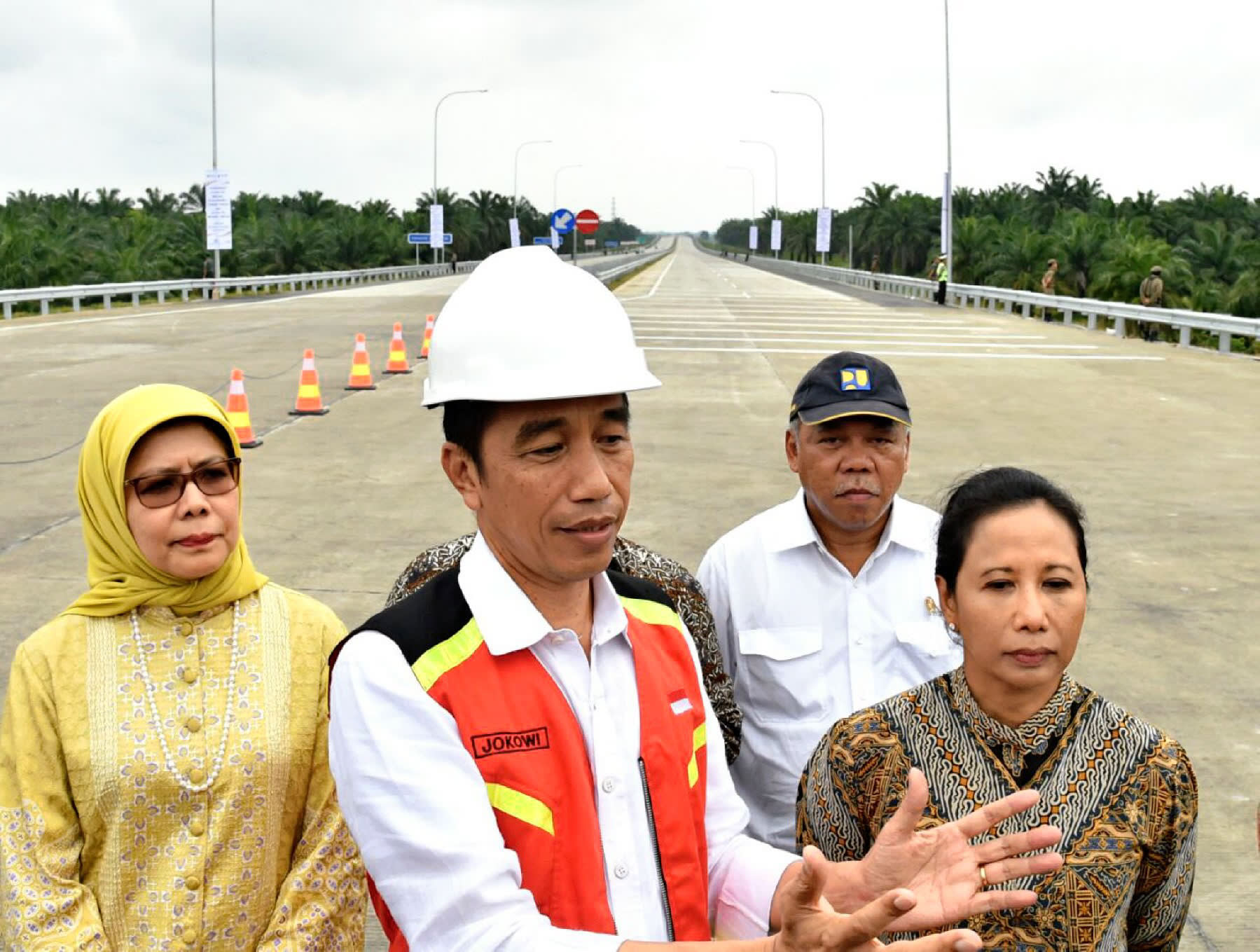 JAKARTA Indonesian President Joko Widodo marked three years in office on Oct. 20. He swept into power on strong support from the poor and on pledges of spurring economic development through boosted infrastructure spending.

So far, he has achieved some success. Recent data show that the gap between rich and poor is narrowing and Indonesia's economy is growing at a stable pace of around 5%. But when Widodo took office, he had targeted 7% growth. For 2017, the government tempered expectations to target economic expansion of 5.4%, but it is missing even that.

The government had planned to invest a total of 3.7 quadrillion rupiah ($273.65 billion), raised from the public and private sectors, for so-called national priority projects during Widodo's five-year term. But the amount disbursed as of June this year totaled just 1.6 quadrillion rupiah, according to the Indonesia Investment Coordinating Board, representing just 43% of funds required to back these projects with only two more years of this administration to go.

This funding shortfall is a problem. A high-profile, Chinese-supported high-speed railway project has made no headway due to a lack of funds, despite the groundbreaking ceremony held in January 2016.

The construction of electric power plants is another example. The administration had plans to build power plants capable of generating a total of 35 million kilowatts. It now seems that Widodo's plan to achieve this in five years may have been too ambitious.

So far, Indonesia has only managed to build 40% of the plants under the power generation project, and of this, some are still under construction, according to Indonesian utility PLN.

The Indonesian government has expressed its intention of relying on private funds for the development of Java, the island that includes Jakarta, and allocating government funds to regional development. But it is difficult to have private companies accept risks in long-term projects requiring huge investments, market participants said. The president of a local Japanese-affiliated company also pointed out that leaving everything to private companies may not be the best way forward.

To be sure, Indonesia has not had any difficulty raising money in international markets. It successfully raised $2 billion in the bond market in July, soon after Standard & Poor's raised its credit rating to investment-grade BBB- in May. However, there is little room for the government to raise more money, because a law sets a maximum budget deficit limit of 3% of gross domestic product to maintain fiscal discipline. This year's budget deficit is likely to come to around 2.9%.

Despite the infrastructure snags, Widodo remains popular in part because he has also focused on developing regions such as the country's portion of New Guinea and remote islands. A senior official said that unlike previous leaders, Widodo often travels to other parts of the country and sometimes spends just two to three days of the week in Jakarta.

This has been recognized and appreciated by the citizens in Nunukan, an island in North Kalimantan Province some 1,700km away from Jakarta. Here, Widodo is affectionately called by his nickname Jokowi. "Goods have become abundant thanks to Jokowi," one resident said, sharing a widely held sentiment.

Under Widodo, ports have been expanded and roads improved on Nunukan. The cost of product distribution has also dropped, while the movement of people and labor has increased. Restaurants in the town proudly display photos of Widodo visiting the island in December 2014.

Widodo's government has also cut gasoline subsidies, which were seen to be only benefiting the comparatively well-off, and redirecting those funds to infrastructure development. Coordinating Minister for Economic Affairs Darmin Nasution said recently that the change reflected the Widodo administration's commitment to an equitable economic policy that did not benefit only the wealthy who could afford cars and motorbikes. 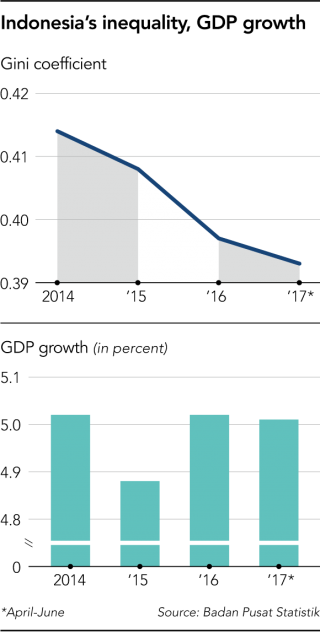 Such policy changes have borne fruit. Indonesia's Gini coefficient fell to 0.397 in 2016 from 0.414 in 2014, according to the government. The Gini ratio measures inequality, with zero representing perfect equality, while social turmoil is thought to occur frequently at 0.4 or above.

The poverty ratio has also dropped by 0.2 percentage point over the past year. The eastern Maluku and Papua regions, until now left behind in the economic development of Indonesia, achieved growth of more than 7% in 2016, topping Java's 5%.

TRUE TEST TO COME With all this, at the start of his fourth year, Widodo still has the support of a large population. A survey conducted on Sept. 9 by the Indonesia Center for Strategic and International Studies found that 56.9% of respondents are content with the Widodo administration's economic policies. Support ratings for the administration are also high, at around 50% to 70%, according to different opinion polls.

But the true test of Widodo's government will come over the next two years. Important local elections, such as gubernatorial races in the densely populated provinces of West and East Java, are scheduled for 2018.

In addition, the Asian Games, a major two-week athletics competition, will be held in Jakarta and Palembang in August 2018. A joint annual assembly of the International Monetary Fund and the World Bank will be held in Bali in October 2018.

These events will give the Widodo administration impetus to work toward its goals and to demonstrate the political and economic stability of Indonesia to the rest of the world. The president can serve up to two five-year terms, and with the presidential election scheduled for April 2019, Widodo will face a critical test of whether he can accelerate economic growth that benefits all Indonesians while also maintaining his popularity.