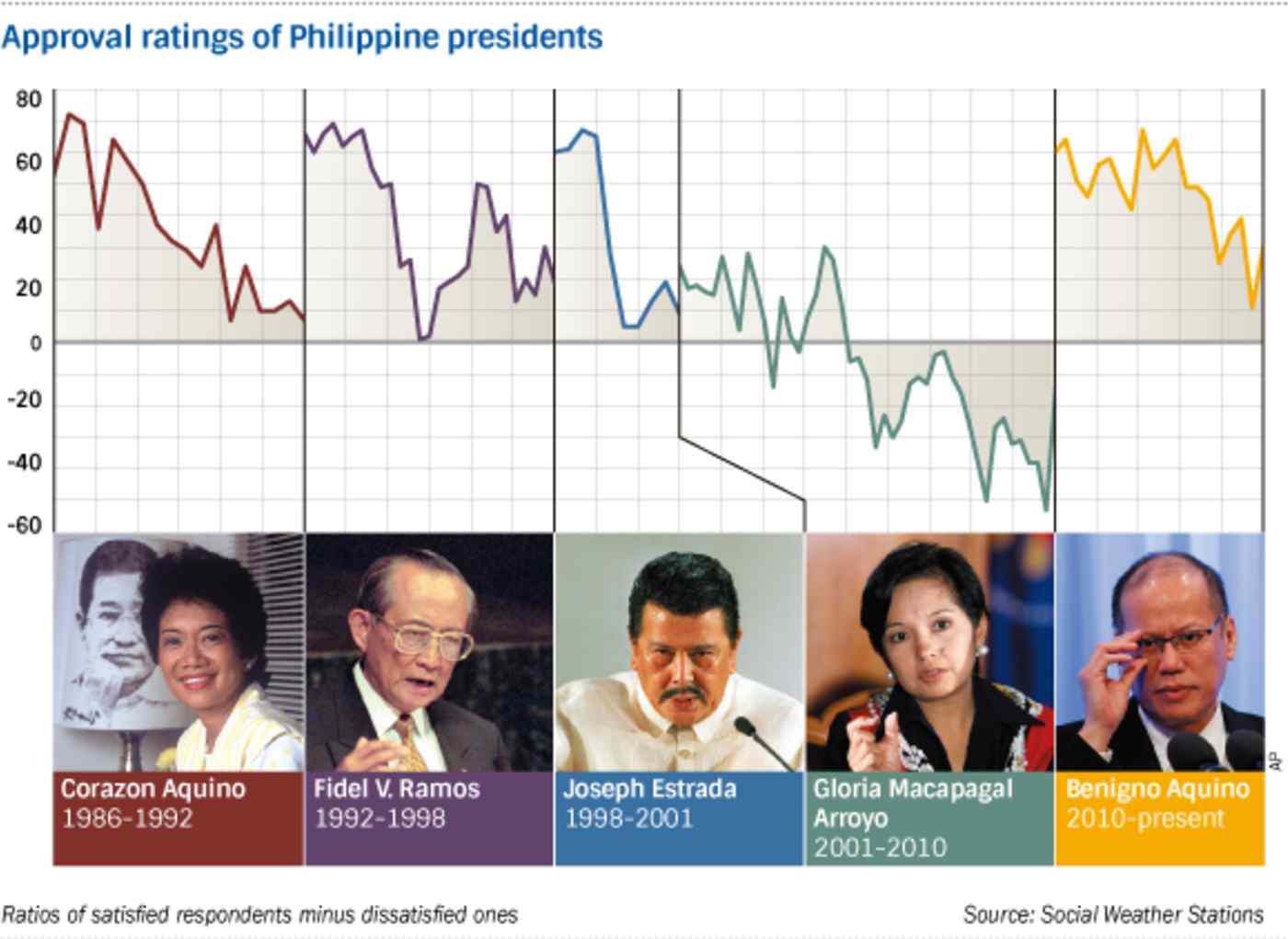 Less than a year before the Philippines elects a new president, the leadership race is gathering pace as contenders jockey for the chance to build on recent economic gains.

But personality-driven politics undermine recent reforms in the Philippines and threaten growth.

In the Philippines, parties are weak and fractious. Elections are huge popularity contests where victory is often determined by twists of fate.

In 1986, Corazon Aquino was propelled to the presidency after the murder of her husband Benigno Aquino Jr., an opposition leader. Similarly, her death in 2009 thrust her son, the younger Aquino, from newly arrived senator to president.

As president, Aquino has not only stoked growth but fought poverty and corruption.

Under one of his key programs aimed at alleviating poverty, cash grants were given to the poor in exchange for certain commitments. For example, parents had to keep their children in school, take them to clinics for checkups, or attend training sessions on topics such as how to manage finances. The ADB noted that such conditional cash transfers have helped more than 4 million families and described the program as "an increasingly effective weapon" for battling poverty in the Philippines.

Still, the country's unemployment rate of 6.4%, according to recent quarterly data, is among the highest in Southeast Asia. This forces millions of Filipinos to take up jobs overseas as domestic helpers or construction and factory workers.

As part of an Aquino-led anti-corruption drive, three senators have been in jail for a year now for taking large kickbacks from congressional funds. A chief justice was impeached for lying about his assets.

In 2014, international credit ratings agencies upgraded the Philippines to BBB with a stable outlook -- the highest rating the country has ever received. Standard & Poor's recently said a further upgrade may be considered if more institutional and structural reforms were implemented to increase investment and economic growth prospects.

The Philippine Congress, meanwhile, recently passed an antitrust law, two decades after it was first filed. The law is expected to increase competition and protect consumers.

Critics accuse Aquino of cronyism and for not being a visionary. Still, many regard his decision to go to an international arbitration court to assert the country's maritime rights over China as positive.

Many of Aquino's advances could be lost if the country selects a corrupt or ineffective new president.

So far, only Vice President Jejomar Binay has declared his candidacy. He served as mayor of Makati, the country's financial center in Manila, for nearly 20 years. Binay's biggest liability may be the widespread perception of corruption -- he faces graft charges for siphoning millions of Philippine pesos from large construction projects.

Sen. Grace Poe, the daughter of a famous movie actor, leads the polls ahead of Binay.

Poe does not belong to any political party but is part of the ruling coalition. In her two years in the Senate, she has championed food security and a freedom of information bill.

Other possible contenders include Rodrigo Duterte, mayor of the city of Davao, known for governing with an iron fist, and Interior Secretary Manuel Roxas, a technocrat and member of the same party as the president.

Duterte is credited with making Davao one of the safest and most competitive places in the country. He has openly supported same-sex marriage. Activists have criticized him for vigilante killings that took place during his early years as mayor.

Roxas, a graduate of the Wharton School in the U.S. and former investment banker, pushed the Philippines to be a business-process outsourcing hub when he was trade secretary. As interior secretary, he is credited with making the police more efficient and decreasing the crime rate in Manila. But some considered him indecisive when he was head of the Transportation and Communications Department.

Aquino's endorsement will be valuable, as he remains popular. He is one of two presidents to enjoy approval ratings of more than 50% in their fifth year in office and will possibly step down almost unscathed.

The danger is in a four-way race -- Binay, Poe, Roxas and Duterte -- resulting in a split vote that would increase the chances of a Binay victory. That outcome, some fear, could derail the Philippines from its growth track.

Marites D. Vitug is editor at large of Rappler and author of several books on Philippine affairs.