With disgraced-official playing cards, the 'big tigers' are wild

TOKYO -- The mug shots of corrupt officials are landing on card tables around China. This deck of playing cards features officials caught in the corruption dragnet, including Zhou Yongkang and Xu Caihou as the jokers.

A new deck of 54 playing cards is selling well. The cards are emblazoned with pictures and profiles of 54 people who were swept up in President Xi Jinping's anti-corruption dragnet. Representing the two jokers are Zhou Yongkang and Xu Caihou.

The Xi administration has been cracking down on both "tigers" and "flies" -- powerful leaders and low-level bureaucrats. Zhou and Xu were widely regarded as "big tigers."

Zhou, a former member of the Politburo Standing Committee, the Chinese Communist Party's top decision-making body, was found guilty of bribery and other crimes. He was sentenced in June to life in prison.

Xu, a former vice chairman of the Central Military Commission, the highest post for a uniformed officer, died of bladder cancer in March after being placed under investigation.

Ling Jihua, a close aide to former President Hu Jintao, is the 2 of spades. The ace of hearts card features Gu Junshan, a former deputy director of the People's Liberation Army's General Logistics Department, whose case triggered a wave of corruption probes into the military.

The deck includes just about all the tigers, big and small, who have fallen from grace, with the notable exception of Guo Boxiong -- another disgraced former vice chairman of the Central Military Commission. This is because his expulsion from the Communist Party was announced only recently, at the end of July.

The Chinese authorities do not appear to have signed off on the corrupt-official cards. But so far, they have not taken any action to stop sales, either. The Chinese president created a stir when he stopped by this Beijing shop, which sells steamed meat buns.

Sellers are anxious nonetheless. When asked about the deck online, one responded, "You are not a member of the Zhou Yongkang group, are you?"

The big fear is of retaliation by angry Zhou loyalists. Zhou controlled China's internal security apparatus, which includes the police, for many years. The sellers contacted for this article run shops in the cities of Nanjing and Lianyungang, both of which are in Zhou's home province of Jiangsu.

To be sure, a government clampdown on the cards is also a possibility. The Publicity Department of the Communist Party's Central Committee, which is in charge of controlling the media, is quick to jump on anything construed as a statement against the ruling party.

At the same time, however, the propaganda department has been at pains to boost Xi's popularity among the general public. This may explain why it is looking the other way as people snap up the cards.

Not everyone sees the decks as harmless fun.

"President Xi has established his public image as a champion of justice," said a grim-faced intellectual in Beijing. The sellers "are just taking advantage of Xi's high popularity to make money. They have gone too far in ignoring human rights, although the officials represented by the playing cards were corrupt."

The playing cards are not the only lighthearted phenomenon to emerge since Xi rose to power. Two songs praising Xi for having the common touch went viral on the Internet. One is titled "Ping Yi Jin Ren," which translates to "An Amiable and Approachable Person." The other's title translates to "Steamed Bun Shop."

The president once created a buzz with an unannounced visit to a Beijing vendor of steamed meat buns. Eating the inexpensive snack, apparently, was his way of showing he is attuned to the lives of ordinary people.

Since Mao Zedong's Cultural Revolution, a power struggle that ran from 1966 to 1976, the Communist Party has considered personality cults taboo. Songs and other tributes to particular leaders are frowned upon. But the tunes praising Xi -- who is also the party's general secretary -- have been spreading with, again, the authorities' tacit approval.

Xi-related videos have also been making the rounds. In them, the president and his wife, Peng Liyuan, are affectionately referred to as "Xi dada" and "Peng mama."

One animated clip was released online Aug. 1, 2014 -- the anniversary of the founding of the People's Liberation Army -- by a news site directly controlled by the Publicity Department. The title translates to "Xi Jinping Dressed in a Military Uniform." The video details the president's military background and shows him inspecting forces. At the climax, Xi and Peng, a well-known singer for the PLA, tie the knot.

The young Xi and Peng are seen holding hands within a heart. They "fell in love at first sight," the clip says.

Romance aside, the video sent a political message: Xi has long been close to the military, and he is now firmly in control.

Many taxi drivers in Beijing do not shy away from talking about politics. At the moment, they seem to be supporting Xi. The president's "tiger hunting is good," one driver said. "The former top leader did not do anything," the driver added, referring to Xi's predecessor, Hu. 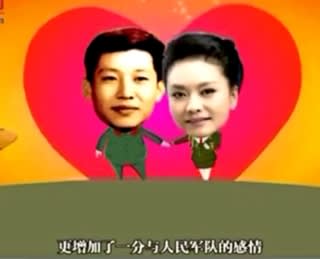 Xi has surely made plenty of enemies with his anti-corruption crusade. As long as the public is on his side, the president likely has little to worry about politically. But the positive vibes could fade as other concerns come to the fore -- such as the stock market's recent nosedive and the slowing economy.

The more these developments affect the lives of ordinary citizens, the more likely they will be to turn their backs on Xi. It will not be easy for the president to maintain his popularity until the Communist Party's next National Congress in 2017. Top leadership changes are made at these gatherings.

Of course, since the Communist Party controls everything, there are no surveys showing the president's approval rating. Unlike Japanese Prime Minister Shinzo Abe, Xi lacks a go-to number for gauging his political fortunes.

Still, like Abe, Xi is no doubt aware that losing the populace could sap his political power. Public support is the real wild card.