HONG KONG -- One question is gripping Samoa's divided public as they wait for a conclusion to the island nation's interminable post-election standoff: Where to from here?

The answer is likely to have significant bearing on the country's democratic future, as well as its relations with bigger Pacific players such as China and New Zealand.

Two starkly different prime ministers have claimed the top job. One is Tuilaepa Aiono Sailele Malielegaoi, leader since 1998 and a significant figure of Samoa's past, who has so far refused to relinquish control. The other is Fiame Naomi Mata'afa, winner of the April 9 election and a woman supporters say is the face of Samoa's future.

The head of state, Tuimalealiifano Va'aletoa Sualauvi II, on Monday urged "forgiveness" and "reconciliation." But he did not explain how he expects to achieve that, nor his reasoning for suspending the legislature.

Fiame was set to be sworn into parliament on May 24, after her Fa'atuatua i le Atua Samoa ua Tasi (FAST) party secured a one-seat advantage. But when the head of state declared a parliamentary freeze at the last minute, FAST was forced to appeal to the Supreme Court. Then, despite the court ruling in her favor, Fiame was locked out of the parliament building.

Her party carried out a swearing-in ceremony on the lawn outside, which Tuilaepa called "treason" and "illegal conduct."

The Supreme Court on Wednesday upheld an earlier decision to nix the election commission's appointment of an additional lawmaker under a female representation rule that would have resulted in a tie, Radio New Zealand reported, once again confirming FAST's majority. 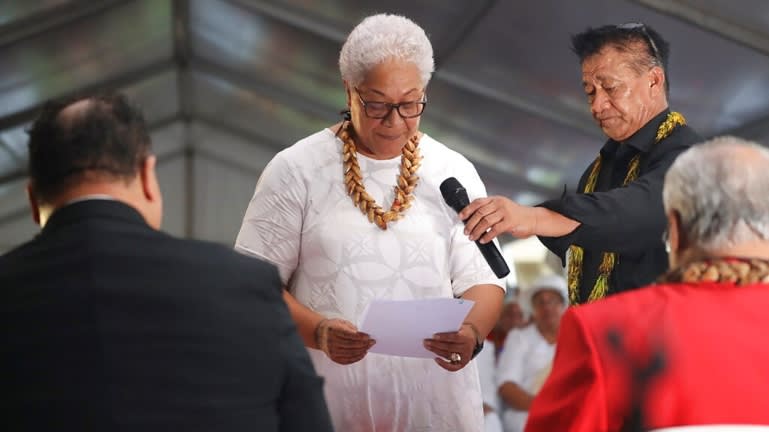 Samoa's Prime Minister-elect Fiame Naomi Mata'afa takes her oath at an unofficial ceremony outside parliament in Apia on May 24, after she was locked out.    © Samoa Observer via AP

Local institutions including the Samoa Law Society have thrown their weight behind Fiame. The society's president, Komisi Koria, recently told Australia's ABC: "She has the support of the law in terms of her claims to be prime minister."

The archbishop of the Catholic Church in Samoa, Alapati Lui Mataeliga, also professed support for the prime minister-elect during a recent sermon attended by Tuilaepa. "Your time is done," the archbishop said, addressing the caretaker PM directly, according to the Samoa Observer. Samoa is a deeply religious country, with 98% of the population identifying as Christian.

The next significant development is likely to occur later this week. Fiona Ey, a lawyer based in Samoa, said the Supreme Court is expected to hear a challenge this Friday filed by Tuilaepa's Human Rights Protection Party (HRPP), which will determine if Fiame's swearing-in ceremony was lawful.

There are also contempt proceedings filed against Tuilaepa and other petitions "bubbling away in the background" that could result in a different outcome altogether, she said. But Ey sees a trend of worrying attacks on Samoa's judiciary by Tuilaepa's HRPP Party.

"There's been this gradual deconstruction of democracy and undermining of rule of law in Samoa," she said, "and then that has now come to a head with what's happened in these elections."

Ey's husband is a Supreme Court judge, though he is not sitting at present.

Lefaoali'i Don Enari, a Samoan academic and high chief living in Australia, said that last week's developments saddened him "as a Samoan chief and a Samoan person, to see the prime minster-elect locked out of the parliament she was rightfully meant to enter."

Still, Lefaoali'i added that he was glad Fiame and FAST "stood their ground and continued to go forward."

On the question of the lawn ceremony's legality, University of Auckland faculty of law lecturer Dylan Asafo believes it was consistent with Fiame's calls to uphold the rule of law.

"If anyone has any doubts about the necessity of the swearing-in ceremony, they only need to think of the alternative situation that Samoa would be in, had FAST not convened parliament that evening," he said. He outlined a picture where Tuilaepa and appointed officials "would be free to call and suspend parliament and new general elections whenever they would like to."

Political tensions continue to simmer through the media. Tuilaepa has repeatedly lashed out, mocking Fiame and her party. They have hit back, accusing him of subverting rule of law.

Fiame supporters like Lefaoali'i view her as the one to lead the country into a new chapter. "I'm very optimistic for her as prime minister and for her party to be in power. Fiame speaks Samoan with the oratory metaphors of our ancestors, and she speaks English in a diplomatic and articulate manner that the rest of the world can understand and respect," said Lefaoali'i, who is focusing his Ph.D. on the Samoan diaspora.

"She has a lot of really good people in her party and she's a formidable force to be reckoned with herself," he added. "It feels like Samoa's going back to the people. She's going to put us on top."

But while her backers are hopeful, they are steeling themselves for what may be a long fight.

Other countries appear cautious about trying to tip the balance. 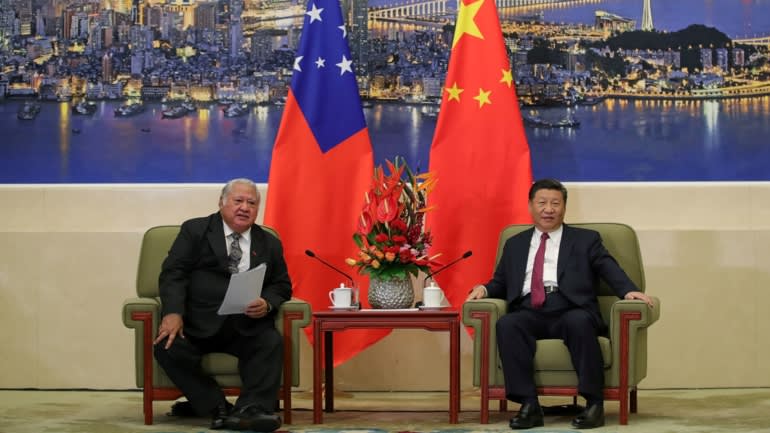 On May 25, New Zealand's Ministry of Foreign Affairs and Trade released boilerplate comments that the country "respects the sovereignty of Samoa," calling for all parties to "continue to uphold the rule of law." Samoa has "combined wisdom and experience of traditional and church leaders who will want to see a peaceful outcome," the statement said.

"China and Samoa enjoy good relations," he said. "Committed to the principle of non-interference in others' internal affairs, we believe that Samoa has the capability and the wisdom to properly handle its domestic affairs."

China, which recently unsuccessfully attempted to mediate in Nepal's parliamentary crisis, has grown its presence in the Pacific significantly in recent years. Fiame's stated intention to scrap a $128 million Chinese-backed port project has stirred talk that she might distance Samoa from Beijing, though she recently told Nikkei Asia that her government would not dramatically change the relationship.

Some were disappointed with New Zealand's careful wording. Asafo argued that leaders from the Pacific, including New Zealand and Australia, should condemn the "lawless conduct of the former prime minister and the head of state" while recognizing "the legitimacy of the FAST-led government in the interests of Samoa's democracy and the rule of law."

Asafo added that it is possible for other states to "respect the sovereignty and independence of Samoa, while also taking a stand to protect Samoa's democracy."

But there is perhaps another factor making New Zealand think twice about speaking out.

Island states' traditional partners -- Australia and New Zealand -- were once "much more active in making comments and urging the parties and islands to find resolutions," Ey said. But there has been a shift since Fiji's last coup led to a breakdown in relations, resulting in Fiji's ties with China "blossoming."

"Western powers are now much more reluctant to say too much because of that changed geopolitical context," Ey said.

Still, she said the events in Samoa are of concern for traditional donors and the international community. "For other smaller island states or other developing countries, you don't want Samoa to become a playbook or example of how to deconstruct a democracy and keep yourself in power."