Billionaire Xiao Jianhua reads a book outside the International Finance Centre in Hong Kong in December 2013. He was apparently taken from a hotel room in the city by mainland Chinese police on Jan. 27.   © AP Photo/Next Magazine
Politics

Xi Jinping and the 'man who knew too much'

TOKYO -- The disappearance of a China-born billionaire in Hong Kong has left the world wondering. If Xiao Jianhua really was abducted by Chinese agents in late January, as it appears, what did Beijing hope to gain?

The alleged kidnapping could bring heavy criticism upon the Xi Jinping government for violating Hong Kong's autonomy under the "one country, two systems" formula. This is a particularly sensitive time, given the international attention on Hong Kong's upcoming chief executive election. If China did snatch the 45-year-old from his serviced apartment at the Four Seasons on the eve of the Lunar New Year, it must have had urgent reasons to take the risk.

The full details of the case -- which harks back to the Hong Kong bookseller disappearances in 2015 -- may never be known. But it appears to be connected to the Chinese Communist Party's 19th National Congress this autumn, where the country's top leadership will be reshuffled.

As a young man, Xiao skipped grades and made an early entry to the prestigious Peking University. Amid the tumult of 1989, when the authorities carried out a bloody crackdown on pro-democracy protesters in Tiananmen Square, he led a group of students who took the government's side.

After graduation, Xiao went into business and enjoyed Communist Party support on his way to becoming a billionaire.

Now the pressing question is, what does he know?

The mystery is only deepening. Caixin, a Chinese economic journal, on Saturday reported that the head of the state-backed financial newspaper Securities Daily had been stripped of his party membership for disciplinary violations. Tomorrow Holdings, Xiao's financial group, is a major shareholder of the newspaper. 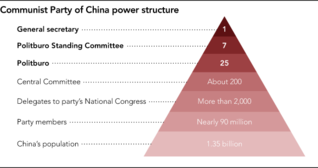 Insiders well-versed in China's complex economic machinery said Xiao knows how leaders control the markets. The insiders also leveled some staggering, albeit unsubstantiated, allegations: that Tomorrow Holdings manipulated the stock market via its industry newspaper, and that the group even triggered the market collapse in summer 2015.

The Chinese leadership, the insiders claim, acted to silence Xiao before the party convention.

Tomorrow Holdings is also said to be linked to other businesses that have faced political controversy, such as Luneng Group, a conglomerate based in Shandong Province, and China Minsheng Bank, the country's first privately owned bank.

Minsheng Bank was apparently tied to Ling Jihua, a former chief of the party's General Office who was sentenced to life imprisonment for abuse of power and corruption. Hailing from the Communist Youth League -- another key group within the party -- Ling was a close aide to former President Hu Jintao and ran the secretariat of the Zhongnanhai, the central headquarters of the party and government.

Zeng and Ling were among the key players in the murky power struggle before the last party congress, in 2012.

After Ling's son died in a Ferrari crash in Beijing in March 2012, some officials embarked on a behind-the-scenes effort to contain the repercussions. Big names caught up in this tangled web included Zhou Yongkang, a senior party leader later sentenced to life in prison for abuse of power and corruption; Zeng, who had promoted Zhou to the party leadership; Zeng's mentor Jiang; and Hu, who was Ling's boss.

The struggle climaxed at the party elders' annual summer meeting in Beidaihe in 2012, a coastal resort in Hebei Province. During the meeting, Jiang went after Hu for his apparent negligence of Ling's abuse of power, in the attempt to cover up the crash. Hu, who had not been fully aware of what his aide was up to, was caught off guard.

Ling was removed from his post as chief of the General Office soon after the Beidaihe meeting. The youth league faction then suffered a crushing defeat in the party leadership reshuffle. Li Keqiang, who had Hu's backing for the top party post, was chosen as premier, the second-ranked position. No other league members made it onto the Politburo Standing Committee -- the top seven rungs of the party hierarchy.

Xiao's disappearance suggests there are more behind-the-scenes machinations going on ahead of this year's party congress.

Many believe that Xiao, as a businessman with extensive political connections, has secret information on China's leaders and their families -- potentially including Xi. Given how the president has brought down so many foes with his anti-corruption campaign, he cannot afford to be tainted by leaks.

In short, Xiao may be a "man who knows too much."

This would not be the first time the Xi administration has moved to contain a perceived risk. Consider the case of Guo Guangchang, the chairman of investment giant Fosun International group. Guo, a billionaire known as the Warren Buffett of China, was detained at the airport in Shanghai in December 2015. Days later, he resurfaced in public.

Fosun said Guo was simply assisting the authorities with an investigation, but he has since kept a low profile.

At the time, people close to former President Jiang were being detained one after another in Shanghai. Word circulated that they were connected to Ai Baojun, a former vice mayor of the city who was under investigation by the party's anti-corruption agency.

Fosun and Tomorrow Holdings have some similar characteristics. Both are closely linked to top Chinese universities: The founders of Fosun include graduates from Fudan University in Shanghai, while Peking University is Xiao's alma mater.

But while the Xiao case has echoes of the Guo incident, it appears to be more serious. Many observers see it as a test of loyalty to the Xi administration. The message from the government is being interpreted as: "Join us or find yourself in deep trouble."

Sitting on the fence is not an option.

In China, even the rich and powerful can pay a heavy price if they play their cards wrong. One example is Xu Ming, the late founder and head of Dalian Shide Group -- a conglomerate once known for its professional soccer club.

Xu allegedly managed secret funds for Bo Xilai, then the mayor of Dalian. As Bo was subsequently sentenced to life in prison for corruption, Xu was also jailed as a "man who knew too much."

Xu mysteriously died in prison in December 2015, shortly before his scheduled release.

There are a couple of ways the Xiao case could play out: He could soon resurface, as if nothing happened, or he might remain in custody. His fate is likely to be determined by the ongoing battle for political dominance in Beijing.