Chinese leader may still be commander-in-chief in 2035, when he would be 82

TOKYO -- Mao Zedong, the founding father of modern China, never once set foot inside the walls of Beijing's Forbidden City. While he did sometimes stand on the rostrum of Tiananmen -- the southernmost gate of the sprawling 72-hectare complex -- including on Oct. 1, 1949, when he declared the establishment of the People's Republic of China, he intentionally avoided entering the former home of emperors.

Perhaps it was due to his belief that as the head of the Chinese Communist Party, a party that clenched power by opposing the feudal system of government, he should not be seen admiring the imperial sites. Since then, it has been somewhat of a taboo for China's top leader to walk inside the palace, although the leaders' office, Zhongnanhai, lies next door. 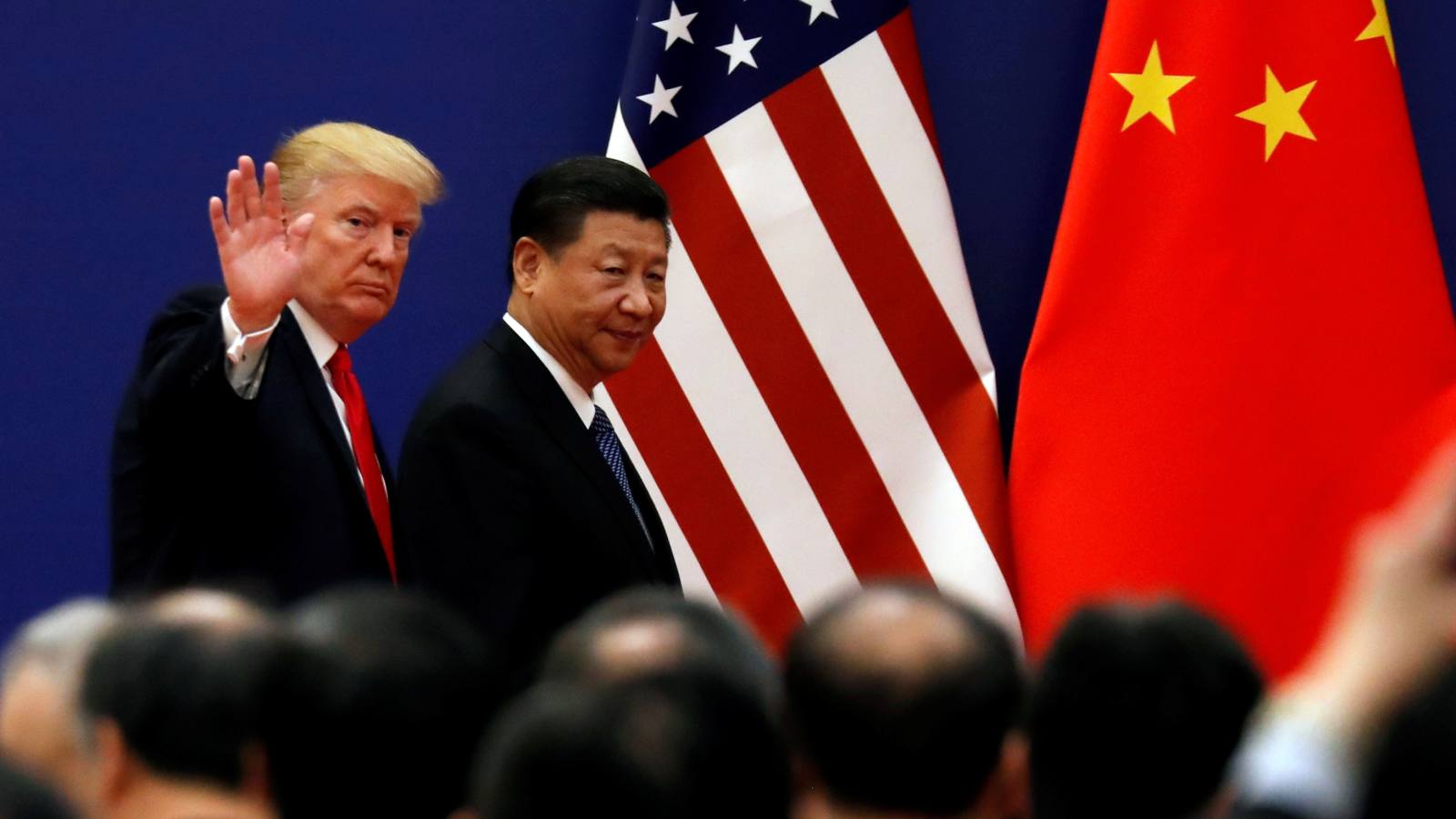 Was Trump's China trip more than a spectacular show?

When U.S. President Donald Trump and his wife, Melania, arrived in Beijing on Nov. 8, they were whisked to the Forbidden City. There, inside the walls of the former imperial palace, stood Xi with his wife, Peng Liyuan, beside him.

Xi had closed down the UNESCO World Heritage site for the day. And in an unprecedentedly lavish welcome, Xi himself took the American president and first lady on a tour of the vast compound. State-run China Central Television trumpeted the red-carpet treatment, carrying Trump's tour of the Forbidden City live and uninterrupted.

The highlight of the tour was an invitation to the Belvedere of Pleasant Sounds, the largest opera theater in the Forbidden City, where the leaders watched a performance of Peking Opera. The theater, Changyinge in Chinese, was built by the Qianlong Emperor, the sixth emperor of the Qing dynasty, who reigned from 1735 to 1795. Along with the Grand Stage at the Summer Palace and the stage at the Imperial Mountain Estate in Chengde, the Changyinge is counted as one of the three court theaters of the Qing Dynasty in its heyday.

Changyinge was reportedly not used for nearly a century, and just recently underwent a large-scale renovation.

Two years ago, Xi came close to breaking the taboo when he greeted foreign dignitaries in the square of Duanmen, one gate further inside from Tiananmen.

It was Sept. 3, 2015, the day of China's massive military parade, and foreign leaders such as Russian President Vladimir Putin and then-South Korean President Park Geun-hye were in town.

The guests were made to walk 70 meters on the red carpet laid in the Duanmen square before being greeted by Xi with a handshake. It was a highly unusual scene, one reminiscent of the ancient Chinese Empire. Under ancient China's tributary system, foreign rulers paid tributes to and had audiences with Chinese emperors in return for their recognition.

The daring performance drew criticism from some within the Communist Party. But the Duanmen ceremony was held just a stone's throw away from Tainanmen. This time, Xi took Trump deep inside the holy sanctuary. 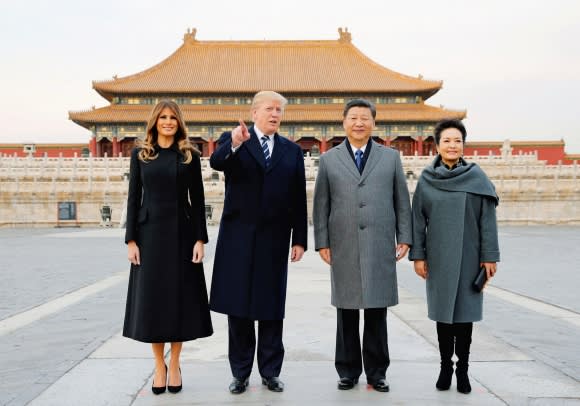 U.S. President Donald Trump and his Chinese counterpart, Xi Jinping, are flanked by their wives during a tour of the Forbidden City in Beijing on Nov. 8.   © Reuters

While in the Forbidden City, Xi held backroom discussions with Trump about North Korea's nuc

lear and missile programs. The Trump administration has urged China to step up pressure on its neighbor's nuclear- and missile-minded government.

Trump and North Korea's Kim Jong Un have been engaged in a war of words for months now. The Trump administration has warned that all options are on the table.

But Xi cannot accept Trump's demand to halt trade with North Korea. Using military force against North Korea is out of the question for China. Were the North Korean regime to collapse, Communist China would face an unprecedented security situation along one of its borders.

Xi wanted to deflect pressure from Trump, thus the flattering welcome and the unveiling of $250 billion worth of business deals between the two countries.

Trump visited China with a video of his young granddaughter, Arabella Kushner, singing a Chinese song. Trump used a tablet to show the video to Xi. Arabella's mother is Ivanka Trump. Arabella Kushner, granddaughter of U.S. President Donald Trump, sings traditional Chinese songs in a video shown at the state dinner at the Great Hall of the People in Beijing on Nov. 9.   © Reuters

The video of the little girl would later become a tool to further flatter Trump: The Chinese government borrowed it and displayed it on a large screen at the Great Hall of the People.

Trump looked happy, just as his Chinese hosts had wanted.

Perhaps, Trump might have thought, some gratitude was in order. After all, that business package might help him fulfill campaign promises to create jobs and cut the U.S.'s yawning trade deficit.

So Trump faulted his predecessors rather than Beijing for the trade imbalance. "I do blame past administrations for allowing this out-of-control trade deficit to take place and to grow," he said.

This was music to the ears of many Chinese. Even the Global Times, an outspoken newspaper, sang Trump's praises. "Trump is one of the most popular heads of state on the Chinese Internet, and generally the Chinese public holds a positive attitude toward him," the paper's editorial said on Nov. 9.

The Global Times, which is affiliated with the People's Daily, the party's mouthpiece, cited three reasons for Trump's popularity in China.

"[The] Chinese appreciate his directness, which is in sharp contrast to Hillary Clinton, who always puts on airs."

"Trump seems to be pragmatic on his Beijing policy, and has no interest in ideological diplomacy."

By stabilizing China's relations with the U.S., Xi wants to pave the way for a sort of G-2 system in which China and the U.S. would manage all global affairs.

Chinese government spokespeople had been rejecting the G-2 concept, but in the press conference with Trump on Nov.9, Xi did not try to hide his intention: "As I said to the president, the Pacific Ocean is big enough to accommodate both China and the United States," he said.

By making the remark, Xi revived his proposal for China and the U.S. to divvy up trade and security interests in the Pacific.

It is now clear that there is no candidate to succeed Xi at the next national congress in 2022.

There is growing speculation, even among ordinary Chinese, that Xi intends to stay in power after serving two five-year terms as the party's general secretary and as the country's president.

There have been online posts mocking Xi's widely perceived political ambitions, although they are immediately deleted by authorities.

One such post said, "I have heard that the Communist Party's national congress set a target of realizing modernization by 2035. Does President Xi really intend to stay in power until 2035?"

Another netizen responded: "I believe so. President Xi will turn 82 in 2035. Mao Zedong died at exactly the same age after continuing to keep his status as chairman of the party. The 2035 target appears to suggest Xi's intention." The growing speculation about Xi's possible reign until 2035 cannot be dismissed as unfounded. Pieces of indirect evidence -- such as bold changes to party constitution during the recent national congress -- support the speculation.

First, some background. China has two Central Military Commissions, one that belongs to the Communist party and another that belongs to the state. Xi heads both and the two commissions consist of the same members, but the party commission plays first fiddle. The People's Liberation Army is primarily a military that serves the party.

The Chinese constitution stipulates that "the Chairman assumes overall responsibility for the work of the Central Military Commission."

The same language is now included in the party constitution, having been inserted during the recent national congress.

Put simply, the words imply that ultimate authority over military affairs rests with the party commission chairman, the unquestioned commander-in-chief. Most importantly, the amendment made clear that the chairman of the party's Central Military Commission, not the Chinese president or the party's general secretary, has the final say regarding military action.

Herein lies a window into Xi's future plans. Even if Xi were to step down as the party's general secretary in 2022 and then as the country's president in the spring of 2023, following past practice, he would still wield enormous influence if he retained the chairmanship of the party Central Military Commission, which has no rules on retirement. He could continue to be China's most powerful leader.

In fact, within the military Xi has been referred to zhuxi, chairman, instead of shouzhang, leader or commander. This has been going on since summer.

The sweeping revision of the party constitution, including the incorporation of Xi's eponymous ideology, is tantamount to rewriting the party's history.

The new party rules containing Xi's eponymous ideology have effectively declared the arrival of a third era. The years under Xi's two immediate predecessors, Jiang Zemin and Hu Jintao, are now sinking into oblivion. According to Xi's view, there was Mao, there was Deng, and now there is Xi.