With or without Wang, president's anti-graft purges to endure through 2022

TOKYO -- The past five years have been an "extraordinary" period in China, or so says the communique issued at the end of a key gathering of the Chinese Communist Party on Saturday.

The five years point to the period that General Secretary Xi Jinping, who doubles as the country's president, has been in power.

"China has witnessed deep and fundamental changes over the past five years, while its achievements are comprehensive and groundbreaking," the party members agreed at the four-day Seventh Plenary Session of the party's Central Committee.

The thinly veiled statement is meant to portray that the five years prior to it were far from memorable, those under predecessor Hu Jintao, which the Xi regime regards as the dark years when reform stalled.

The axe-grinding reflects the vicious power struggle taking place beneath the surface between the current and previous leadership leading up to the party's 19th national congress to begin on Wednesday. Most of the top leadership body, the Standing Committee of the Politburo, will be replaced at the quinquennial gathering. 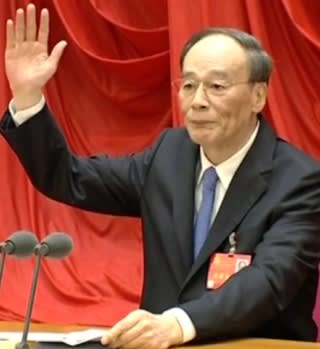 First and foremost of those "extraordinary" achievements, in the eyes of the leadership, is Xi's signature anti-corruption campaign, spearheaded by long-time ally Wang Qishan. Xi has been using the crackdown to rid the political landscape of his foes.

More than 2 million officials have fallen victim to the corruption crackdown in the past five years. They include both "tigers and flies," a reference to senior and low ranking officials. The most recent tally shows that 280 officials at or above the vice minister level and 8,600 officials at the bureau or department chief tier have been caught.

On Oct. 9, Wang chaired a plenary session of the party's Central Commission for Discipline Inspection, which he is head of. China's state-run news outlets said that Wang delivered a speech there, but exactly what the anti-graft czar said has not been made public.

That could be because the context of his words, or the organizational reforms that were discussed and decided upon at the plenary session, are directly connected to political battle taking place, including what happens to the new line up of the top leadership.

Whether Wang himself, a 69-year old Politburo Standing Committee member, will stay on despite being past the unofficial retirement age of 68 is one of China's juiciest intrigues at the moment. 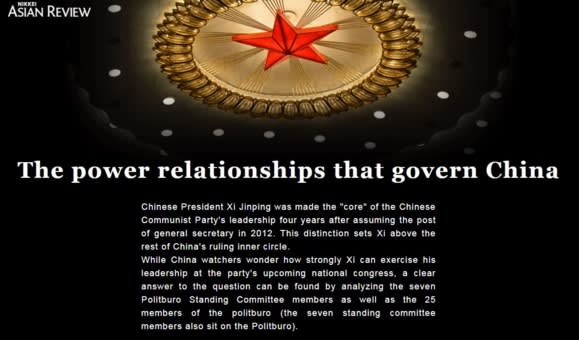 One reform that has been made public is the formation of a state-run "national supervisory commission" in 2018, as an upgraded and more powerful new institution to crack down on corruption.

Wang's Central Commission for Discipline Inspection, or CCDI, is a function of the Communist Party and is supposed to clamp down on only corrupt party members. But in reality, in collaboration with China's cabinet the State Council, Wang's CCDI has effectively cast its net over all Chinese.

Despite being a party body, not the state, the discipline commission can arbitrarily detain even non-party members. This is a major contradiction and can even be said to be illegal.

This is why Beijing is now moving to establish the "national" supervisory commission, which will reportedly watch over some 200 million people -- civil servants, semi-public workers and ordinary citizens working at public institutions.

To back the new national supervisory commission, Wang's CCDI too is expected to be reorganized and given more power and importance.

The Communist Party has always had a discipline commission and used it to maintain order in the organization. The CCDI has roots in a body called the Central Control Commission which existed before the 1949 founding of the People's Republic of China. 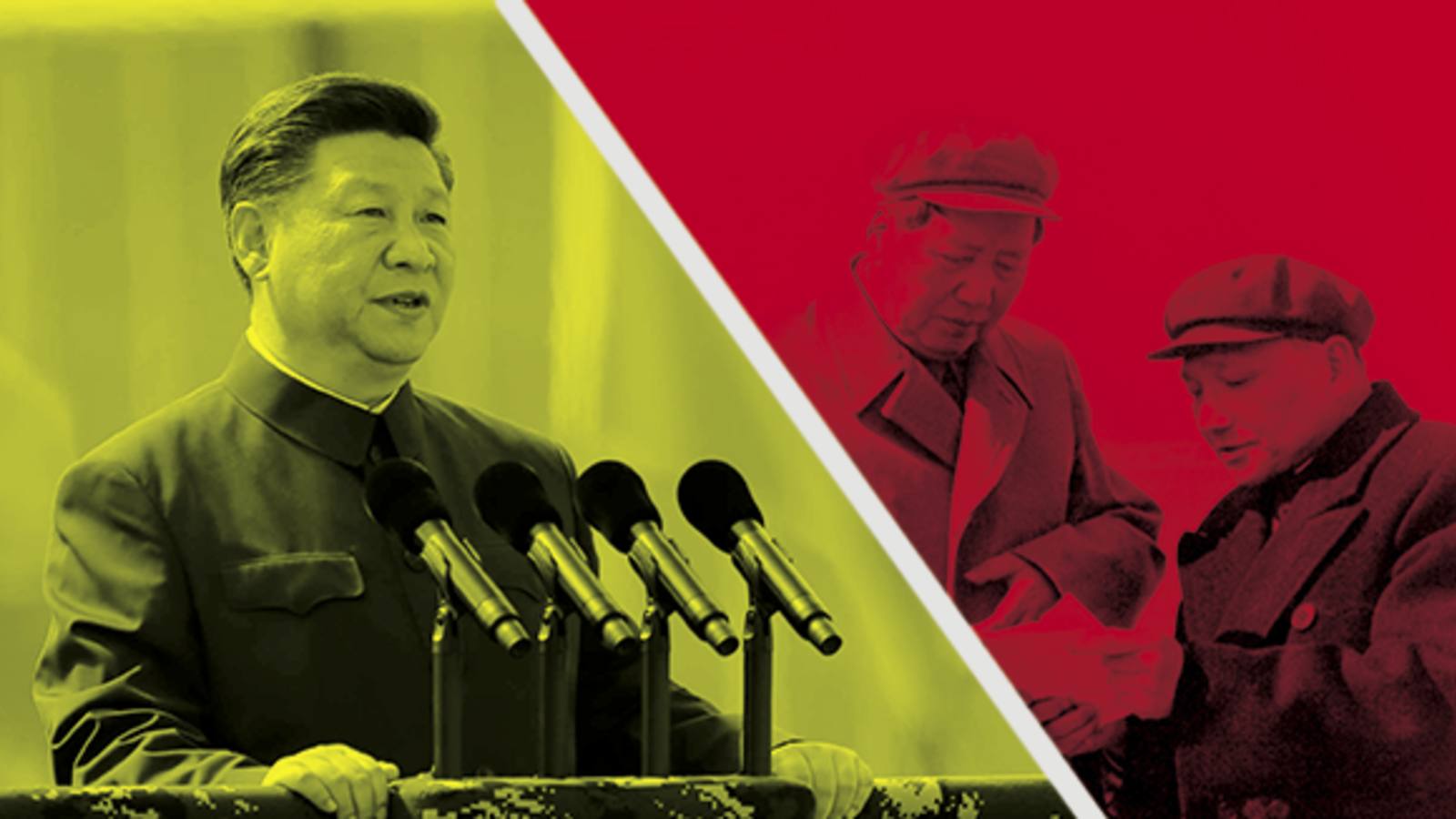 Xi's reforms of the disciplinary bodies are intended to once again restore strict supervision over civil servants and others.

The anti-corruption campaign has succeeded in giving Xi powers not seen in decades and will continue to be the Chinese leader's most powerful tool in his political arsenal. 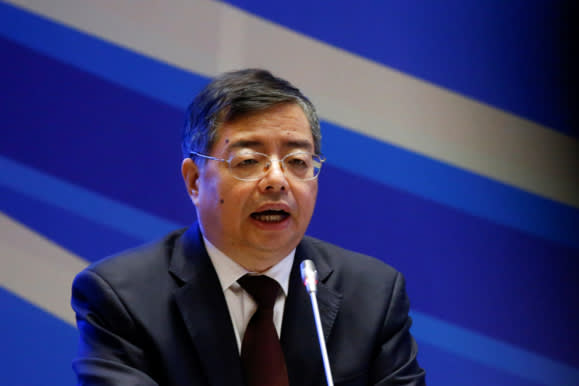 Li Shulei, Deputy Secretary of the Central Commission for Discipline Inspection, speaks during a forum on global corruption and financial fraud in Beijing, China on September 19.   © Reuters

One key figure in these drastic reform plans is Li Shulei, the 53-year-old longtime speech writer of Xi, who is currently deputy secretary of the CCDI. He heads the CCDI's "fox hunt" for corrupt fugitives who have fled abroad.

Born in 1964 in Henan Province, Li was widely considered a child prodigy. He earned outstanding grades despite often skipping class at his primary and junior high schools.

For Li, attending school was a boring task and gave him no knowledge or skills that his highly literate family members had already taught him at home. After multiple advanced placements Li entered Peking University, one of China's most prestigious universities, at the age of 14 to study library science.

Li has gone quickly from one post to another in recent years, all at Xi's behest.

In 2008, Li was promoted to deputy president of the Party School of the Communist Party's Central Committee, also known as the Central Party School, which trains party cadres. He was 44 at the time.

Li served as the school's deputy president until 2012. The school's president during that period was one Xi Jinping. Xi took note of Li's exceptional talent, and has since used him as his lead speechwriter. Xi's speeches are known to be rich in historic references and proverbs, and Li is seen to have been the brains behind them.

In early 2014, Li was sent from the Central Party School to Fujian Province to serve as head of the propaganda department at the party's provincial committee. Fujian has a special place in Xi's heart, having spent nearly 17 years in the province when he was young and marrying his wife -- national singer Peng Liyuan -- there.

Since 2015, Li has been brought into Xi's inner circle handling the most sensitive of political issues: anti-corruption.

From prodigy to protege

At the end of 2015, Li was summoned back to the capital to serve as secretary of the party's Beijing commission for disciplinary inspection. Back then, Beijing was still under the heavy influence of former presidents Jiang Zemin and Hu Jintao.

Xi wanted one of his own men to lead the anti-corruption charge in the capital and Li was the chosen one. The one-time child prodigy was now being groomed to serve as Xi's protege. Looking back now, Li was being tasked with preparing for the new national supervisory commission.

In January this year, Li was promoted to deputy secretary of the CCDI. He had become the right-hand man of Wang Qishan, arguably China's second most powerful politician.

Li has changed positions three times in as many years, rising higher through the ranks with each move. The question of what post he will assume next has drawn increasing attention.

Given his recent track record, Li seems destined to assume a key role in the soon to be created national supervisory commission. Or he may be given the reins to the newly strengthened CCDI.

In either case, Li will find himself in the nerve center of Xi's anti-corruption campaign.

The two disciplinary bodies will prove to be the power-hungry Xi's most powerful weapon yet, something that he will rely heavily on if he is keen to extend his reign after his second five-year term as party chief expires in 2022.