National congress wraps up with Xi firmly at the head, and with a vision spanning decades

BEIJING The Chinese Communist Party's twice-a-decade national congress commonly discusses the plans and visions for the upcoming five years. This time was different.

The year 2049 is the 100th anniversary of the People's Republic of China's founding. Xi's two-stage blueprint first aims to realize socialist modernization by 2035 and then turn China into a fully developed nation -- a global leader on par with the U.S. -- by 2049.

This is to be driven by a stronger economy and military but also by advances in science and technology, as exemplified by the BeiDou Navigation Satellite System, China's version of the GPS.

MAKE CHINA GREAT AGAIN At the party congress, Xi succeeded in filling the top leadership with his allies and also having his eponymous ideology incorporated into the party's guide to action. The latter part is the more significant.

"Xi Jinping Thought on Socialism with Chinese Characteristics for a New Era." Xi's close aides struggled until the last minute to have their boss's name enshrined in the party constitution. 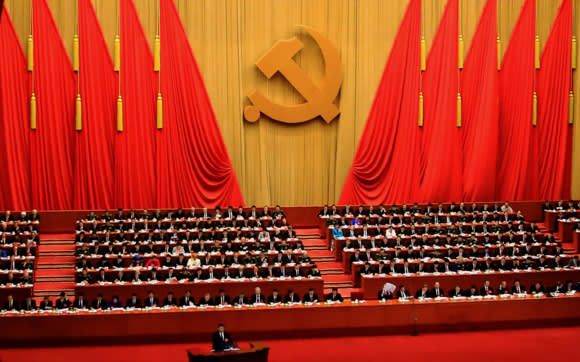 Xi made major strides in consolidating his power at the twice-a-decade congress.(Photo by Akira Kodaka)

Only Mao and Deng had their names attached to their ideologies. Furthermore, the status of a "thought" is higher than that of a "theory," which means that "Xi Jinping Thought" enjoys a higher elevation than "Deng Xiaoping Theory."

The decision to incorporate the "Xi Jinping Thought" was sealed when three members of the rival Jiang Zemin faction referred to the Thought during panel discussions held on the sidelines of the opening session on Oct. 18.

Those three were Zhang Dejiang, the third ranking member of the previous leadership and Chairman of the Standing Committee of the National People's Congress, roughly the equivalent of a speaker of parliament; Yu Zhengsheng, the number four and Chairman of the Chinese People's Political Consultative Conference, a political advisory body; and Liu Yunshan, the number five and head of propaganda and ideological indoctrination.

"The Thought is the biggest highlight of the national congress and a historic contribution to the Party's development," said Zhang Dejiang.

"This important thought represents the latest achievement in adapting Marxism to the Chinese context, and is an important component of the system of theories of socialism with Chinese characteristics," Yu Zhengsheng said while joining another panel discussion.

The flurry of activity inside the Great Hall signaled that negotiations were going on until the very end.

Midway through Xi's speech, a secretary approached Ding Xuexiang, the director of Xi's office, and whispered something in his ear, showing him a piece of paper. The discussion went on for a while.

Then the secretary went over to Li Zhanshu, sitting in the front row of the stage. Here again, the two looked at a piece of paper and whispered to each other. Li is Xi's closest aide and director of the general office of the party. Li and Ding were the two key players working behind the scenes to promote the Thought.

Next, the secretary walked over to Liu Yunshan, the number five and showed him the piece of paper. Liu subsequently leaned over to Zhang Dejiang, the number three sitting next to him to whisper further.

In front of the curious eyes of the global media, the groundwork was done.

When Xi returned to his seat, Hu Jintao stood up to shake his hand. Gesturing to his watch, a friendly Hu appeared to note that it was quite a long speech, demonstrating his camaraderie with Xi.

NO SUCCESSOR CANDIDATE The Communist Party's weeklong 19th national congress closed on Oct. 24 after about 200 members were elected to the Central Committee and the party constitution was revised.

In addition to having his ideology enshrined in the party constitution, Xi made another move that has been widely seen as part of his efforts to further consolidate power and extend his reign beyond the next party congress, in 2022. President Xi Jinping introduces the new lineup of the Politburo Standing Committee at the Great Hall of the People on Oct. 25.   © Reuters

He left two figures widely seen as potential candidates to succeed him -- Hu Chunhua and Chen Min'er -- off the new Politburo Standing Committee. There had been speculation that Hu and Chen would both be promoted to the powerful committee.

The state-run Xinhua News Agency reported on Oct. 28 that Li Xi, the party secretary in Liaoning Province, has been appointed as the new party secretary in Guangdong, replacing Hu. Li is seen as close to President Xi and had just been promoted to the Politburo three days earlier.

Xi made a splash with his break from tradition regarding the formation of the new Politburo Standing Committee. If he had followed custom, he would have narrowed down the number of candidates to succeed him. Back in 2007, Xi himself emerged as a shoo-in to take over from Hu Jintao as general secretary and president five years later.

Meanwhile, Xi could not retain his right-hand man, the anti-corruption czar Wang Qishan, who was past the retirement age of 68. The 69-year-old was not elected even to the new Central Committee.

Under the national constitution, a Chinese president can serve up to two five-year terms, which means Xi is supposed to retire as Chinese president in 2023. But there is no such restriction on the number of terms a party general secretary can serve.

Xi's two immediate predecessors, Jiang and Hu, relinquished both the top party and government posts almost simultaneously when they retired.

Xi will be 69 when his second five-year term as party chief expires in 2022. But he is likely thinking that the need for a successor is more than five years off. One possibility is for Xi to acquire the title of "party chairman," a status one notch higher than the "core" leader. Only Mao Zedong has held the title to date.

This could be why he is nipping a possible full-fledged succession race in the bud.

During the just-concluded party congress, the five Politburo Standing Committee members other than Xi and Premier Li Keqiang retired. All had come up against the traditional retirement age. The five new committee members are Li Zhanshu, Wang Yang, Wang Huning, Zhao Leji and Han Zheng. All are in their 60s.

None are from the generation born in the 1960s, like Hu Chunhua and Chen Min'er, who had been on track to move into the party spotlight at the 2022 national congress.

Instead, Wang Huning, who heads the Central Policy Research Office, and Han Zheng, Shanghai's top official, were promoted to the standing committee. Wang is a policy expert. Han has administrative experience only in Shanghai.

Wang earned the unlikely promotion by playing a role in forging a consensus on how to enshrine Xi's ideology in the party constitution. He has served three presidents: Jiang, Hu and now Xi.

While Wang belongs to no particular faction, Han is widely seen as close to the faction led by former President Jiang Zemin, also called the Shanghai faction. But Han should be seen as a representative of Shanghai's interests as he has maintained good relations with all factions.

Since taking the helm of the country five years ago, Xi has given many close aides unusually big promotions one after another to gain the upper hand in his power struggle.

The latest leadership shuffle is no different. Xi and people close to him now hold majorities in the seven-member Politburo Standing Committee and in the 25-member Politburo.

CULT OF PERSONALITY Of the 25 members of the Politburo, there are currently at least 15 who can be said to belong to the Xi faction, or 60% of the total. This means Xi can push through his agenda by majority vote.

There are growing signs of a personality cult being built around Xi. Internet controls are being further tightened to censor content and stifle dissent. The crackdown is affecting the country's politics, economy and society.

The party's long-standing rule banning "any form of personality cult" was introduced after Mao's death, tacitly recognizing that Mao launched the Cultural Revolution to take down his political foes and was propped up by propaganda encouraging Chinese to idolize him.

The recent praising of Xi is reminiscent of the Mao era and has raised concerns among many intellectuals in the country; such activities could infringe on at least the spirit of the party ban on personality cults.

On Oct. 19, a day after Xi delivered his long address at the outset of the party congress, provincial leaders spent discussion sessions competing to praise his ideology.

In Chinese, "Xi Jinping Thought on Socialism with Chinese Characteristics for a New Era" is written in 16 characters. It is a mouthful to say and difficult to remember. In fact, one provincial leader stumbled over the words several times when he tried getting through the 16 characters.

"Xi Jinping Thought on Socialism with Chinese Characteristics for a New Era" is the result of the political gamesmanship that the rival factions played when it came to deciding exactly how party rules would incorporate Xi's ideology.

The struggle had gotten underway in August, at the "Beidaihe meeting," where China's incumbent leaders and retired party elders get together every year to informally discuss important issues behind closed doors. 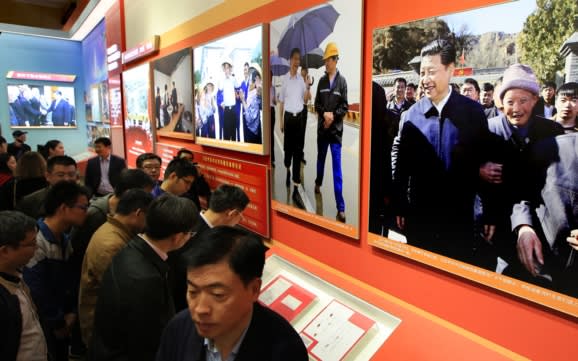 An exhibition in Beijing highlighted achievements under five years of Xi's leadership.(Photo by Akira Kodaka)

Xi's ideology will be widely studied by people both inside and outside the Communist Party and trumpeted in a new propaganda campaign as "Xi Jinping Thought," which consists of five characters in Chinese and is much easier to remember and say.

State-run China Central Television has already broadcast footage of primary school pupils in a poor area of Guizhou Province expressing their gratitude to Xi. And the efforts to get Chinese to join a chorus of hymns to a new era under Xi is targeting people from all walks of life -- even the country's religious minorities.

In his speech on Oct. 18, Xi said China's "flourishing" growth model under Communist rule has given "a new choice" to other developing countries and declared that the time has come for China to "take center stage in the world." Media outlets have widely quoted these words.

Xi's growing confidence comes as he presses ahead with his Belt and Road initiative -- a massive undertaking meant to create a modern-day Silk Road trade route between China and Europe.

China's moves and systems are unique, as exemplified by the officially orchestrated chorus of praise for Xi. Now the belt and road trade corridors could carry this highly controversial style of rule to much of the rest of Asia, Africa and the West.