Vice Premier Liu He pauses after casting his ballot at the National People's Congress in Beijing on March 19.   © Reuters
Politics

BEIJING -- Chinese President Xi Jinping's trusted allies have taken charge of the economy and foreign affairs in the latest leadership shuffle, bringing together a wealth of expertise to clear hurdles the leader could face in his second and successive terms.

The National People's Congress on Monday elevated Liu He, a top economic adviser and old friend to Xi, to the post of vice premier, just months after the Communist Party's twice-a-decade National Congress handed him a seat in the powerful Politburo. Xi has told U.S. government officials that the economist, educated at Harvard University and the Renmin University of China, is extremely important to him.

Meanwhile, Yi Gang has been promoted from deputy governor to governor of the People's Bank of China, replacing outgoing central banker Zhou Xiaochuan. Yi, a former academic who taught at Indiana University in the U.S., has ties going back years with Liu, who named Yi his deputy when he was appointed head of the party's top economic policymaking body.

Yi is amply qualified as governor, having worked at the central bank since the 1990s after returning from the U.S. Yet many had ruled him out as a candidate for governor after he failed to land a seat in the party's Central Committee last fall -- a bar that top officials at banking and securities watchdogs managed to clear despite the fact that their agencies sit lower in the Chinese government hierarchy than the central bank.

Liu could be behind the president's apparent change of heart on Yi. Compared to peer institutions in the U.S. and Europe, China's central bank is strongly tied to the administration as a unit of the State Council. Its governor is in effect the executive tasked with implementing China's monetary policy as formulated by the government. Yi's fluent English and on-the-job competence likely helped Liu sell him as a capable replacement for Zhou, who has led the PBOC for roughly 15 years. 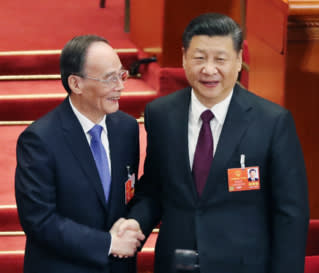 Guo Shuqing, head of China's banking regulator, is also a member of Team Liu. Other supporting players include China's minister of commerce and minister of industry and information technology, as well as the chief of the National Development and Reform Commission -- all Xi allies that kept their posts amid Monday's leadership changes.

Foreign investors are eager to see how aggressive Liu and his team will be in taking on China's pile of bad debt and reforming state-owned enterprises to make them more market-friendly. In general, many expect reforms to continue. Liu told an international gathering in January that China aims to stabilize its ratio of debt to gross domestic product in around three years.

But issues with state enterprises could prove more difficult to address. During his first term as president, Xi issued repeated calls to make those businesses "stronger, better and bigger." While Liu, Yi and their allies are seen as reformers, it is ultimately Xi who will determine the direction of economic policies. Rapid reform could lead to social unrest, making it incompatible with Xi's ultimate goal of a long and stable time on top.

The president's allies have also solidified their control over China's foreign policy. Wang Qishan, the mastermind behind Xi's sweeping anti-corruption campaign, was named vice president. He is known as a highly capable administrator with a knack for crisis management, and has a unique network in the U.S. Wang handled Chinese-American economic relations during his time as vice premier, and last year met with Steve Bannon, a political strategist who played a pivotal role in U.S. President Donald Trump's campaign and early administration. Many expect Wang to tackle U.S.-China trade friction as Xi's deputy.

Chinese Foreign Minister Wang Yi will continue in that post and has gained another as state councilor, taking the seat previously held by Yang Jiechi, who also preceded Wang as foreign minister. Wang has managed to quell conflict over China's expansion in the South China Sea without compromising on the issue, earning a reputation as a highly capable foreign minister. He also has ties to the party's old guard, having married the daughter of former Premier Zhou Enlai's secretary. Wang has been effusive in his praise of Xi, saying in a press conference March 8 that the president's "leadership and charisma has earned him -- and his country -- many good friends among foreign leaders." Yi Gang has been promoted from deputy governor to governor of the People's Bank of China.   © Reuters

Yang, whose past roles include ambassador to the U.S., is unlikely to stay away from diplomacy for long. He was elevated to a seat in the Politburo last fall, and around the same time released a piece of writing calling for the party to set China's diplomatic agenda. Many expect him to take a critical role on the party's foreign affairs leading group, which is directly accountable to Xi. While Yang has no formal government title at present, he "will continue to handle China's foreign relations, whatever his official post," a party source said. Some predict he will be tasked with managing the growing anti-Chinese sentiment among U.S. lawmakers.

Softening that attitude is a pressing problem for Xi as he embarks on his second term as president. Tapping three experienced hands could help him do just that, without making compromises that could gain him a reputation for weakness at home.

Questions about Fu's political future had been swirling since Guo Wengui, a Chinese business magnate living in exile in the U.S., revealed that Fu ordered an investigation into Wang Qishan's family finances. But his new appointment suggests Fu remains in Xi's good graces.

Wei Fenghe will serve as national defense minister and state councilor, having previously served as chief of China's strategic missile force. He is thought to be close to Xi, who elevated Wei to the rank of general in November 2012, just days after becoming General Secretary of the Communist Party.