"All eyes were on the big event in Nanjing at the time, but President Xi's trip to Zhenjiang was significant," a Beijing source familiar with Chinese politics said.

Xi delivered a speech in Nanjing, Jiangsu's capital, on Dec. 13 during China's first state-sponsored ceremony of National Memorial Day for Nanjing Massacre Victims. He moved on to Zhenjiang the same day.

After retirement, Jiang continued to wield enormous political influence. Zhenjiang, an ancient and strategic city, has a population of 3 million. Its name literally means "bringing Jiang under control." Xi visited the city to send the message to the national population that this is exactly what he intends to do. 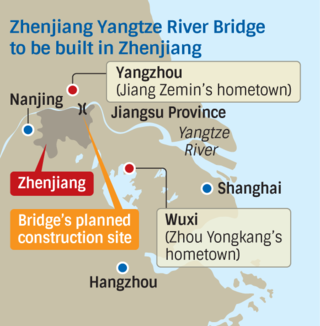 Yangzhou, Jiang's hometown, is just across the Yangtze River from Zhenjiang. Key Chinese figures have so far refrained from visiting Zhenjiang out of consideration for Jiang.

No bridge in recent times has included "Zhenjiang" in its name, out of respect for the former leader. The Runyang Yangtze River Bridge was completed in 2005, linking Zhenjiang and Yangzhou across the river. The 35km-long bridge cost 5.3 billion yuan ($855 million) to build.

When the project was still being planned, rumors spread locally that Jiang frowned when he learned its tentative name was the Zhenjiang Yangtze River Bridge. Local officials and others feared dismissal. The bridge's naming became a serious political issue that could determine the fate of the local community.

The bridge was thus eventually given its current name. The run from Runyang came from Runzhou, Zhenjiang's former name. There is no doubt that Jiang was satisfied with the naming.

Amid Xi's anti-corruption campaign, bridge naming has drawn fresh attention. The campaign is widely believed to be a tool for Xi to consolidate his grip on power. Jiangsu Province is the stronghold of the Jiang group. Zhou Yongkang, the indicted former member of the Politburo Standing Committee, the Chinese Communist Party's top decision-making body, was also born and grew up in Wuxi, Jiangsu Province.

Wuxi is close to Jiang's hometown of Yangzhou and Zhenjiang. Zhou, who fell victim to President Xi's anti-corruption campaign, is a key member of the Jiang group.

Xi's Zhenjiang visit came eight days after the Politburo of the Communist Party expelled Zhou from the party. Xi went to the stronghold of the Jiang group to show he would face up to any resistance. 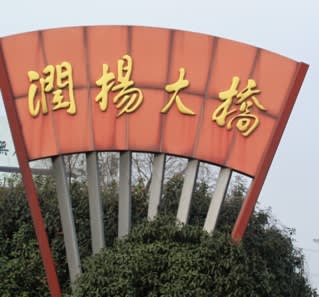 Located on the north side of the Runyang Yangtze River Bridge is a signboard with the name of the bridge written by former Chinese President Jiang Zemin.

Jiang's ideological legacy is his theory of the "Three Represents," enshrined in the Communist Party's constitution. In Zhenjiang, Xi announced the "Four Comprehensives" as new guiding principles, effectively declaring the end of the Jiang era. Xi's leadership has continued to attack Jiang's stronghold since the visit.

Yang Weize, the top official of Nanjing, was in January taken away from the city to Beijing by investigators from the Central Commission for Discipline Inspection in connection with the Zhou corruption case. Yang is close to Jiang as well as Zhou.

Jiangsu Province officials are fully aware that Xi has turned the tables on the Jiang group. If they continue to follow Jiang, they know their political fortunes are threatened. China Railway, whose predecessor is the railway ministry, kicked off construction work on a new bridge in Zhenjiang late last year.

Its name did not originally include the word "Zhenjiang." In mid-January, a number of local officials visited Beijing and asked China Railway to change the name of the new bridge to "the Zhenjiang Yangtze River Bridge." China Railway accepted the request.

Full-scale construction work on the new bridge is expected to start in June or later. The Jiang taboo has been broken.